Heavy monsoon rains since Friday, August 11, 2017 caused massive flooding and landslides in parts of Nepal, killing at least 36 and displacing thousands. Dozens are still missing. At the same time, the flood situation in India's state of Assam worsened drastically and claimed at least 5 people today. The region will receive more heavy rain in the days ahead.

Many of the casualties were reported in the Terai region of Nepal bordering India, which faced massive flooding, the Hindustan Times reports.

Several rivers, including the Koshi and the Bagmati are close to or have crossed danger levels. Deputy Prime Minister and foreign minister Krishna Bahadur Mahara requested India open the gates of the barrage on the Koshi, also called the 'sorrow of Bihar,' as rising water levels in the river have put dozens of human settlements at risk.

However, by opening the gates, parts of India too would be under risk of submergence, the river has become a regular diplomatic issue between Nepal and India during the rainy season.

The Government of Nepal requested the people residing in the low lying southern plains of Nepal as well as residents near the river to get to the higher grounds claiming the condition might last for some more days.

At least 47 people have been killed by late Sunday, August 13 while at least two dozen others are still missing and feared dead. Around 31 000 families have been displaced. 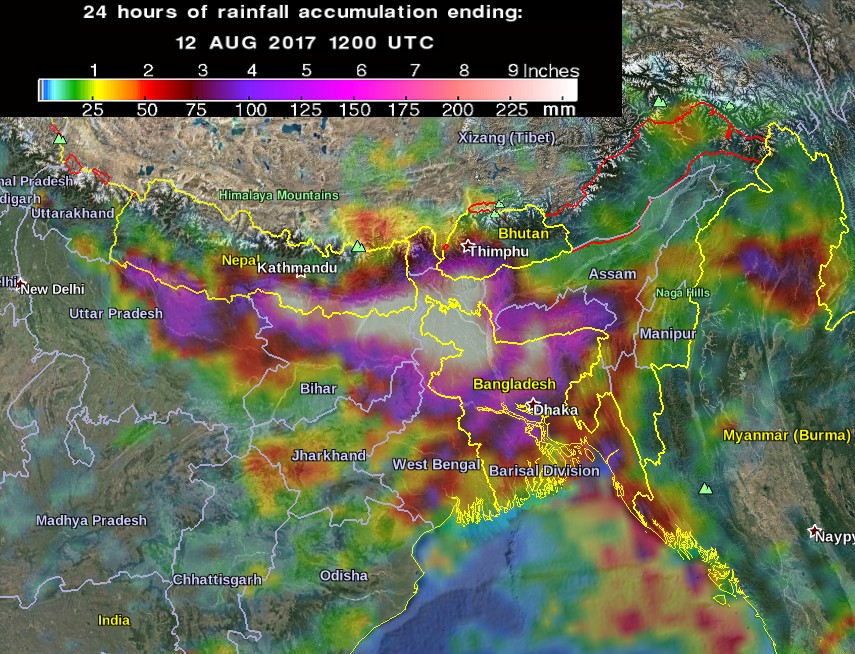 According to the Assam State Disaster Management Authority (ASDMA), two persons died in Dhemaji and one each in Lakhimpur, Kokrajhar and Morigaon districts. With this, the total number of persons killed in flood-related incidents across Assam this year rose to 89, including eight in Guwahati.

The ASDMA report said Dhubri is the worst hit with 192 000 people affected, followed by Dhemaji where 151 000 have been affected. Current, 1 752 villages are under water and over 100 000 hectares of crops has been damaged.

It is expected to continue over the coming days.