Heavy monsoon rains caused deadly floods and landslides, killing at least 68 people throughout southeast Bangladesh on June 13, 2017. Most of the deaths were caused by landslides. Officials fear the death toll will rise as rescue workers reach remote areas.

Bangladesh authorities said many of the victims were from tribal communities in the remote hill district of Rangamati, close to the Indian border, where at least 35 people died after mudslides buried their homes.

"Some of them were sleeping in their houses on hillsides when the landslides occurred," district police chief Sayed Tariqul Hasan told AFP. Six were killed in the nearby district of Bandarban, among them three children – siblings who were buried by a landslide as they slept in their home. Another 16 of the casualties were in the neighboring district of Chittagong, where at least 126 people were killed when a massive landslide buried a village a decade ago.

Among the victims were at least four soldiers who had been sent to clear roads in Rangamati district after an earlier landslide. "The soldiers were sent to clear roads hit by a landslide in Manikchhari town when they themselves buried by a second landslide," armed forces spokesman Lieutenant Colonel Rashidul Hassan told AFP.

Heavy monsoon rains also affected the capital Dhaka and the port city of Chittagong, with as much as 222 mm (8.7 inches) of rain, disrupting traffic for hours.

A ferry sank in the river Buriganga on Monday, June 12, with an estimated 100 passengers onboard. Although initial reports mentioned 10 missing people, river police official told AFP all passengers managed to swim ashore. 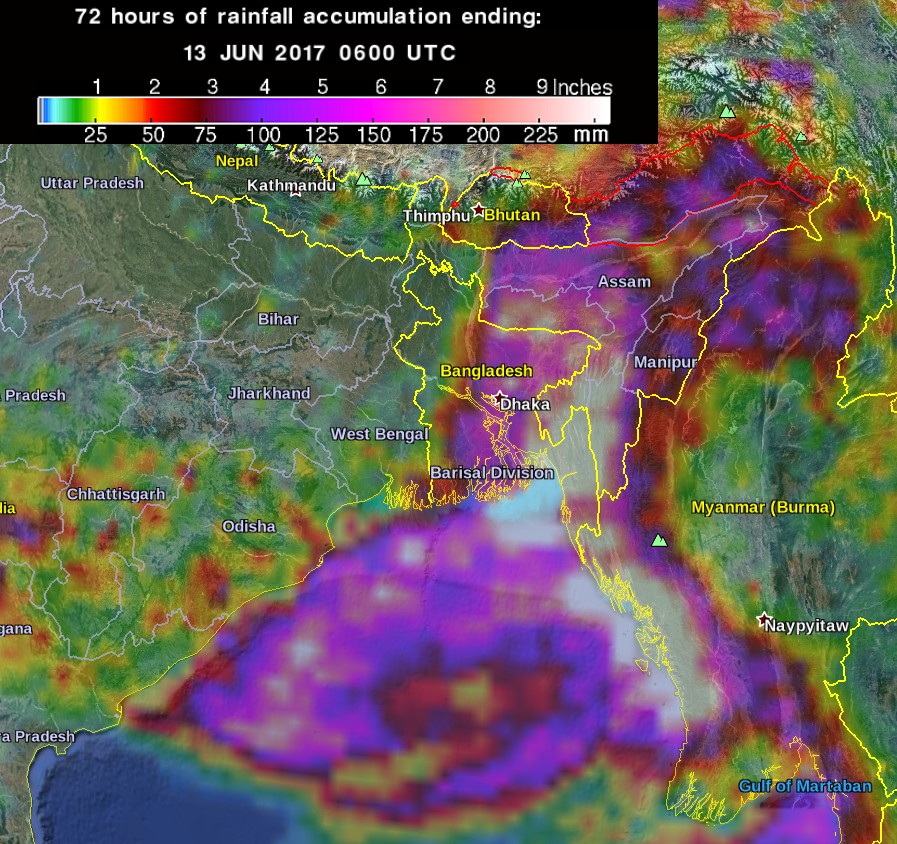 Local media report the death toll has climbed to at least 136.

In addition to mudslides, severe flooding in low lying areas have significantly damaged roads and communication infrastructure. Remote communities in Bandarban, Chittagong and Rangamati districts have been cut off and remain without water, electricity and food supplies.