​At least 20 people have died and three are still missing as severe weather hit the US Midwest and South over the weekend. Flooding rain, strong winds and tornadoes were reported in Texas, Oklahoma, Arkansas, Louisiana, Mississippi, Alabama, Kansas, Missouri, Illinois and Tennessee. The front, described as "powerhouse of an upper level system," moved northeast and turned its eyes to the Middle Atlantic and Northeast on Monday, May 1. This, however, is not the end of severe weather in the region as another in a series of low pressure systems is expected to bring a new round of heavy rainfall and potential flooding to many of the same areas that were impacted over the weekend.

The National Oceanic and Atmospheric Administration (NOAA), said there were 769 preliminary reports of severe weather from Saturday to Monday as of 03:00 UTC today. The reports include 30 reports of tornadoes from Texas to Illinois and Mississippi on Saturday and Sunday. The region also saw around 1 million lightning strikes.

At least 6 tornadoes, one of which has a preliminary intensity of EF-4 (Eustace to West Canton), struck Texas killing at least 4 people and injuring 56. Six people, including a fire chief who was struck by a vehicle while working during a storm, died in Arkansas after up to 280 mm (11 inches) of rain flooded the state. Two children are still missing in Arkansas after being swept away by floodwaters. At least four people died in Missouri and Mississippi, and one in Tennessee.

A devastating weekend of weather. Video courtesy The Weather Channel

In Oklahoma, more than 80 000 people were left without power as winds up to 100 km/h (62 mph) swept through the state on Friday and Saturday, April 28 and 29, knocking down trees and power lines. More than 40 000 people were without power in the metro area early Saturday. Oklahoma Governor declared a state of emergency on Saturday for all 77 counties.

In Mississippi, a possible tornado struck Durant Sunday morning, downing trees and power lines. State Emergency Management Agency reported a death in Holmes County. Another possible tornado damaged a home and downed trees north of Utica. In Prentiss, a man was struck by lightning but his condition is still unknown.

Missouri was hit particularly hard by severe weather as some parts of the state recorded 300 mm (1 foot) of rain. Major flooding left three people dead, forced more than 100 evacuations, and 135 rescues across the state over the weekend. Governor Eric Greitens declared a state of emergency for all of southern Missouri. More than 350 roads were closed, including a stretch of Interstate 44 near Rolla. More than 100 highways were also shut in neighboring Arkansas.

The Mississippi River was above flood stage at many points and the Cape Girardeau point of the river is expected to crest within about 15 cm (5.9 inches) of its all-time record 14.9 m (48.9 feet). Flood warnings are in effect across much of the state.

On the tail end of the system, a late season snowstorm dropped up to 50 cm (19.7 inches) of snow in western Kansas, along with winds up to 90 km/h (60 mph). The National Guard said it was called at least 40 times to rescue stranded drivers in the state. 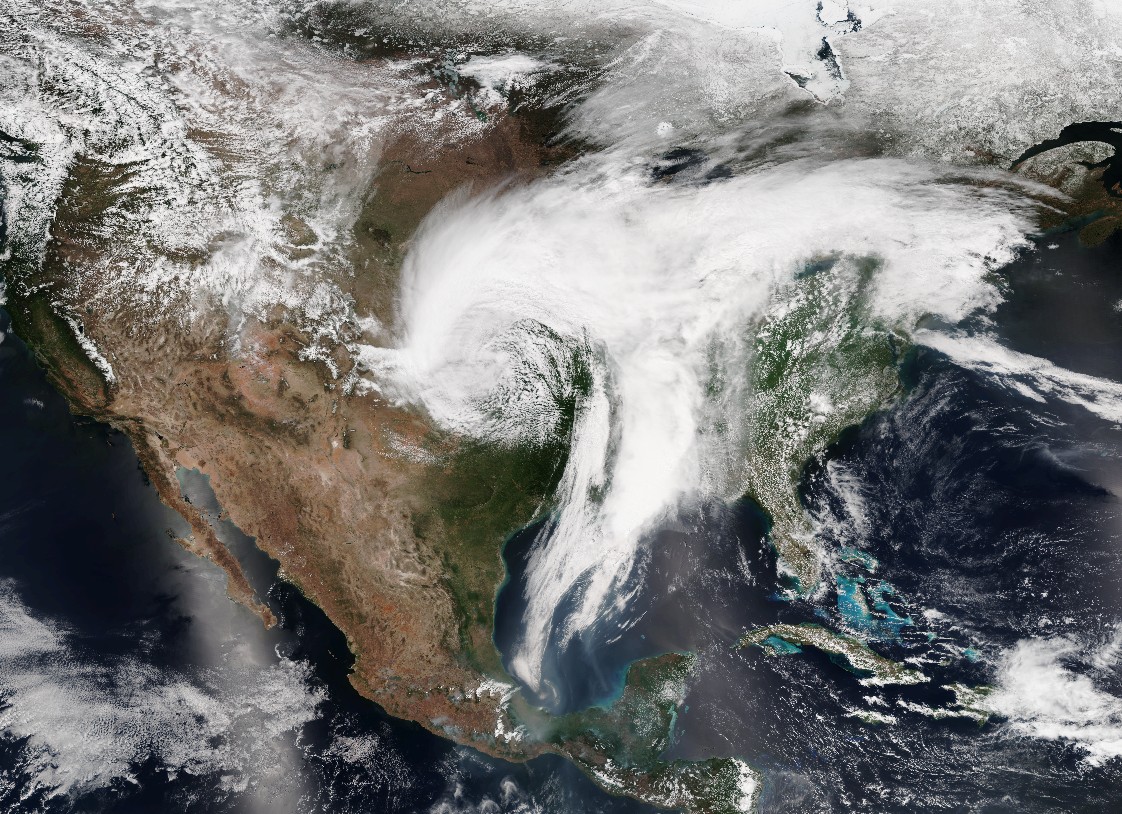 "After flooding smashed records that had stood for over 100 years, more heavy rain is headed toward the Ozarks and mid-Mississippi Valley, bringing a threat of renewed flash flooding and adding to already swollen rivers and reservoirs," weather.com senior meteorologist Jon Erdman said.

So far, nine flooding records have been broken and several more are expected in the coming days, Erdman said.

Another in a series of low pressure systems is expected to bring a new round of heavy rainfall and potential flooding for many of the same areas that were impacted over the weekend. Additional flooding of rivers, creeks, streams and low-lying areas may be possible.

A frontal system that has moved off much of the East Coast will continue to bring showers and a few thunderstorms to portions of New England today, before moving offshore tonight, NWS WPC said in their Short Range Public Discussion released 07:15 UTC (03:15 EDT) today. Locally heavy rain will be possible, especially this morning before the cold front passes through the region. Farther west, scattered showers are expected today across much of the Great Lakes as an upper-level trough passes overhead.

An upper-level trough crossing the northern Rockies early this morning is forecast to move into the central US later today. As this occurs, an area of low pressure is expected to develop along a surface frontal boundary across the southern plains later today. The developing low pressure system is forecast to move east toward the lower Mississippi valley on Wednesday, and into the Ohio valley by Thursday morning. Numerous showers and thunderstorms are expected in association with the system, starting across portions of the southern and central plains late today into tonight, and spreading east into the Mississippi and Ohio valleys on Wednesday.

These showers and storms are expected to bring additional heavy rainfall to areas where the ground is still saturated from recent heavy rains. Thus, flash flooding will be possible for some areas. Severe thunderstorms are also possible on Wednesday across portions of the western and central Gulf Coast.