A strong and shallow earthquake registered by the USGS as M6.2 hit sparsely populated Alaska – British Columbia border region at 12:31 UTC on May 1, 2017. The agency is reporting a depth of 2.2 km (1.3 miles). The quake was followed by numerous aftershocks over the next couple of hours, including M6.3.

Overall, the population in this region resides in structures that are resistant to earthquake shaking, though vulnerable structures exist. The predominant vulnerable building types are ductile reinforced concrete frame and reinforced masonry construction. 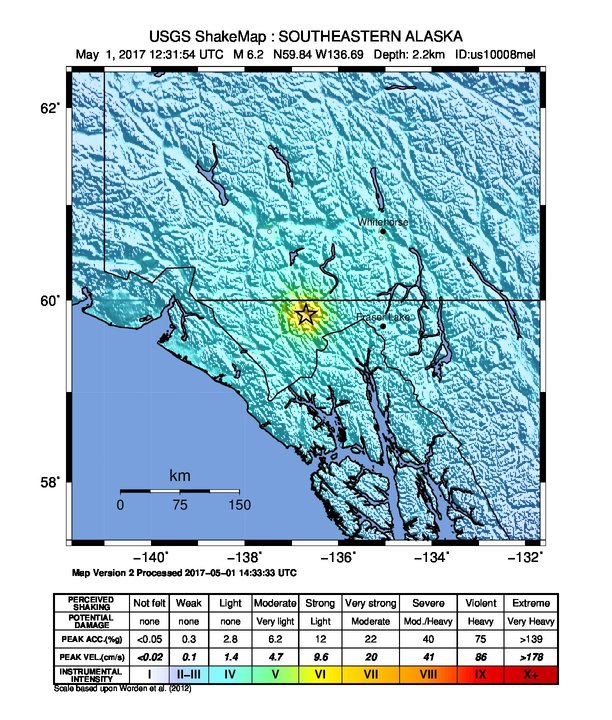 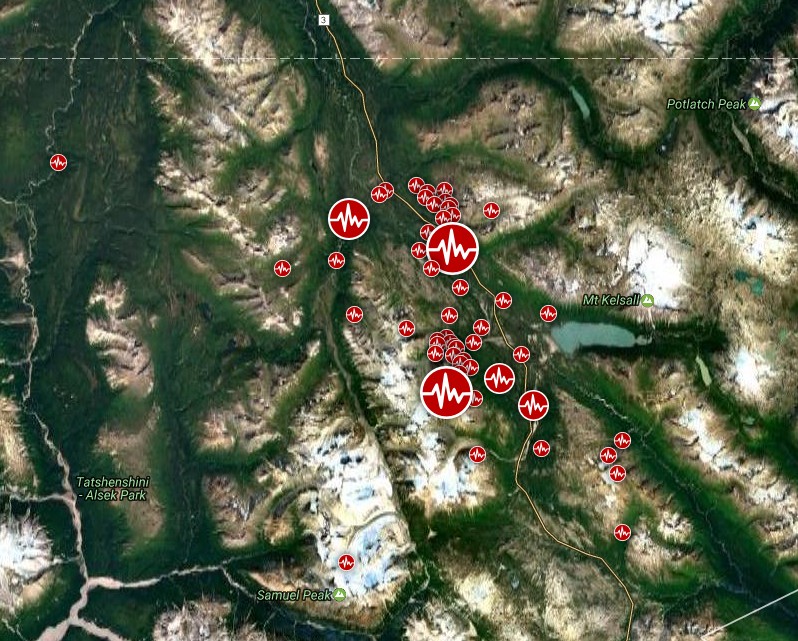 USGS geophysicist Amy Vaughan said it is not completely uncommon for an aftershock to be larger than the triggering quake, though normally the following quakes are smaller.

"The shallow initial earthquake has the potential to cause damage but the remote location dropped the chances for major problems. If people were asleep, they certainly would be jarred awake by this," she said.

There are no reports of injuries or damage. 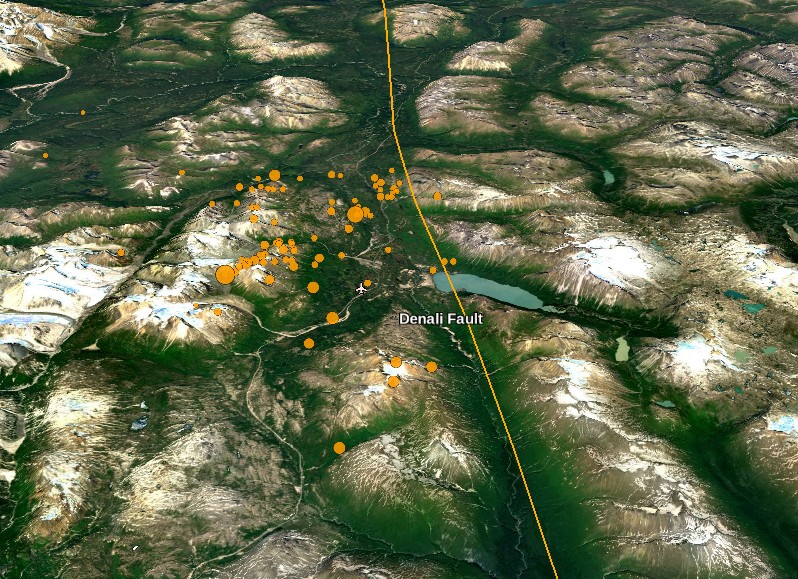 "Based on data so far, as well as the location of today’s earthquakes, the quakes were likely associated with the Denali Fault, where slip is approximately 2 mm/yr (Wesson et al., 1999). Having said that, neither of the focal mechanisms show slip parallel to the fault, suggesting these quakes occurred on secondary structures," Temblor's David Jacobson writes.

"The Denali Fault is a major right-lateral strike-slip fault that extends from northwestern British Columbia in Canada to central Alaska. Prior to 2002, the Denali Fault had been relatively inactive, averaging four M3 earthquakes per year. However, on November 3, a M7.9 earthquake ruptured a 340 km segment of both the Denali and Totschunda faults to the northwest of today’s events. To date, this is the largest earthquake in Alaska’s interior. Even though the earthquake was significant in magnitude, and similar to San Francisco’s 1906 earthquake, because most of Alaska is sparsely populated, the quake caused no fatalities and little damage."

The tectonics of the Pacific margin of North America between Vancouver Island and south-central Alaska are dominated by the northwest motion of the Pacific plate with respect to the North America plate at a velocity of approximately 50 mm/yr. In the south of this mapped region, convergence between the northern extent of the Juan de Fuca plate (also known as the Explorer microplate) and North America plate dominate. North from the Explorer, Pacific, and North America plate triple junction, Pacific:North America motion is accommodated along the ~650-km-long Queen Charlotte fault system. Offshore of Haida Gwaii and to the southwest, the obliquity of the Pacific:North America plate motion vector creates a transpressional regime, and a complex mixture of strike-slip and convergent (underthrusting) tectonics. North of the Haida Gwaii islands, plate motion is roughly parallel to the plate boundary, resulting in almost pure dextral strike-slip motion along the Queen Charlotte fault. To the north, the Queen Charlotte fault splits into multiple structures, continuing offshore of southwestern Alaska as the Fairweather fault, and branching east into the Chatham Strait and Denali faults through the interior of Alaska. The plate boundary north and west of the Fairweather fault ultimately continues as the Alaska-Aleutians subduction zone, where Pacific plate lithosphere subducts beneath the North America plate at the Aleutians Trench. The transition is complex, and involves intraplate structures such as the Transition fault. The Pacific margin offshore British Columbia is one of the most active seismic zones in North America and has hosted a number of large earthquakes historically.

At the southern extent of the mapped region offshore of Vancouver Island lies a complex triple junction between the Pacific, North America, and Juan de Fuca plates (which includes the Explorer and Winona microplates). The Winona microplate experiences little relative motion with respect to North America. Similarly, at its northern extent the Explorer microplate tracks North America plate motion, but is subducting at a rate of 2 cm/yr near its southern extent adjacent to the Nootka Fault. Farther south the main body of the oceanic Juan de Fuca plate converges with and subducts beneath the continental North America plate at a rate of 4.0–4.5 cm/yr. The Explorer microplate is heavily deformed by internal dextral faulting, experiencing frequent moderate-sized earthquakes. During the period from 1973 to 2013, this ~30-km-wide area experienced close to 50 earthquakes of M 5 or greater. The largest of these was a M 6.7 event that occurred on April 6, 1992. On January 5, 2008, M 6.6 and M 6.4 earthquakes struck in this same region just 40 minutes apart, and were separated by less than 20 km along a SE/NW trend that is sub-parallel to the motion of the Pacific plate. Like many other similar events in the region, no damage or casualties were reported for these earthquakes.

The largest earthquake observed along the Queen Charlotte fault was a M 8.0 strike-slip event in 1949, located ~25 km west of the north tip of Haida Gwaii. This earthquake created a minor far-field tsunami, an uncommon occurrence for strike-slip faulting. The 1970 M 6.8 earthquake that ruptured ~30 km south of the southern tip of Haida Gwaii was one of the first large magnitude events in the area to be recognized as having a significant thrust component. More recently the M 7.8 Haida Gwaii earthquake struck adjacent to the south-central portion of the islands on October 28, 2012, and was characterized by oblique thrust faulting, triggering a locally significant tsunami. Only four months later on January 5, 2013, a large strike-slip earthquake (M 7.5) occurred a few hundred kilometers farther north, near the junction of the Fairweather and Queen Charlotte faults. No major structural damage or casualties were reported for either of these recent events.

The Chatham Strait fault trends north-northwest from its origin at the Queen Charlotte fault and Fairweather fault junction. This structure does not appear to be accommodating a significant fraction of plate motion and has not hosted any significant historic seismic activity. Farther north the Chatham Strait fault turns northwestward, transitioning into the Denali fault, which continues through continental North America. The Denali fault had been relatively quiet historically until the 2002 earthquake sequence, when a M 6.6 event was followed 11 days later by a M 7.8 earthquake that ruptured an ~340 km section of the fault system on November 3rd of that year. Despite the large size of the November event, its remote location meant only a small amount of structural damage was observed, with no fatalities and few injuries reported. For three decades prior to the 2002 event, seismicity along the Denali fault was characterized by an average of four M = 3 events per year. However, in the eight months leading up to the mainshock, microseismicity along the Denali fault increased significantly, and 80 small events were recorded.

Near the northern termination of the Fairweather fault, the west-northwest trending Transition fault marks the boundary between the Yakutat terrane and Pacific plate. The Yakutat terrane is a 15- to 30-km-thick igneous plateau that began to subduct at a low angle beneath continental North America 30 to 35 million years ago. Though the Yakutat terrane subducts at a slightly slower rate than that of the Pacific plate, its convergence direction has a slightly more westerly trend, causing compressional deformation along the Transition fault to increase towards the northwest. Extending southward from the Transition fault, the Gulf of Alaska shear zone has experienced a high rate of seismicity historically, with earthquakes reaching M > 7.0. The Gulf of Alaska shear zone is believed to have formed along an old fracture zone or spreading fabric in the oceanic crust, and is an example of intraplate seismicity reflecting high stresses generated by nearby plate boundary processes, in this case immediately to the north , between the Yakutat terrane and Pacific plate. The Gulf of Alaska shear zone hosted a sequence of large earthquakes between 1987 and 1992, consisting of five events of M 6.8 or larger (three of which were M 7.8, M 7.9, and M 7.9).

Within the greater Queen Charlotte fault region (excluding the Alaska-Aleutians subduction zone), more than 150 earthquakes of M 5 or greater have occurred between 1973 and 2013, with only a small fraction of these events rupturing at depths greater than 25 km and none deeper than 35 km. Earthquake epicenters along the Queen Charlotte fault express an east-west asymmetry, with the majority of seismicity occurring toward the eastern slope of the marine terrace near the definition of the Queen Charlotte fault trace. This can be explained by an east-dipping fault plane, evident in moment tensor data for moderate-to-large earthquakes within the transform fault zone. (USGS)