New data covering an entire 11-year solar activity cycle suggest that Sun and planets in our solar system are surrounded by a giant, spherical system of magnetic field from the Sun, calling into question the current view of the solar magnetic fields trailing behind the Sun in the shape of a long comet tail.

Because our entire solar system moves through interstellar space, scientists thought that heliosphere – a giant bubble created by the constant outflow of magnetic solar material from the Sun – was shaped like a comet, with a rounded head and an extended tail. However, data obtained by Cassini mission and combined with measurements from two Voyager spacecraft and Interstellar Boundary Explorer (IBEX) suggest that heliosphere is rounded on both ends, making its shape almost spherical. 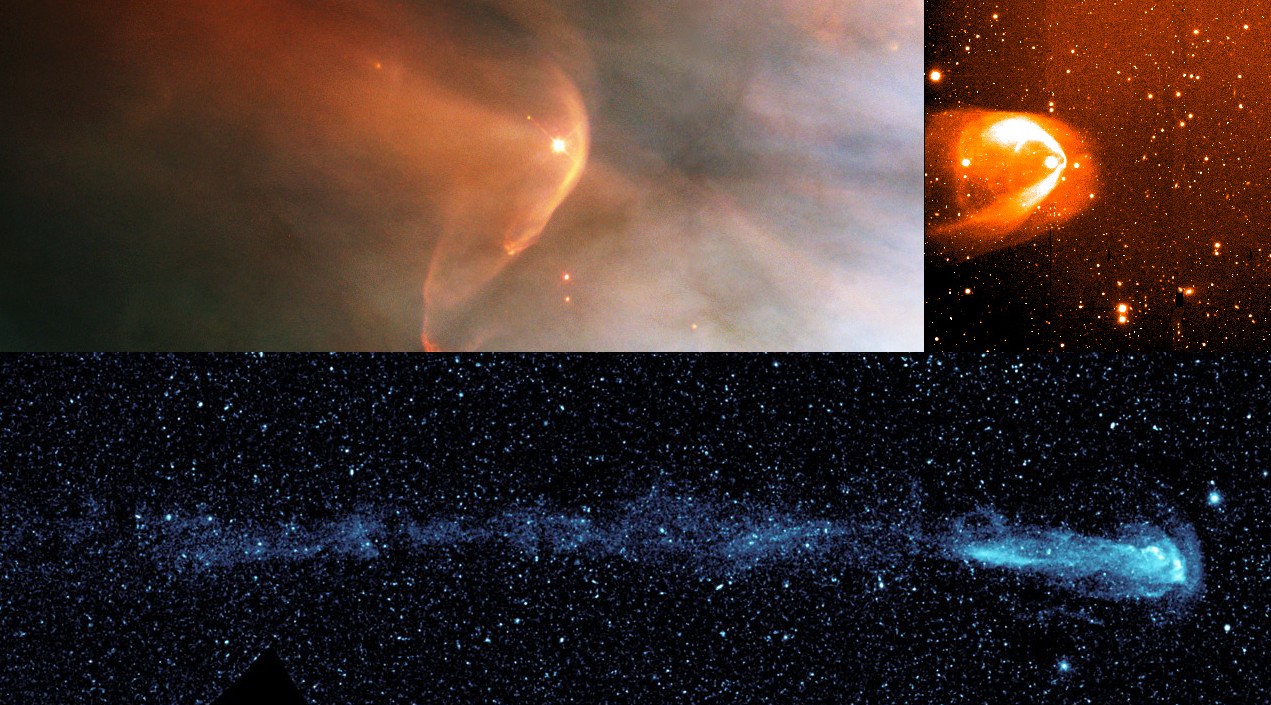 Many other stars show tails that trail behind them like a comet’s tail, supporting the idea that our solar system has one too. However, new evidence from NASA’s Cassini, Voyager and Interstellar Boundary Explorer missions suggest that the trailing end of our solar system may not be stretched out in a long tail. From top left and going counter clockwise, the stars shown are LLOrionis, BZ Cam and Mira. Credit: NASA/HST/R.Casalegno/GALEX

"Instead of a prolonged, comet-like tail, this rough bubble-shape of the heliosphere is due to the strong interstellar magnetic field — much stronger than what was anticipated in the past — combined with the fact that the ratio between particle pressure and magnetic pressure inside the heliosheath is high," said Kostas Dialynas, a space scientist at the Academy of Athens in Greece and lead author on the new study published in Nature Astronomy on April 24, 2017.

New data from NASA’s Cassini, Voyager and Interstellar Boundary Explorer missions show that the heliosphere — the bubble of the Sun’s magnetic influence that surrounds the inner solar system — may be much more compact and rounded than previously thought. The image on the left shows a compact model of the heliosphere, supported by this latest data, while the image on the right shows an alternate model with an extended tail. The main difference is the new model’s lack of a trailing, comet-like tail on one side of the heliosphere. This tail is shown in the old model in light blue. Credits: Dialynas, et al. (left); NASA (right)

An instrument on Cassini, which has been exploring the Saturn system over a decade, has given scientists crucial new clues about the shape of the heliosphere’s trailing end, often called the heliotail. When charged particles from the inner solar system reach the boundary of the heliosphere, they sometimes undergo a series of charge exchanges with neutral gas atoms from the interstellar medium, dropping and regaining electrons as they travel through this vast boundary region. Some of these particles are pinged back in toward the inner solar system as fast-moving neutral atoms, which can be measured by Cassini.

"The Cassini instrument was designed to image the ions that are trapped in the magnetosphere of Saturn," said Tom Krimigis, an instrument lead on NASA’s Voyager and Cassini missions and an author on the study. "We never thought that we would see what we’re seeing and be able to image the boundaries of the heliosphere."

Because these particles move at a small fraction of the speed of light, their journeys from the Sun to the edge of the heliosphere and back again take years. So when the number of particles coming from the Sun changes — usually as a result of its 11-year activity cycle — it takes years before that’s reflected in the amount of neutral atoms shooting back into the solar system.

"If the heliosphere’s ‘tail’ is stretched out like a comet, we’d expect that the patterns of the solar cycle would show up much later in the measured neutral atoms," said Krimigis.

But because patterns from solar activity show just as quickly in tail particles as those from the nose, that implies the tail is about the same distance from us as the nose. This means that long, comet-like tail that scientists envisioned may not exist at all — instead, the heliosphere may be nearly round and symmetrical.

A rounded heliosphere could come from a combination of factors. Data from Voyager 1 show that the interstellar magnetic field beyond the heliosphere is stronger than scientists previously thought, meaning it could interact with the solar wind at the edges of the heliosphere and compact the heliosphere’s tail.

The structure of the heliosphere plays a big role in how particles from interstellar space — called cosmic rays — reach the inner solar system, where Earth and the other planets are.

"This data that Voyager 1 and 2, Cassini and IBEX provide to the scientific community is a windfall for studying the far reaches of the solar wind," said Arik Posner, Voyager and IBEX program scientist at NASA Headquarters in Washington, D.C., who was not involved with this study. "As we continue to gather data from the edges of the heliosphere, this data will help us better understand the interstellar boundary that helps shield the Earth environment from harmful cosmic rays."