The new report from the World Bank and Global Facility for Disaster Reduction and Recovery (GFDRR) shows that up to $520 billion are lost annually due to extreme natural disasters, leaving 26 million people in poverty conditions across the globe.

According to the report 'Unbreakable: Building the Resilience of the Poor in the Face of Natural Disasters', the impacts of extreme weather-related disasters are more severe than previously assumed. In 2015 alone, economic losses from natural disaster were estimated at $92 billion, in total.

Usually, a severity of a disaster is measured by damage done to buildings, infrastructure, and agriculture. However, it is important to stress that a loss of, for example, $1 billion, is not the same when observed by the rich or the poor. A traditional approach to disaster risk is focused on the aggregate loss, which ignores the impact on the poor part of the population.

The new report, instead, focused on how natural disasters affect people's well-being which provides a perspective that takes into a fuller account the poor people's vulnerabilities.

The risk to assets depending on the hazard, exposure, and asset vulnerability. Image credit: The World Bank/UNISDR, 2015

Socioeconomic resilience measures the ability of a population to cope with asset losses. Image credit: The World Bank

For the purpose of research, 117 countries affected by natural disasters such as storms, floods or droughts have been studied. A new method for measuring the damage resulting from disasters have been utilized in the research, to factor the burden which such disasters impose on the poor.

An example of such a devastating disaster is the Cyclone "Nargis" which hit Myanmar in 2008. The storm forced half of the country's farmers to sell their assets and land to cope with its impacts which will be felt for generations to come.

In general, the poorest of the population are left more vulnerable in the face of natural disasters, as they are unable to get the required support from the governments, financial systems or even friends or family.

“Severe climate shocks threaten to roll back decades of progress against poverty. Storms, floods, and droughts have dire human and economic consequences, with poor people often paying the heaviest price. Building resilience to disasters not only makes economic sense, it is a moral imperative,” stated Jim Yong Kim, the World Bank Group President.

The study urges more climate-smart policies to be put in effect, in the light of the climate summit. Also, the reports for the first time presents the potential benefits of resilience-building interventions in the affected regions. 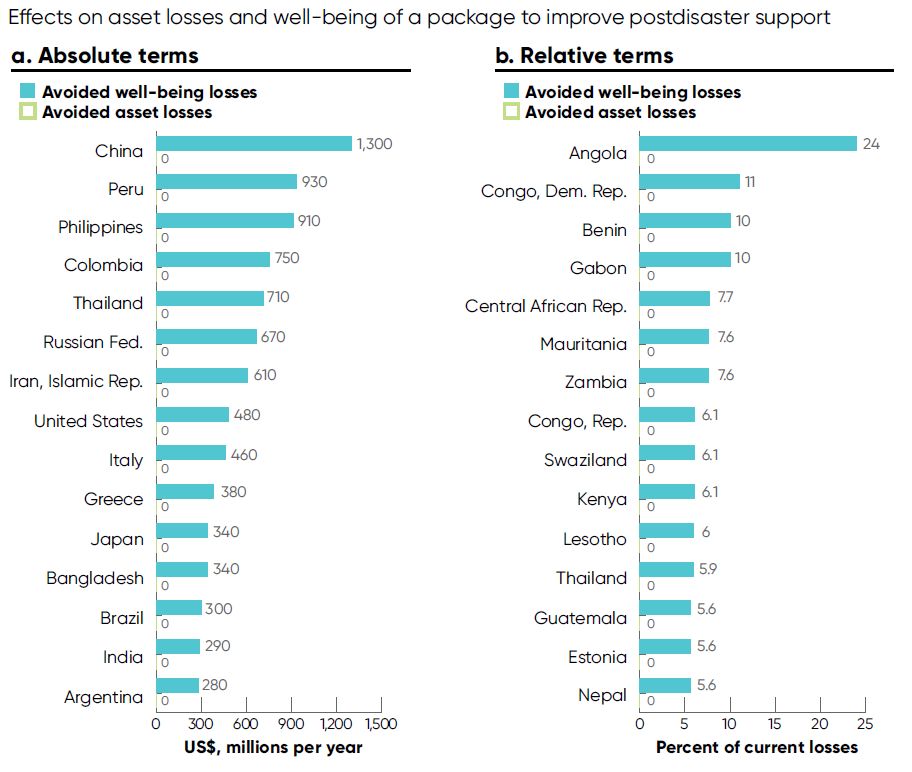 The avoided asset losses and gains in well-being from the implementation of a package that includes financial instruments to ensure that the government has access to resources after a disaster and a delivery mechanism to provide support to the affected population. Image credit: The World Bank

Such interventions could include early warning systems, improved insurances, and social protection, or access to personal banking, all of which may help the people in response and recovery from the disaster-related shocks. If incorporated, such measures could help the affected to save about $100 billion per year which would reduce the average disaster impact by 20%.

“Countries are enduring a growing number of unexpected shocks as a result of climate change. Poor people need social and financial protection from disasters that cannot be avoided. With risk policies in place that we know to be effective, we have the opportunity to prevent millions of people from falling into poverty,” explained Stephane Hallegatte, a GFDRR lead economist.

A good example of how such measures could help the affected is Kenya's social protection system and a rapid-response cash grant program in Pakistan. Before the persistent drought in 2015, the system has helped the farmers to prepare for the upcoming conditions and to minimize the drought's impacts. During the record-breaking flooding incidents in Pakistan, in 2010, the established grant program supported the recovery of 8 million people, which certainly saved many of the affected from poverty.