A group of scientists from the University of Illinois at Urbana-Champaign and the University of Adelaide in Australia have mapped Earth's outer shell using an advanced imaging technique. The technique is capable of finding weak spots and magma upwellings, which may indicate a volcanic or earthquake activity. It will help the scientists unravel why earthquakes and volcanoes occurred throughout the history and located the places where they may happen in the future.

Geologists have developed a new method for measuring the strength and locating weak spots in the Earth's outer layers, including the crust and the outer mantle, the so-called lithosphere. They used magnetotelluric imaging maps of the southwestern US to calculate lithosphere strength, a technique capable of describing the rough terrain and volcanic and seismic activity on the surface with a higher degree of accuracy than standard geologic models.

"According to plate tectonics, the standard theory of earth science, the lithosphere is supposed to be rigid. But we know that is not the case. We know that a lot of places like the western U.S. have frequent fault-slip earthquakes and very rough surface topography, and are tectonically active. In this paper, we propose a new way to describe the mechanical properties of Earth's lithosphere," said Lijun Liu, a University of Illinois geology professor. 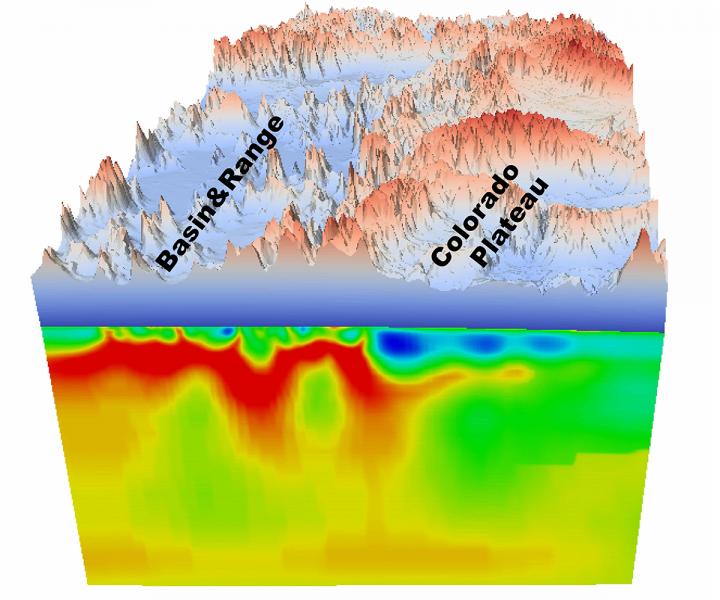 A composite image of a topographical map covering parts of Nevada and Utah and the corresponding magnetotelluric image reveals where magma upwelling and weak spots in the crust correlate to topographical features on the surface. Image credit: Lijun Liu

Magnetotelluric imaging is a high-resolution mapping technique used for surveying the lithosphere, and capable of providing important information about the electrical conductivity which can then be used to calculate the strength and its spatial distribution.

"The same factors that affect electrical conductivity — temperature, water content and the presence of molten material — also affect the viscosity or strength. The hotter, wetter or more molten, the weaker the structure," explained Liu.

According to the scientists, the models produced by the MT imaging data of the southwestern US have depicted the surface structures at scales lesser than 100 kilometers with more accuracy. This is important because features such as volcanoes and faults are local phenomena, harder to predict on the large-scale models. The used models have shown upwellings in the mantle and peaks in the topography which have been found to correlate with terrain features and active volcanoes.

According to the scientists, the analysis of lithosphere strength with the MT imaging technique can provide new insights into the dynamic Earth mechanisms and its seismic activities.

"This method will aid our understanding of the processes that cause earthquakes and volcanic activity. We'll be able to see why earthquakes and volcanoes have occurred in the past and look for places where they might potentially happen in the future," concluded Adelaide professor Derrick Hasterok.

Featured image: A composite image of a topographical map covering parts of Nevada and Utah and the corresponding magnetotelluric image reveals where magma upwelling and weak spots in the crust correlate to topographical features on the surface. Image credit: Lijun Liu