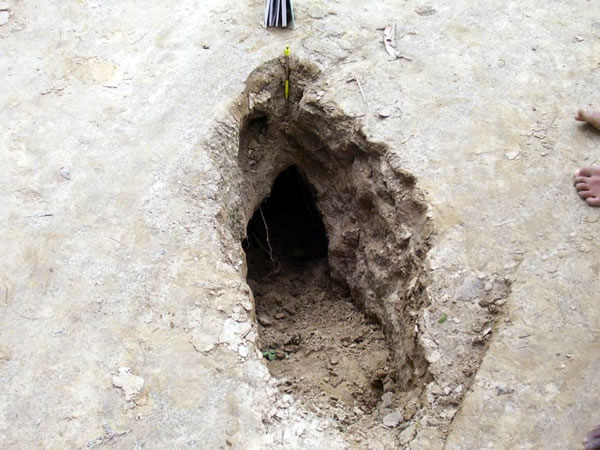 Indian scientist in the United States has cautioned that mysterious long widespread cracks observed in several places in the Indo-Gangetic plains could be due to motion of a massive granitic body underneath. Ramesh Singh, who had extensively studied the seismology in that region, said in a statement as concern mounted over cracks being formed in several districts of Uttar Pradesh.

"It is my sincere appeal to the government of India to monitor seismic activities in the area before any major disaster takes place." Ramesh Singh said."If the orientations of such long cracks are in the east-west direction, then the cracks could be due to stress on the surface of the earth due to motion of this massive craton (granitic body) which is exposed near Jhansi."

Singh, who was a senior professor at the Indian Institute of Technology Kanpur (IIT-K), is now professor at George Mason University in Washington and vice chair of GeoRisk Commission of the International Union of Geodesy and Geophysics. He said he and his colleagues at IIT-K had studied the configuration of this craton in 1990 using the magnetotelluric method.

This massive body underlying the region is inclined towards northeast with a depth reaching 300-500 m near Kanpur and 1,200 m in Lucknow.

"If this granitic craton motion is changed due to some tectonic reason, one may see subsidences at large scale and since a fault is present along Kanpur-Lucknow; there could be danger of large surface deformation," Singh cautioned.

The effect of motion of this block will be reflected in widespread cracks. Its slow deformation may also have led to seismic tremors which may not be noticed by human population. 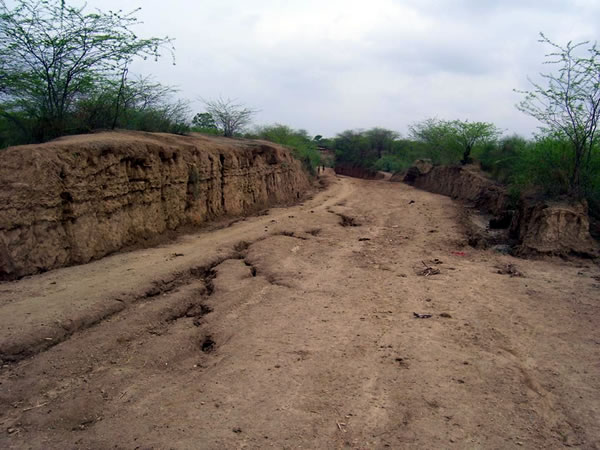 About 18 months back, scientists observed a shift in the position of the Sangam (the confluence of rivers Ganges and Yamuna and mythical Saraswati near Allahabad) and thought it was due to the sediment load in the rivers or due to plate motion.

"Now, the appearance of large widespread cracks is clear evidence of neo-tectonic activities associated with the building of stress in this region and we must monitor seismic activities along Kanpur-Lucknow and Moradabad fault lines," the professor said.

Singh said he initially suspected that the cracks might be due to subsidence as a result of excessive groundwater withdrawal. As early as in 1993, he and his student S.K. Mishra at IIT-K had predicted that cracks would develop locally when groundwater was not recharged properly or sufficiently. He said he has ruled out this explanation since the cracks are seen on a regional scale in many parts of Kanpur, Hamirpur, and Allahabad. 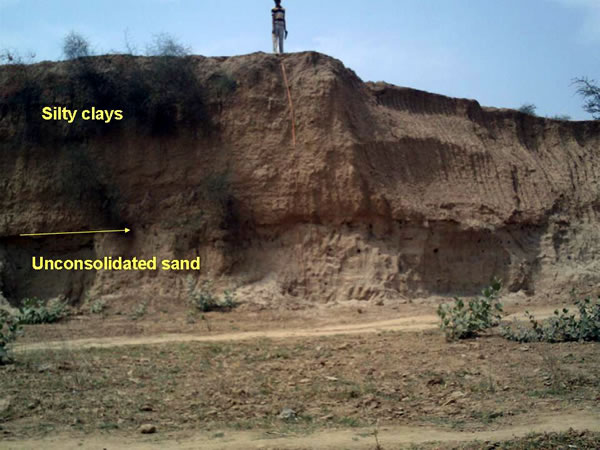 The formation of cracks on the earth continues to affect various districts of Uttar Pradesh and two villages near Lucknow are the latest to witness long fissures on the surface. Fields in Kakori block's two villages, Dullu Khera and Vader Khera, about 10 km from Lucknow, have developed wide cracks up to 250 m long. Besides the villages in Lucknow district, six districts of Uttar Pradesh have been witnessing this phenomenon for about a week.

Concerned over the incidents, Uttar Pradesh Chief Minister Mayawati convened a meeting of experts from IIT-K, Geological Survey of India (GSI), groundwater board, irrigation department and other departments on Tuesday evening to discuss the cause of the cracks. (IndiaToday)

"The phenomenon started with soil erosion. Initially, the top layer of soil got displaced following the week-long rains. And later, on Monday we noticed that the cracks widened in length as well as depth," Vinod Kumar, a gram panchayat member.

"Although a final report on the cause of the cracks is yet to be prepared, we still feel it happened because of the decline in the groundwater level," Devendra Sharma, a nodal officer at UP groundwater directorate.

He said owing to the recent monsoon showers, rainwater has percolated into the ground triggering oxidation and gaseous reactions under the earth's surface. And this has eventually led to the cracks developing in the land. Owing to the loss of groundwater, the soil at the affected sites had lost its cohesive property that tends to keep it intact. With the loss of this property, the soil is not able to bind with the water molecules. This resulted in the cracks. (IANS)

"We have heard there is an underground tunnel that leads to the historic Sahedra Mosque in Kakori. The cracks could have occurred because of it," said Sumer Gautam, a resident. 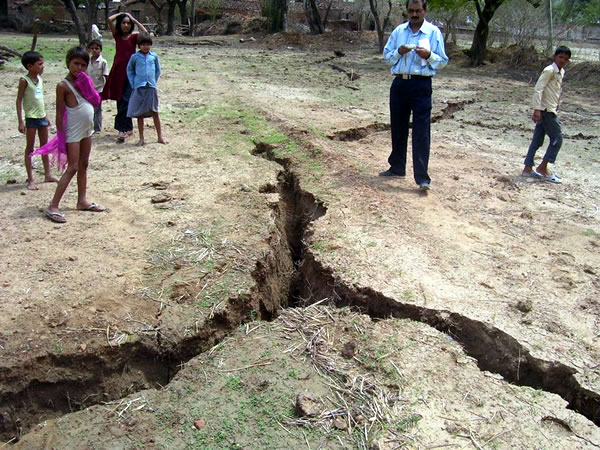 The scientists also pointed out that the areas where cracks in the earth’s crust have appeared were closer to the rivers and have sandy soil. Rampant mining of sand could also be a reason for the cracks. This theory also doesn’t satisfy because if rampant mining is one of the cause then cracks would have covered almost all parts of the India where river sand mining for construction purpose is very common. 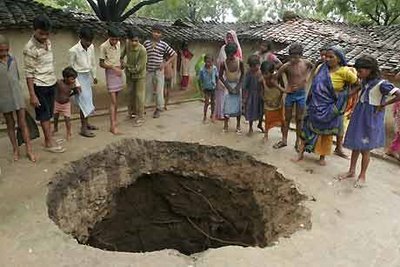 There are differences in opinions. According to US-based geologist, land breaches reported in the Indo-Gangetic belt could be due to the motion of a massive granite body underneath. Other geologists say there are two massive underground rock mountains for many kilometers along the banks of the Ganga river which are striking against each other and which might prove dangerous.

From last two years the most stable zone of Jharkhand is experiencing mild tremors in frequent interval which is not normal. We just can not jump into any conclusion by only experiencing such tremors but it is also true that something unusual is happening beneath the earth crust.

Does this fissures is something to do with movements of Indian subcontinent towards Eurasia? What ever may be the causes but it is clear that in future we are going to see more of such types of land depletion. (Sinais2012) 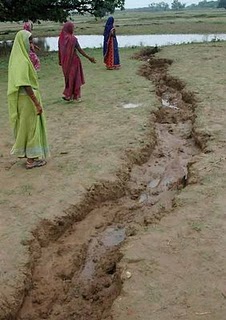 The Ganga plain which dominates the landscape and nearly covers three fourth of the geographical area of the State, lies between the rocky Himalayan belt in the north and the southern hilly tract comprised of mainly Pre-Cambrian rocks.Flexing of the Indian lithosphere in response to the compressive forces due to collision, and thrust fold loading produced the Ganga Plain foreland basin. It is filled with recent alluvial sediments which is at places more than 1,000 m. thick and an amalgam of sand, silt, clay in varying proportions.

The southern hilly tract is roughly parallel to the Ganga-Yamuna lineament. The tract is underlain by the granitic complex in Bundelkhand region and in Sonbhadra. It is overlain by rocks Mahakoshal (Bijawar) and Vindhyan Supergroup. The younger rock comprises of coal-bearing Gondwana in south Sonbhadra and basaltic rocks in southern peart of Lalitpur.

The granitic complex is considered to be potential for the search of metallic minerals like copper, lead, zinc, molybdenum, gold, nickel, Uranium and Platinum group of elements. The overlying sediments of Mahakoshal (Bijawar) and associated Iron Formation show a potential for the search of copper, uranium, and gold in Lalitpur and andalusite, sillimanite, gold, calcite, marble and clay in sonbhadra.

The lower Vindhyan sediments of Sonbhadra contain deposits of cement grade limestone, flux grade dolomits, building stone and is also potential for the search of placer gold and other metals. While the Upper Vindhyan sandstones are suitable for making decorative slab/tiles or ballast. Deposits of silica sands and bauxite are available in Allahabad and chitrakoot districts while coal deposits occur in the Gondwana rocks in southwestern corner of Sonbhadra. (Mineral.up.nic)