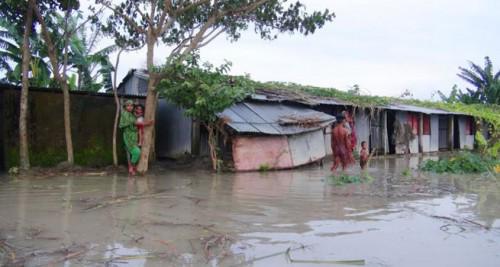 The seasonal monsoon rain showers have set off severe floods and landslides, since June 24, in Cox' Bazar, Bandarban and Chittagong, the southeastern provinces of Bangladesh. Hundreds of villages have submerged under swelling waters, over 200 000 people have been stranded, and at least 19 people died.

The persistent seasonal low which caused severe flooding in Myanmar, has also brought flash floods and landslides to Bangladesh.

On June 28, 63 mm (2.48 inches) of rainfall in a 24 hour period was measured in Cox' Bazar, 91 mm (3.58 inches) in Pachpukuria, 81.5 mm (3.2 inches) in Jessore and 62.5 mm (2.46 inches) in Teknaf, according to the government's Disaster Management Information Centre situation report. The water level status of the Chiringa river was "At and above Danger Level up to 1m", the Dohazari river status was "Below Danger Level within 50 cm", while other rivers in the country retained a normal level on the date.

Water supplies have been cutoff, and the affected population is now at risk of water-borne infections and food supply shortage. The National Society's staff and the volunteers of the Bangladesh Red Crescent Society have been providing search and rescue operations, first aid and food supplies since the floods began. The Red Crescent Societies and the International Federation of Red Cross (IFRC) are cooperating in monitoring the situation through it's local branches, weather updates from the Bangladesh Meteorological Department and reports published by the Disaster Management Information Centre.

“As the monsoon season extends up to October, the risk of more heavy rains and flooding also remains. We need to be ready with enough relief supplies locally to meet the humanitarian needs on the ground,” says David Philip John Easson, programme coordinator at the IFRC’s Bangladesh delegation.