During the last 24 hours, solar wind parameters reflected an enhanced solar wind environment due to the onset of a co-rotating interaction region (CIR) in advance of a negative polarity coronal hole high speed stream (CH HSS).  Solar wind speed increased from initial values near 350 km/s to around 600 km/s by 20:23 UTC on July 04. Wind speeds then decreased to about 500 km/s and maintained that speed by 12:30 UTC on July 5.

After 03:00 UTC on July 5, Bz didn't vary much beyond +/- 5 nT. The phi angle was in a predominately negative (towards) solar sector, consistent with the influence of the negative polarity CH HSS, SWPC said in their Forecast Discussion issued 12:30 UTC on July 5. 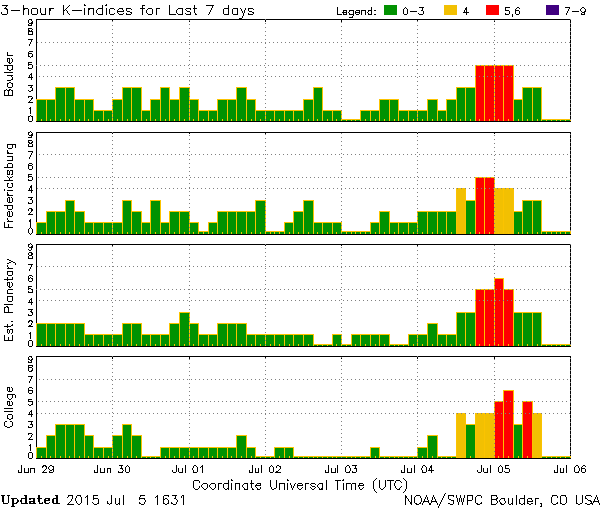 It is expected to be at unsettled to G1 (Minor) geomagnetic storm levels for the remainder of the UTC day  and unsettled to active levels on July 6 due to continued CH HSS effects.  A return to quiet to unsettled field activity is expected by July 7 as CH HSS influence subsides.