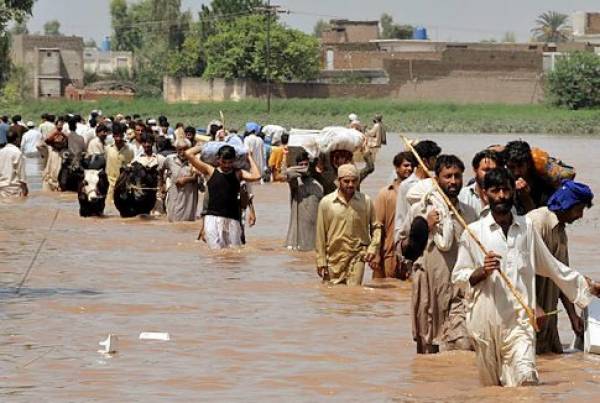 Seasonal monsoon heavy rainfall has caused severe flash floods across Pakistan, starting July 16, 2015. The authorities issued flood warnings and declared a state of emergency, as a number of villages and cities across the country were hit by the bad weather conditions. 12 people were found dead and at least 200 000 are displaced from their homes. Severe infrastructural damage was reported.

Daily Pakistan reports over 200 villages have been submerged in Rojhan and Layyah. Residents of lower areas have been urged to move to safety, as the River Indus at Kot Mithan has been reported to be in the 'high flood' state. 'Medium flood' state was declared for the river at Rajanpur and DG Khan. The Punjab Home Minister and Chairman of Cabinet Committee for Flood, Shujah Khanzada has stated the river levels are normal in Punjab, and there is no flood danger at the minute. 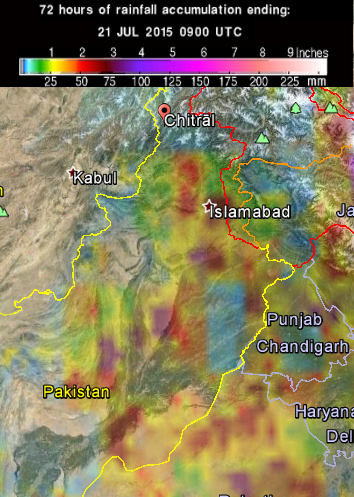 The residents in the districts of Layyah, Rajanpur and Muzaffargarh have been evacuated as 71 villages have been submerged under flood waters.

The Chitral district in northern part of Khyber-Pakhtunkhwa province has been hit the hardest. Pakistan Army and FC are carrying out rescue and relief operation in the province. Two army helicopters are active in the aid operation, at least 50 people were rescued and over 8 tons of food has so far been distributed.

National meteorological service forecasted Punjab and northern KP, eastern Balochistan and Kashmir are still expecting strong monsoon rainfall due to unstable weather conditions, and the flash flood warning remains active across the area over the next 48 hours.