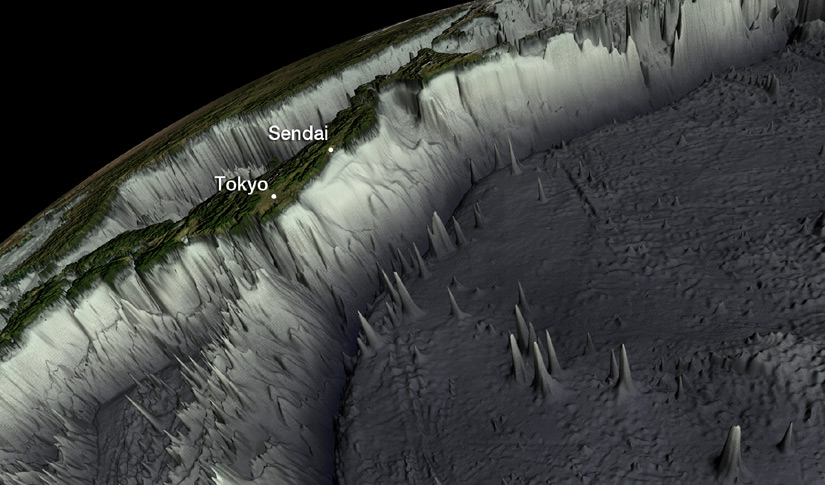 Satellite images have been essential for helping relief efforts in Japan following the massive quake that struck on 11 March. Now scientists are using ESA’s space radars to improve our understanding of tectonic events.

Scientists are calling on data from the advanced radar on ESA’s Envisat satellite to map surface deformations caused by the magnitude-9 earthquake. 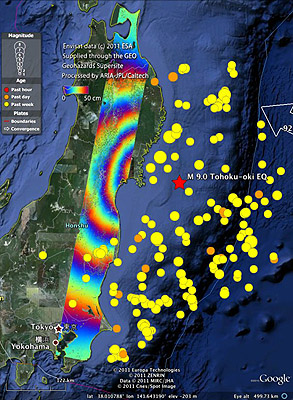 Studying data acquired on 19 February and 21 March, scientists from NASA’s Jet Propulsion Laboratory have detected a ground shift of about 2.5 m eastwards and a downward motion of Honshu Island’s east coast.

Scientists from Italy’s Istituto Nazionale di Geofisica e Vulcanologia have used the same Envisat data to show a large portion of the surface displacement, with a maximum shift of 2.5 m. These first results, covering an 800 km-long strip over Sendai and Tokyo, show movement far away from the epicentre (denoted by the red star in the top image) in the Pacific Ocean.

The complex technique being used by the scientists is known as ‘InSAR’ – synthetic aperture radar interferometry. It combines before and after radar images of the same ground location from the same position in space in such a way as to detect ground motion down to a few millimetres.

These analyses could only be made now because Envisat’s orbit repeats every 30 days. After capturing the area on 19 February –before the earthquake – Envisat’s repeat scan from the same position in space came on 21 March. Envisat is still making repeat visits to cover the full area.

Another veteran ESA satellite is also contributing to the Japan radar coverage. After 16 productive years, ERS-2 will end its mission this year, but its repeat cycle was fortuitously changed earlier this month from 35 days to 3 days to collect innovative radar information.

Its three-day repetition is providing partial coverage over Japan, north of Sendai. Collection of ERS-2 radar data over this area began after the main earthquake with the aim of mapping the aftershocks. Scientists are now working on these data.

This disaster marks the first time that multiple space agencies – ESA, the German Aerospace Center and the Japan Aerospace Exploration Agency – are openly providing SAR data for understanding tectonic processes under the GeoHazard Supersites initiative, coordinated by the Group on Earth Observations. 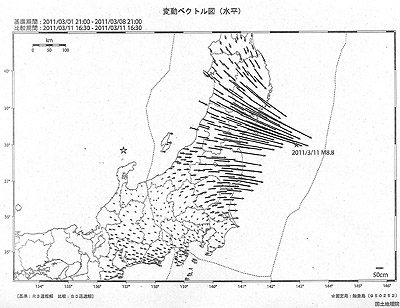 The initiative is stimulating international efforts and fostering collaboration between space agencies, in-situ data providers and users to further our understanding of geological risks.

The initiative provides scientists with access to in-situ and spaceborne data, including 20 years of satellite radar observations. 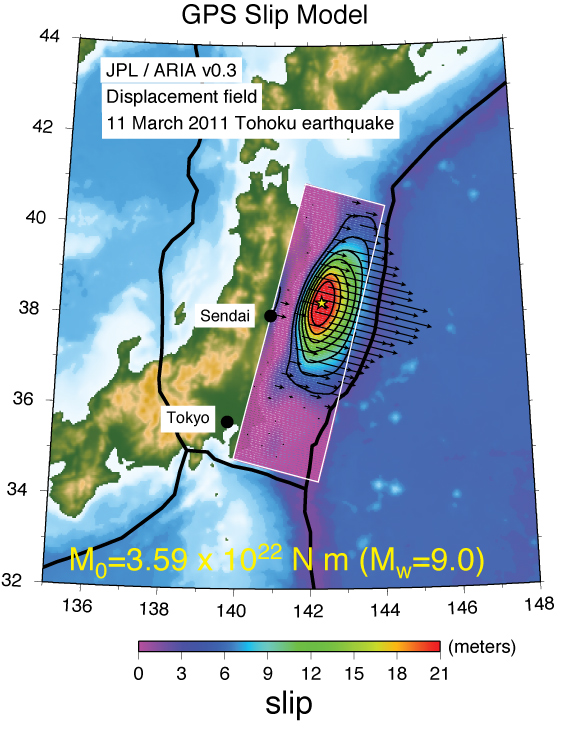 This joint collaboration, incorporating all available space and ground data, is an efficient way to make significant progress in assessing the area’s future vulnerability while reconstruction is under way.

This is a map of the terrain displacement based on Envisat Advanced Synthetic Aperture Radar of the earthquakes that struck Japan beginning on 11 March 2011. The map is derived from an interferogram generated by INGV using data acquired on 19 February and 21 March 2011 on track 347.

The map shows a large portion of the surface displacement field. The maximum displacement along the Line Of Sight (of the satellite) reaches about 2.5 m relative to a reference point within the entire frame strip located nearby the southern boundary. 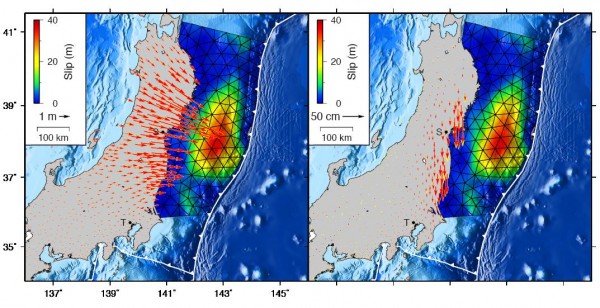