At least one person has been killed after a Category 1 Hurricane "Hermine" made landfall near Saint Marks in Florida's Big Bend area early Friday, September 2, 2016. Hermine has caused severe coastal damage and is now a tropical storm making its way through Georgia toward the Carolinas.

Although many counties in the Big Bend area had ordered mandatory evacuations ahead of the storm, not all residents heeded those orders. According to Florida Governor Rick Scott, a man was killed by a downed tree that fell onto a tent in a homeless camp in Ocala, Marion County.

About 253 000 people had lost power after the storm landed, Scott added.

Hermine made landfall at 06:00 UTC (02:00 EDT) with winds of 130 km/h (80 mph) that caused storm surges and flooded part of the coast. In the town of Cedar Key, Levy County waters rose more than 2.9 meters (9.5 feet), among the highest surges ever seen, according to the National Weather Service (NWS).

Perry Police said Taylor County Coast suffered severe damage. "Enforcement and emergency personnel will be assessing the areas as soon as possible and will allow residents to re-enter the area as soon as they are deemed safe," it said.

In Pasco County, fire and rescue personnel and sheriff’s deputies rescued 18 people from rising flood waters and got them to safety. In Hernando County, FWC officers rescued families from flooded areas.

"Today, we know there is a lot of work left to do following this storm. We will spend the coming days assessing the damage and responding to the needs of our communities and Florida families. The number one thing is to stay safe. While the storm has passed through our state, everyone must still take precautions and stay tuned to local weather stations for updates on road and weather conditions," Scott said.

At 15:00 UTC on September 2, the center of Tropical Storm "Hermine" was inland over southeastern Georgia, about 215 km (130 miles) WSW of Charleston, South Carolina and 90 km (55 miles) WSW of Savannah, Georgia. The system is moving toward the northeast near 30 km/h (18 mph) and this motion is expected to continue for the next 48 hours with a gradual reduction in forward speed expected on Saturday.

On the forecast track, the center of Hermine will move across coastal South Carolina later today (local time), move over coastal North Carolina tonight, and move offshore of the North Carolina coast on Saturday.

At the time, maximum sustained winds were near 85 km/h (50 mph) with higher gusts. Little change in strength is expected through Saturday morning. Strengthening is forecast once the center of Hermine moves offshore Saturday afternoon.

The estimated minimum central pressure based on surface observations is 989 hPa.

A Tropical Storm Warning is in effect for Nassau Sound to the south of Fenwick Island, Pamlico and Albemarle Sounds, the Chesapeake Bay from Drum Point southward, and Tidal Potomac from Cobb Island eastward.

A Tropical Storm Watch is in effect for Fenwick Island to the west of Watch Hill and southern Delaware Bay.

The combination of a storm surge and the tide will cause normally dry areas near the coast to be flooded by rising waters moving inland from the shoreline. There is the possibility of life-threatening inundation during the next 48 hours at most coastal locations between the North Carolina/Virginia border and Bridgeport, Connecticut.

The water could reach 60 to 120 cm (2 to 4 feet) on the NC/VA border to Bridgeport, Connecticut if the peak surge occurs at the time of high tide.

Hermine is expected to produce storm total rainfall accumulations of 127 to 254 mm (5 to 10 inches) with possible isolated maximum amounts of 381 mm (15 inches) over the southeastern United States and portions of the mid-Atlantic from southern and eastern Georgia into South Carolina, eastern North Carolina, southeast Virginia, and the lower Eastern Shore of Virginia and Maryland.

These rains may cause life-threatening floods and flash floods. Inflow bands south of Hermine are expected to bring an additional 25.4 to 76.2 mm (1 to 3 inches) of rainfall across portions of central and northern Florida through today. Heavy rainfall could reach the coastal areas of Delaware and New Jersey beginning Saturday night.

A few tornadoes are possible across coastal portions of North and South Carolina today, NWS said. 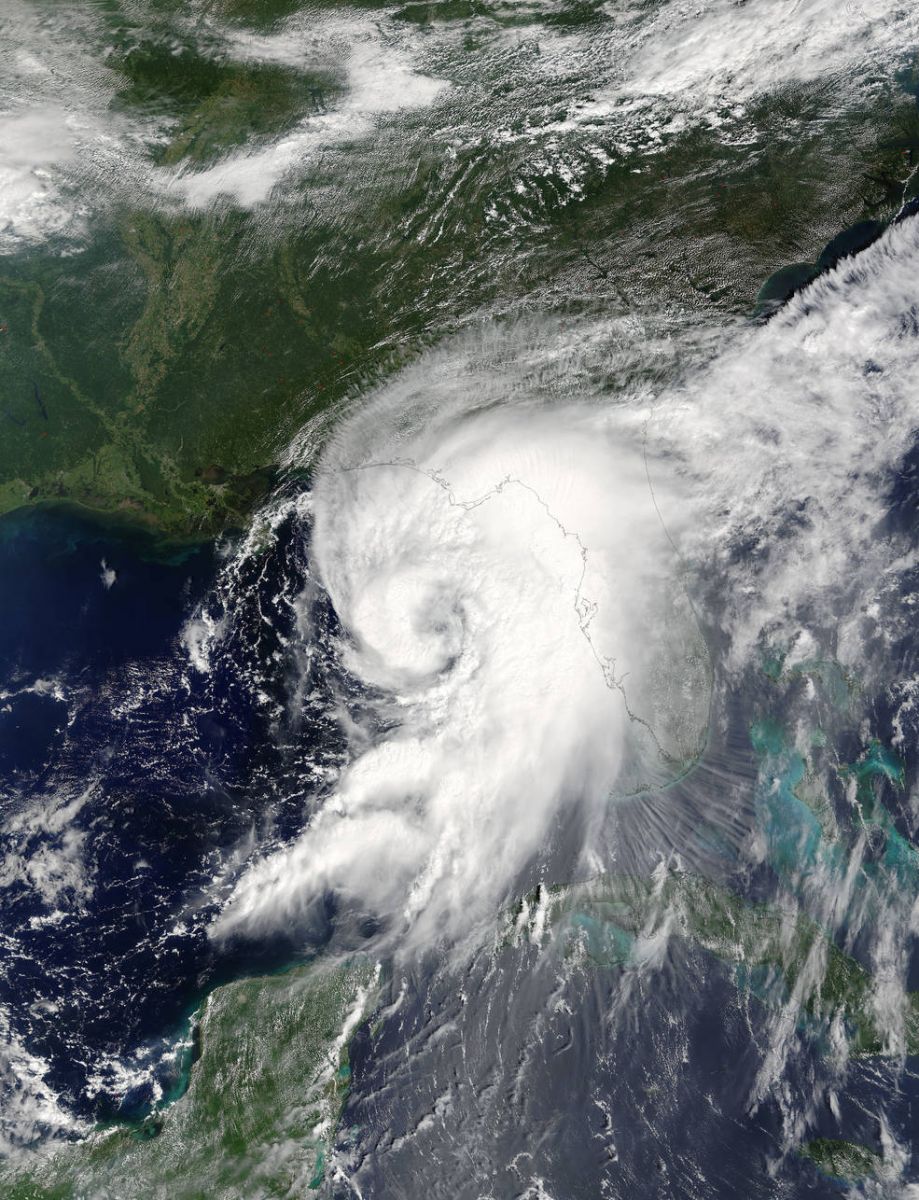 Hermine at 16:25 UTC on September 1, 2016, as it was strengthening into a hurricane. Credit: NASA Terra/MODIS