JMA's forecast track published 10:00 UTC today, takes Namtheun between Nakono-shima, Kuchino-shima and Yaku-shima around 09:00 UTC on September 3. By 06:00 UTC on September 4, Namtheun should be near or over the southern tip of Shimo-koshiki-shima, with maximum wind speed near the center of 129 km/h (80.5 mph) and gusts to 185 km/h (115 mph), heading toward Izumi, Nagasaki and Kumamoto, Kyushu, Japan. The typhoon is expected to exit into the Sea of Japan in Shimane Prefecture, near Izumo and Matsue, around 06:00 UTC on September 5.

Namtheun is bringing typhoon strength winds and very heavy rain to the region still recovering from a shallow M7.3 earthquake of April 15, 2016. More than 1 000 aftershocks and numerous landslides were registered after this powerful earthquake. 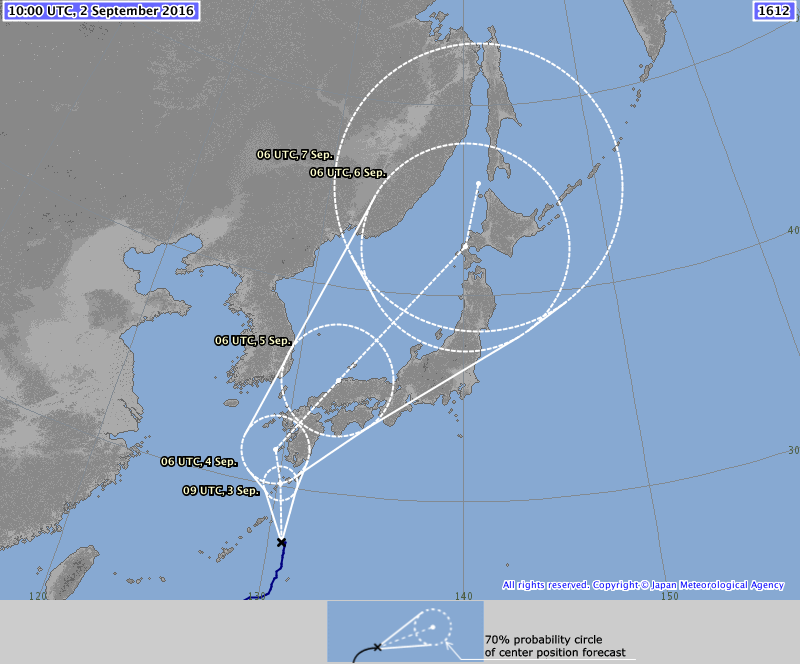 "This is a small and compact typhoon, so its winds will not extend far beyond its center," AccuWeather Meteorologist Adam Douty said.

Residents should prepare for widespread tree damage, power outages, and some structural damage. Southern and western coastal communities of Kyushu may also face an inundating storm surge of 1 – 2 meters (3 – 6 feet), as per AccuWeather's forecast.

The typhoon will bring a more widespread risk of flooding as it interacts with a dip in the jet stream. It will cause heavy rain to stream into South Korea, near the border of North Korea and into Russia's Maritime territory late this week into this weekend.

The greatest concern for flooding and mudslides will lie in Kyushu and southeastern South Korea, where rain amounts will average 100 – 200 mm (4 – 8 inches).