NASA's Marshall Space Flight Center began testing Heliopause Electrostatic Rapid Transit System (HERTS) E-Sail, a concept for a potentially revolutionary propulsion system that could send spacecraft to the edge of our solar system, the heliopause, faster than ever before. This propellant-less propulsion system would harness protons and electrons released into the solar wind to travel into interstellar space.

Extending outward from the center of the spacecraft, 10 to 20 electrically charged, bare aluminum wires would produce a large, circular E-Sail that would electrostatically repel the fast moving protons of the solar wind. The momentum exchange produced as the protons are repelled by the positively charged wires would create the spacecraft’s thrust.

Each tether is extremely thin, only 1 millimeter, and very long, nearly 20 km (12.5 miles). As the spacecraft slowly rotates at one revolution per hour, centrifugal forces will stretch the tethers into position.

The testing, which is taking place in the High Intensity Solar Environment Test system, is designed to examine the rate of proton and electron collisions with a positively charged wire.

Within a controlled plasma chamber simulating plasma in a space, the team is using a stainless steel wire as an analog for the lightweight aluminum wire. Though denser than aluminum, stainless steel’s non-corrosive properties will mimic that of aluminum in space and allow more testing with no degradation.

Engineers are measuring deflections of protons from the energized charged wire within the chamber to improve modeling data that will be scaled up and applied to future development of E-Sail technology. The tests are also measuring the amount of electrons attracted to the wire. This information will be used to develop the specifications for the required electron gun, or an electron emitter, that will expel excess electrons from the spacecraft to maintain the wire’s positive voltage bias, which is critical to its operation as a propulsion system. 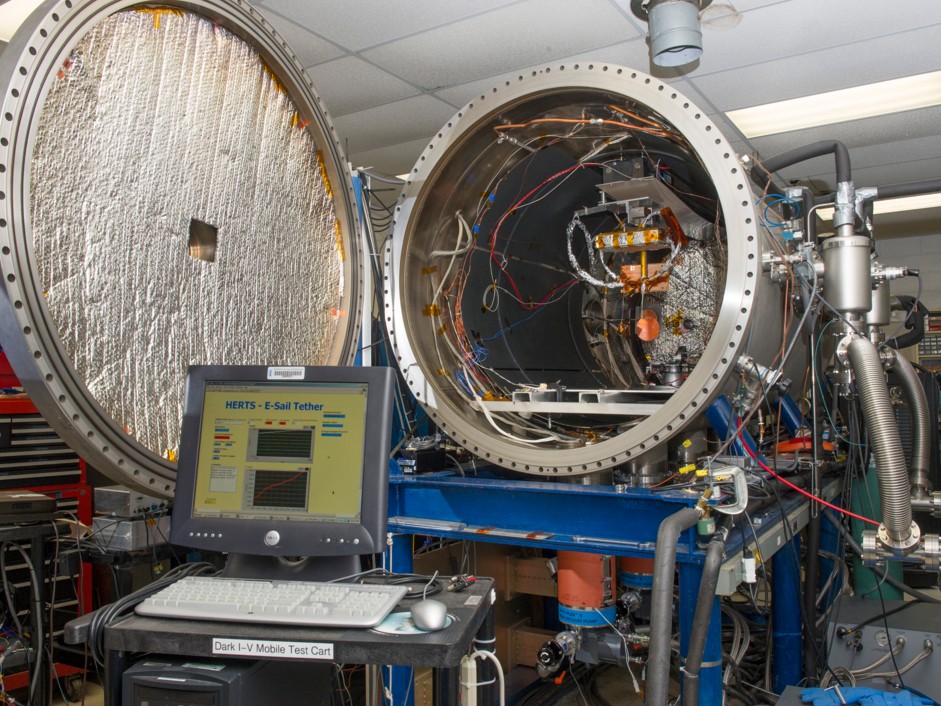 Within a controlled plasma chamber – the High Intensity Solar Environment Test system – tests will examine the rate of proton and electron collisions with a positively charged tether. Results will help improve modeling data that will be applied to future development of E-Sail technology concept. Credit: NASA/MSFC/Emmett Given

This concept builds upon the electric sail invention of Dr. Pekka Janhunen of the Finnish Meteorological Institute, and the current technologies required for an E-Sail integrated propulsion system are at a low technology readiness level. If the results from plasma testing, modeling, and wire deployer investigations prove promising after the current two-year investigation, there is still a great deal of work necessary to design and build this new type of propulsion system. The earliest actual use of the technology is probably at least a decade away.

This increase in area would lead to continued acceleration much longer than comparable propulsion technologies. For example, when solar sail spacecraft reach the asteroid belt at 5 AU, the energy of the solar photons dissipates and acceleration stops. Wiegmann believes the E-Sail would continue to accelerate well beyond that.

“The same concerns don’t apply to the protons in the solar wind,” said Bruce Wiegmann an engineer in Marshall’s Advanced Concepts Office and the principal investigator for the HERTS E-Sail. “With the continuous flow of protons, and the increased area, the E-Sail will continue to accelerate to 16-20 AU – at least three times farther than the solar sail. This will create much higher speeds.”

In 2012, NASA’s Voyager 1 became the first spacecraft to ever cross the heliopause and reach interstellar space. Launched in 1977, Voyager 1 took almost 35 years to make its 121 AU journey. The goal of HERTS is to develop an E-Sail that could make the same journey in less than one-third that time.