Mount Etna, volcano on the east coast of Sicily, erupted violently on December 3, 2015, and produced a high lava fountain in several kilometers long eruption column. The paroxysm was one of the most violent Etna's eruptions recorded over the last 20 years, according to experts.

The Chasm crater, often called the Central crater of Mount Etna produced a powerful eruption in the morning (local time) of December 3, following a period o progressive intensification observed during the evening of December 2, The National Institute of Geophysics and Volcanology (INGV) in Catania reported. 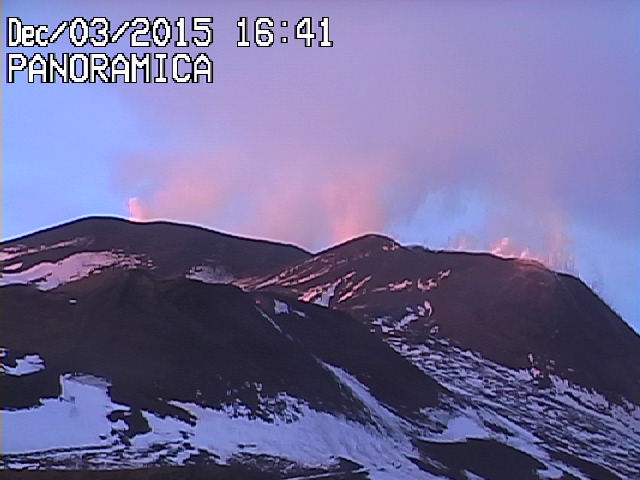 The eruption climaxed between 02:20 and 03:10 UTC when a sustained fountain of lava flow reached the heights over 1 km (3 281 feet) with a few hot jets blasting up to 3 km (9 843 feet) above the volcano crater. The pyroclastic flow traveled northeastward, carrying the ashes from the eruption as far as the villages of Linguaglossa, Francavilla di Sicilia, Milazzo, Messina and Reggio Calabria.

Eruptive activity significantly eased by dawn, however some weak ash emissions were still present in the Chasm, the Crater of the Northeast and small recently opened crater pits on the high side of the New Southeast Crater (NSEC). 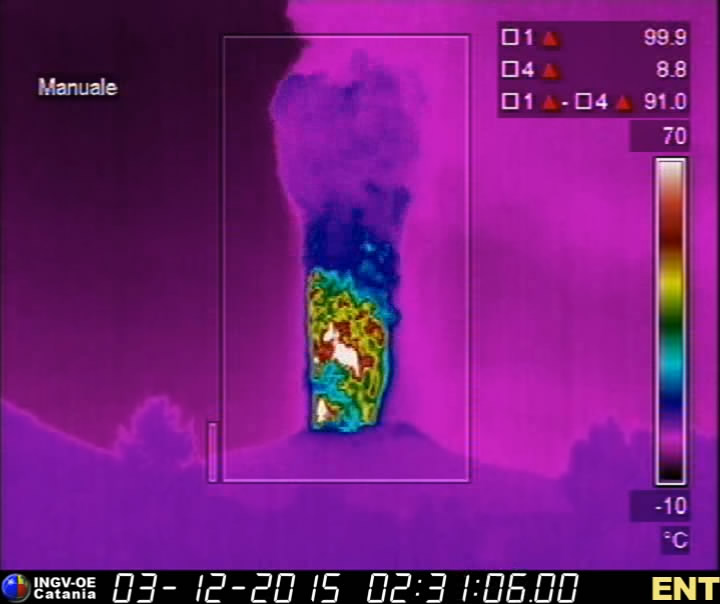 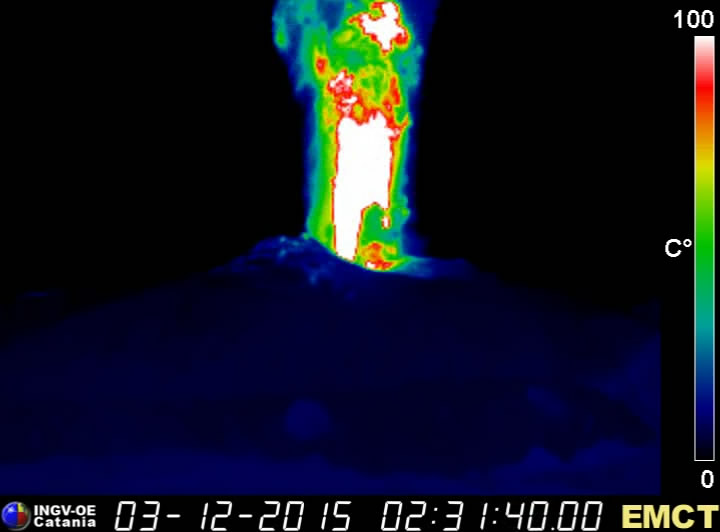 This newest eruption is among the most violent Etna eruptions recorded over the last 20 years. Two especially violent, previously recorded events, similar to this one, occurred on July 22, 1998 and September 4, 1999. During the latest, the lava fountains reached heights above 2 km (6 562 feet) from the volcano summit, while the 1998 eruption produced an eruptive column 12 km (39 370 feet) above the sea level. Both produced an abundant amount of pyroclastic material.

The Chasm crater has been known to produce extremely violent eruptions in the past, as well. Particularly powerful paroxysms were recorded in February 1947, in the period between July and August 1960 and in August 1989. 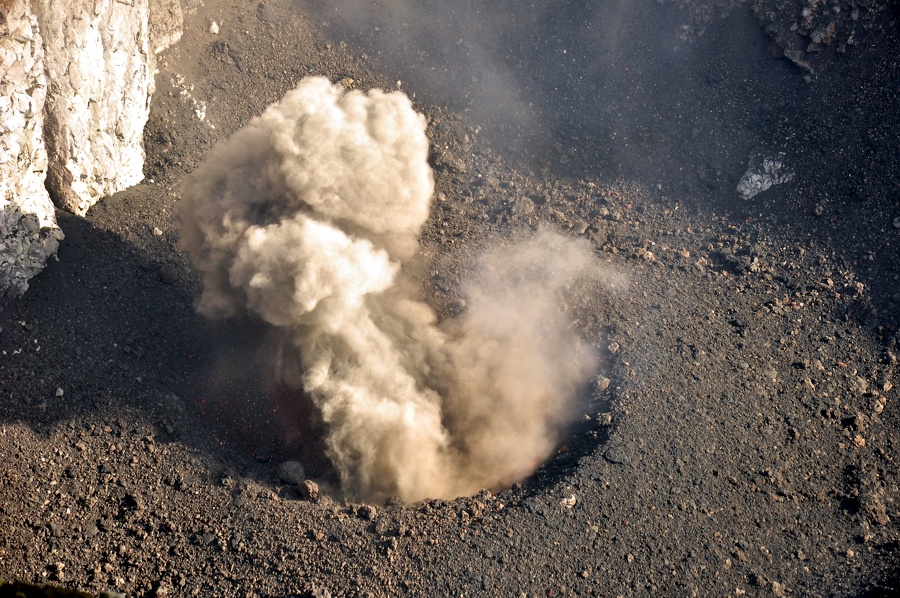 A typical explosion with the launch of incandescent bombs and a small plume of ash, view from the edge of the western Rift, November 19, 2015. Image credit: Francesco Ciancitto/INGV-Osservatorio Etneo

Since the beginning of November, the amplitude of the volcanic tremor showed a series of transitional stages, with evident increase of the signal amplitude and a shift of the source of tremor towards the surface and from a position below the center of the summit toward south-east and then south, INGV reports. Episode of high amplitude volcanic tremor on the night of November 7 to 8 was followed by the small explosion near the eastern edge of the NSEC. The activities within the Chasm showed no change during these increases in amplitude of volcanic tremor. 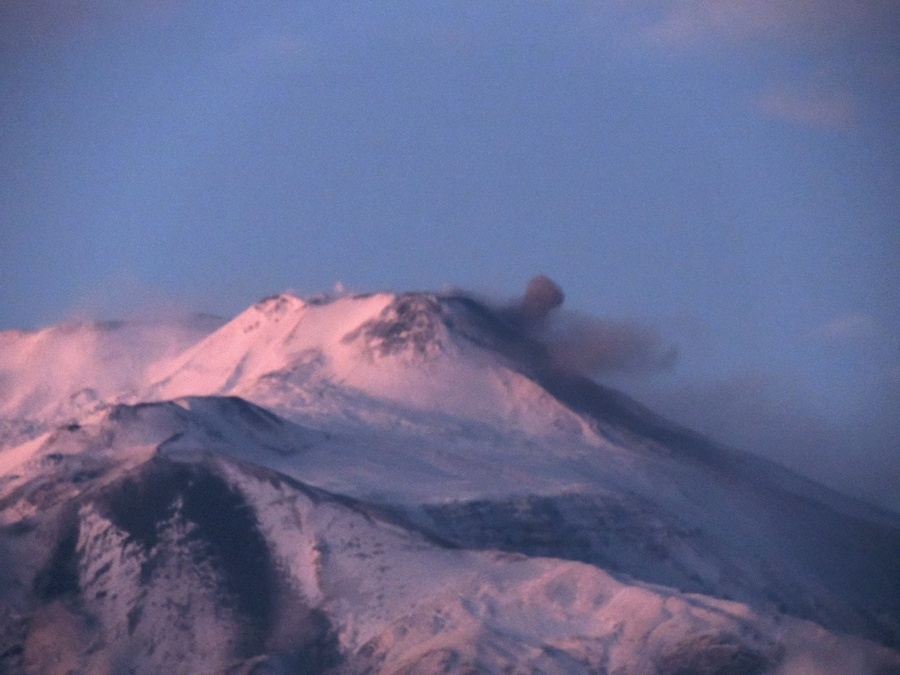 Small ash emissions on the high eastern flank of the cone of NSEC taken from Catania in the late afternoon of November 25, 2015. Image credit: Boris Behncke/INGV-Osservatorio Etneo

Another episode of high amplitude tremor took place in the period between November 20 and 22. During the night of November 24 to 25, as weak strombolian activity from the same area fumarole on the high eastern flank of the cone of NSEC was recorded. In the afternoon of November 25 small ash emissions were observed from the same point.

New small crater pits (Linguaglossa, Fiumefreddo and Giarre) on the high eastern flank of the cone of the NSEC. This is the mouth that opened during the late November Strombolian activity, located a few tens of meters below the eastern rim of the NSEC, with a diameter of about 15 to 20 m (49 to 66 feet), November 30, 2015. Image credit:Salvatore Lo Giudice, Alessandro Lo Piccolo and Turi Caggegi

Two styles of eruptive activity typically occur at Etna. Persistent explosive eruptions, sometimes with minor lava emissions, take place from one or more of the three prominent summit craters, the Central Crater, NE Crater, and SE Crater (the latter formed in 1978). Flank vents, typically with higher effusion rates, are less frequently active and originate from fissures that open progressively downward from near the summit (usually accompanied by strombolian eruptions at the upper end). Cinder cones are commonly constructed over the vents of lower-flank lava flows. Lava flows extend to the foot of the volcano on all sides and have reached the sea over a broad area on the SE flank.

A video of the violent paroxysm can be observed here.