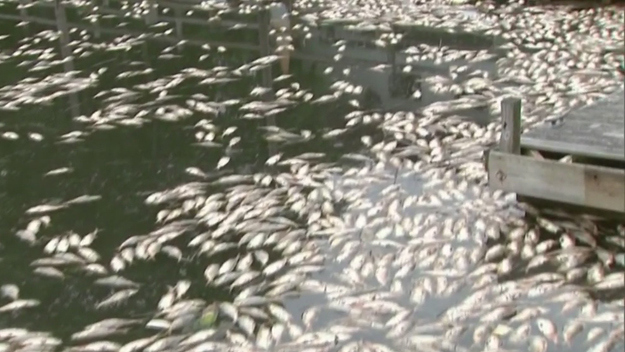 Another massive fish die-off has been spotted near the shores of Glen Cove Creek, Long Island, NY on November 30, 2015. Since this is not the first time such massive die-off was spotted near the Long Island's East End, environmentalists are calling the state to finally identify the cause.

According to Lt. Lawrence Demmler, of the Glen Cove Harbor Patrol over a hundred thousand bunker (Menhaden) fish have flounced the shore of Glen Cove Creek this year creating a lack of oxygen and opening their gills and mouths desperately trying to breathe on this small area. Plenty of them sank to the bottom while others have been floating near the shore, becoming a meal for seagulls.

This is not the first occasion where huge amounts of fish were found floating across the shore in Long Island waters. Tens of thousands of dead bait fish have been spotted in the rivers, creeks and bays of the Peconic on June 1, 2015. The main reason of massive fish die-off that time was believed to be the lack of oxygen in waters.

Fish kills are a common part of the life of the ecosystem in the area – but such massive cases are extreme. Marine life can't survive without oxygen.

“We could do more testing of the water, we could understand the science better of what’s happening and we could put into action keeping people accountable,” Adrienne Esposito, of the Citizen’s Campaign for the Environment, said.

She added that the state should target leaking shoreline septic tanks and the excessive use of pesticides and fertilizers that decrease oxygen levels. The state needs to go after tankers spilling oil in the Long Island Sound.

Winds and tides usually are a good help in such occasions and the officials hope the colder temperatures will help boost oxygen levels and prevent another massive die-off.