The hottest and most massive system of double stars that play a crucial role in the evolution of galaxies has been discovered, European Southern Observatory (ESO) announced on October 21, 2015. This very rare and strange occurrence has been observed by ESO's Very Large Telescope (VLT) and the astronomers think the two stars are racing toward the catastrophic end.

The newly discovered system of two stars, named VTFS 352 is located in the Tarantula Nebula, the most active known birth source of new stars, about 160 000 light years away. Astronomers have been amazed by the double star system, which they say is among the most extreme and strangest pairs found so far.

The animated Artist's impression of the hottest and most massive double star system found so far. Video credit: ESO/L. Calçada

Two giant stars are the largest discovered in their class of "overcontact binaries" with a combined mass of 57 times that of our Sun. They are so close that they touch each other, and are likely to be heading toward the dramatic encounter which could result in creating either a single star of enormous size or a binary black hole. 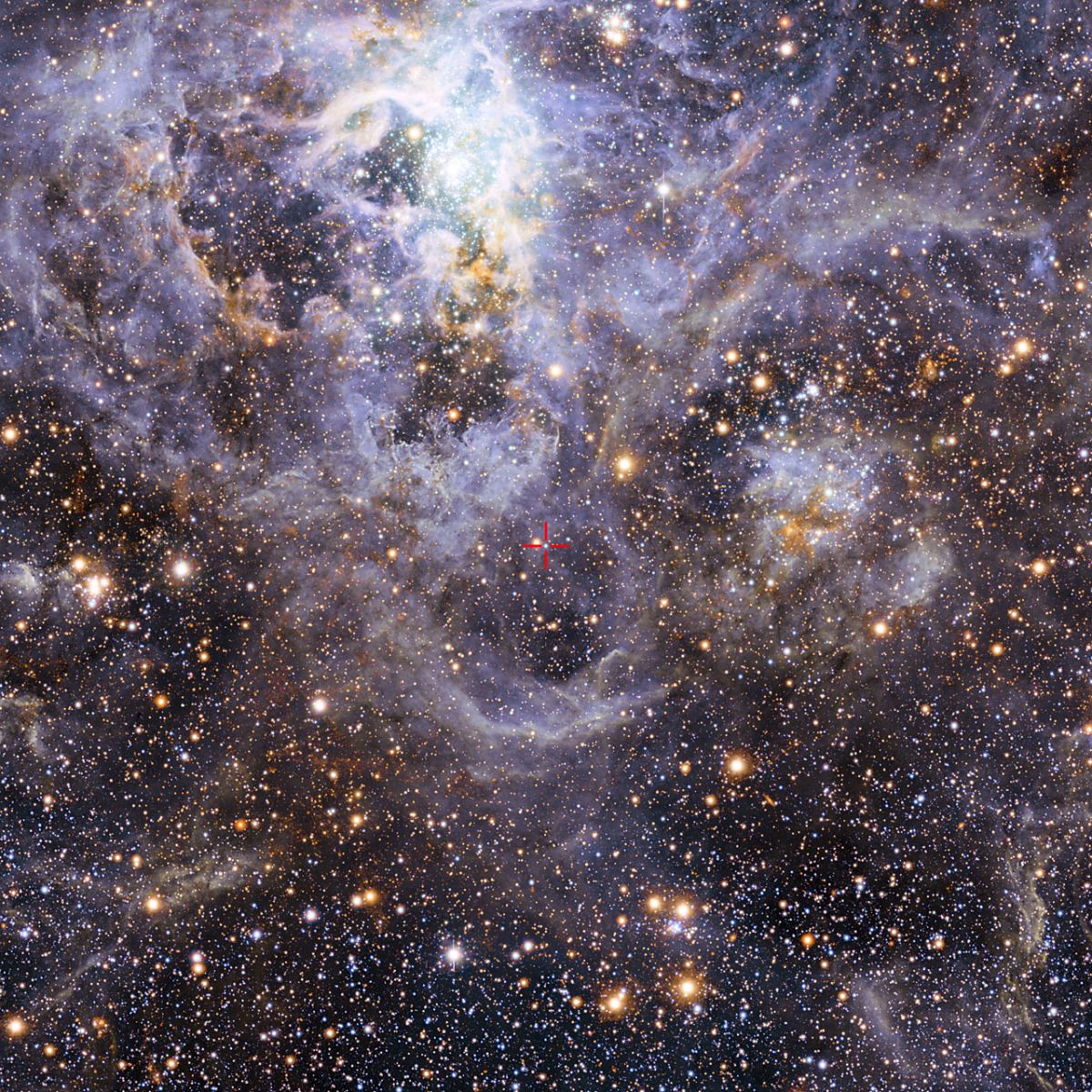 The pair orbit around each other in a period of little more than a day while their surfaces overlap and create a bridge, as their centers are only 12 million km (7.5 million miles) away. Surface temperature of each of them is estimated above 40 000 °C (72 032 °F), which makes them literally the 'hottest pair' known so far.

The type of star systems such as VFTS 352 are crucial in the evolution of galaxies and are considered to be the main producers of elements like oxygen in the universe. These systems often exhibit a "vampire star" behavior, occurring when a smaller one sucks matter from the surface of its larger companion.

The zoom sequence starts with a broad panorama of the southern night sky and closes in on the Tarantula star-forming region in the Large Magellanic Cloud. The final frames show a close-up of the region of this exotic object, in an image created from images from the Wide Field Imager at the MPG/ESO 2.2-metre telescope at La Silla. Image credit: ESO/N. Risinger (skysurvey.org)/R. Gendler

In this case, however, both stars are almost identical in size, and they're likely sharing 30% of their surface material. The scientists also think that strong tidal forces, due to their proximity, lead to enhanced mixing of their interior material.

"The VFTS 352 is the best case yet found for a hot and massive double star that may show this kind of internal mixing. As such it's a fascinating and important discovery," said Leonardo A. Almeida of the University of Sao Paolo, Brazil.

The system VFTS 352 is facing a certain catastrophe, according to the experts. The stars will end up merging, which would probably produce a rapidly rotating and possibly magnetic, gigantic single star, or forming a close binary system of black holes.

This fulldome animated artist’s impression shows VFTS 352 — the hottest and most massive double star system to date where the two components are in contact and sharing material. Video credit: ESO/L. Calçada

"If it keeps spinning rapidly it might end its life in one of the most energetic explosions in the Universe, known as a long-duration gamma-ray burst," explained the lead scientist of the project, Hugues Sana, of the University of Leuven in Belgium.

“If the stars are mixed well enough, they both remain compact and the VFTS 352 system may avoid merging. This would lead the objects down a new evolutionary path that is completely different from classic stellar evolution predictions. In the case of VFTS 352, the components would likely end their lives in supernova explosions, forming a close binary system of black holes. Such a remarkable object would be an intense source of gravitational waves," added Selma de Mink, of University of Amsterdam, the lead theoretical astrophysicist in the team.

If the system end up as a black hole binary, the discovery would be considered an observational breakthrough in the field of stellar astrophysics. However, the system is already famous for providing new insights into the evolutionary process of massive overcontact binary star systems.