Atmospheric chemists at MIT claims to have obtained the most accurate estimates of rates of coagulation between rain droplets and aerosol particles that in turn could be used to determine the extent to which natural rain may contribute to keeping the atmosphere cleaner.

The researchers used a 0.91 m (3 feet) tall glass chamber that was used to generate rain droplets in controlled rates and sizes, with aerosol particles being pumped in at the same time. The rate at which the droplets and aerosol particles attracted each other in various conditions of humidity was measured. Conditions of low relative humidity seemed to encourage coagulation. As electric charges in rain droplets played a big role in attracting particles, the researchers also altered the charge in the droplets and particles for coagulation to occur. 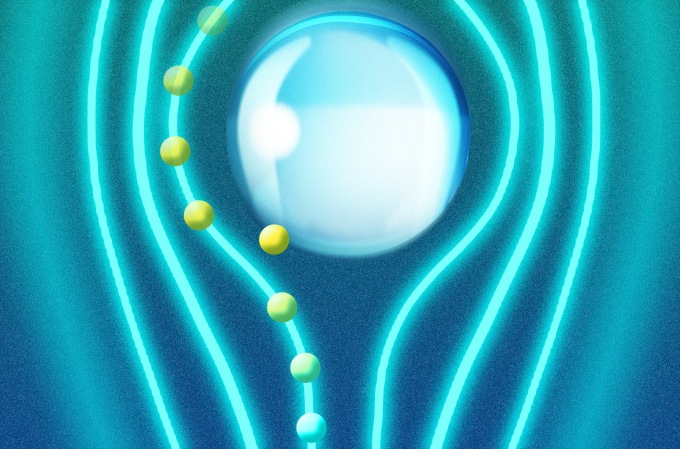 In this illustration, a falling droplet of water is surrounded by the airstream. Aerosol particles (yellow) are attracted to the droplet. The process by which droplets and aerosols attract is coagulation, a natural phenomenon that can act to clear the air of pollutants like soot, sulfates, and organic particles. Credit: Jose-Luis Olivares/MIT.

To get more accurate results, the researchers also used a different chamber with a single-droplet generator that generated single droplets of specific sizes, charges and also at fixed frequencies.  As charges carried by droplets in nature were actually lower than that imparted on droplets in the chambers by droplet generators, the researchers used a radioactive source to strip away a small amount of charge from each droplet. Various conditions of relative humidity were used during multiple similar experiments.

During the experiments, aerosol particles of known sizes were pumped in the lower portion of the chamber. As droplets hit the ground after attracting aerosol particles, they would leave salt on the surface. Otherwise, only aerosol particles were to be found. From observation of how much salt was found, the scientists were able to determine the extent of coagulation.

As clouds turn into rainfalls, and heat released by surface is trapped by clouds thereby causing greenhouse effect, Cziczo thinks it is very essential to understand the relationship between rain droplets and aerosol particles in the atmosphere. The research was funded partially by the National Oceanic and Atmospheric Administration.