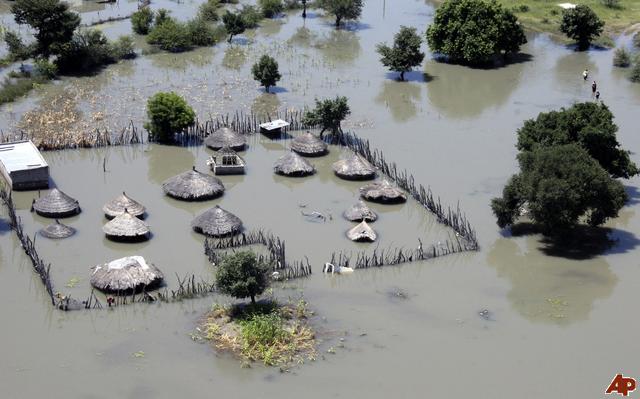 In early May 2011, more rain fell in one day in parts of Namibia and South Africa than typically falls in an entire year. For several months, unusually heavy and persistent rains have soaked western Africa and filled rivers and basins that have been quiescent for years. The latest storm moistened arid desert regions.

The map below depicts rainfall for Namibia and South Africa on May 5, 2011. The estimates were made from the Multi-satellite Precipitation Analysis, based on data from the Tropical Rainfall Measuring Mission (TRMM). Shown in shades of green and blue, rainfall estimates range from 20 millimeters (0.8 inches) to greater than 70 millimeters (2.8 inches). In much of the Namib desert near the coast, less than 20 millimeters of rain fall in a year. 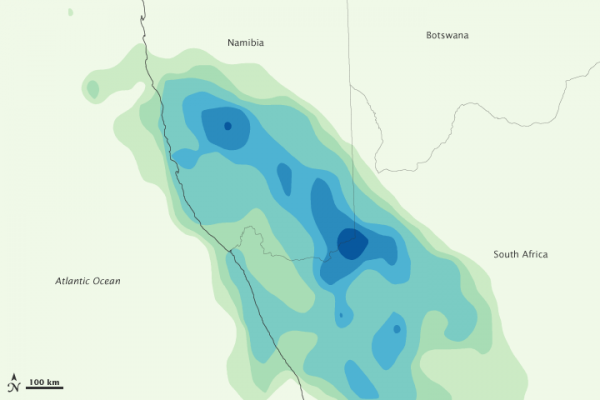 The photo depicts what is likely a “shelf cloud” associated with a high precipitation supercell thunderstorm. The clouds are pulled nearly to ground level by extremely strong downdrafts. As large amounts of rain fall, and larger and heavier rain droplets pull the air down with them. As the cold, wet air reaches the desert floor, it makes a wedge of condensed water. The curl at the bottom occurs because the down-drafting winds hit the Earth’s surface and have to spread out.

The bullseye precipitation pattern depicted in the top image occurs because these storms are short-lived and dump large amounts of rain very quickly in one area.

Since February, rainfall has been above average in many parts of sub-Saharan African—in Angola, northern Namibia, southern Tanzania, Cameroon, Congo, and Madagascar—according to the Climate Prediction Center of the U.S. National Weather Service. The Kuiseb, Boteti, and other rivers have approached record highs. (EO)