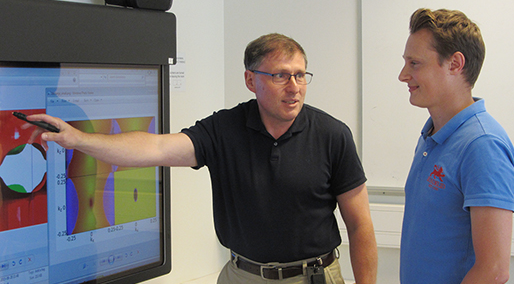 An international team of scientists has observed a previously unknown phenomena: in the conditions of extremely high pressure even the innermost electrons in the atomic nuclei of the metal osmium have interacted with each other.

It has been long known that the propertied of material change with pressure. As the pressure increases, the distance between the atoms decreases and the outer, highly mobile electrons interact with each other. Under high pressure, a conductive metal such as sodium becomes a transparent insulator, and a gas such as oxygen solidifies and starts conducting electricity.

When the osmium was exposed to this, an unexpected anomaly occurred, in the relationship between the interatomic distances: “The high pressure didn’t result in any significant change to the valence electrons, which surprised us. It made us rethink things, and go back to the theories”, explained Igor Abrikosov, professor of theoretical physics at Linköping University, and a leader of the theoretical team of the project.

Later calculations performed at the National Supercomputer Centre, NSC, in Linköping, revealed that the innermost electrons started to interact with each other as a result of being exposed to the extremely high pressure. These results present a significant breakthrough, and have been published in the highly ranked Nature journal, as such.

“Interaction between inner electrons has not previously been observed, and the phenomenon means that we can start searching for brand new states of matter,” said Prof Abrikosov. “We’re really delighted, and it’s exciting as it opens up a whole box of new questions for future research.”

​The research done is the result of the collaboration between the teams of Linköping University and scientists from Germany, US, Netherlands, France and Russia.

Sources: Linköping University, The abstract of the paper – Nature

Featured image: A research team at Linköping University, in collaboration with the scientists in Europe and US, has shown that the innermost electrons in the atomic nuclei of the metal osmium begin to interact with each other under extremely high pressure. Image credit: Linköping University.