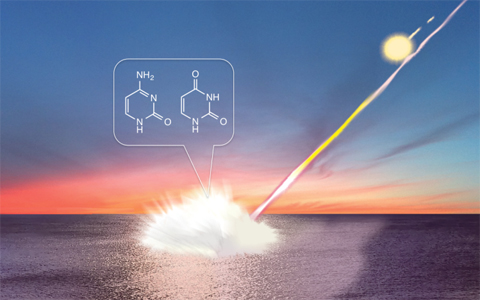 A new research conducted by the researchers from Tohoku University, National Institute for Materials Science and Hiroshima University showed that meteorite impacts on ancient ocenas may have created nucleobases and amino acids, which indicates there might have been another way the first genetic molecules on Earth have been formed.

The scientists have reached the conclusion after performing a simulation of meteorite hitting an ancient ocean. The team thourughly analysed the products recovered after impacts and discovered the formation of nucleobases and amino acids from inorganic compounds.

All genetic information of life as we know it is stored in DNA in the form of sequences of nucleobases. Formation of nucleobases from inorganic compounds that were available on prebiotic Earth were regarded as difficult.

During the first experiment in 2009, the research team reported that the simplest amino acid, glycine was formed in a simulated meteorite impact. This time, the team replaced the carbon source with bicarbonate and conducted a hypervelocity impact experiment at the speed of 1 km/s with a single stage propellant gun.

On this occassion the scientists have discovered two types of nucleobases (cytosine and uracil) found in DNA and RNA, different kinds of proteinogenic amino acids including glycine, alanine, serine and aspartic acid, non-proteinogenic amino acids and aliphatic amines. The new research was published in Earth and Planetary Science Letters, and is available online from August 16, 2015.

In 2009, this team reported the formation of the simplest amino acid, glycine, by simulating meteorite impacts. This time, they replaced the carbon source with bicarbonate and conducted hypervelocity impact experiments at 1 km/s using a single stage propellant gun.

This new result suggests there might have been another route to the formation of the first genetic molecules on Earth.

Sources: Tohoku University, The Abstract of the paper – Earth and Planetary Science Letters