Having found no potential threats on the way, NASA's New Horizons spacecraft stays course to Pluto, as it speeds closer to it's historic July 14, 2015 flyby of Pluto and it's five moons.

Launched from Cape Canaveral on January 19, 2006, New Horizons woke up from hibernation on December 6, 2014 after a 4.8 billion km voyage (3 billion miles) and almost nine years. Plans are that New Horizons will send the first-ever, close-up images and scientific observations of distant Pluto, its system of large and small moons, and the Kuiper Belt.

Note: the spacecraft experienced an anomaly during the afternoon of July 4 which led to a temporary loss of communications. See the end of the article for latest updates.

The fastest spacecraft ever launched, New Horizons has traveled more than any space mission in history to reach its primary target. Its flyby of Pluto and its system of at least five moons on July 14 will complete the initial reconnaissance of the classical Solar System. However, when New Horizons was launched in 2001, it was a mission to just Pluto and Charon. The four smaller moons were discovered later.

A hazard analysis team was formed in 2011. It happened after the dwarf planet's fourth moon Kerberos was discovered. Back then, concerns were raised that the cratering of these small moons by small debris from Kuiper Belt could spread additional hazardous debris into New Horizons’ path. Scientists modeled the likely formation and locations of rings and debris in the Pluto system.

Mission scientists have been using the Long Range Reconnaissance Imager (LORRI) aboard the spacecraft to look for potential threats, such as small moons, rings, or dust, since mid-May.The decision on whether to keep the spacecraft on it's original course or adopt a safer course by other trajectory or "SHBOT" path was dependent on the findings. The decision was made this week since the last opportunity to maneuver New Horizons onto an alternate trajectory was July 4.

After seven weeks of detailed searches for dust clouds, rings, and other potential hazards, as no potential threat was found, the New Horizons team has decided the spacecraft will remain on its original path through the Pluto system. As New Horizons is traveling at 49 600 km/h (30 800 mph), even a particle as small as a grain of rice could be a potential hazard.

These images show the difference between two sets of 48 combined 10-second exposures with New Horizons' Long Range Reconnaissance Imager (LORRI) camera, taken at 8:40 UTC and 10:25 UTC on June 26, 2015, from a range of 21.5 million kilometers (approximately 13 million miles) to Pluto. The known small moons, Nix, Hydra, Kerberos and Styx, are visible as adjacent bright and dark pairs of dots, due to their motion in the 105 minutes between the two image sets. Credit: NASA/JHU-APL/SwRI

The images that helped to decide that the mission should stay in it's current course were taken on June 22, 23 and 26. Pluto and all five of its known moons are visible in the images, but no rings, new moons, or hazards of any kind were found.

The hazards team determined that satellites as faint as about 15 times dimmer than Pluto’s faintest known moon, Styx, would have been seen if they existed beyond the orbit of Pluto’s largest and closest moon, Charon. Therefore, if any rings do exist, the hazard team determined they must be extremely faint, reflecting less than one 5-millionth of the incoming sunlight.

At closest approach, the spacecraft will fly about 12 500 km (7 750 miles) from Pluto and about 28 800 km (17 900 miles) from Charon. On the way in, the spacecraft will look for ultraviolet emissions from Pluto's atmosphere and make the best global maps of Pluto and Charon in green, blue, red, and a special wavelength that is sensitive to methane frost on the surface. It will also take spectral maps in the near-infrared, telling the science team about Pluto's and Charon's surface compositions and locations and temperatures of these materials.

During the half-hour when the spacecraft is closest to Pluto or its largest moon, it will take close-up pictures in both visible and near-infrared wavelengths. The best pictures of Pluto will depict surface features as small as 60 meters (200 feet) across.

New color images, taken on June 25 and 27, show two very different faces of the mysterious dwarf planet, one with a series of intriguing spots along the equator that are evenly spaced. Each of the spots is about 480 km (300 miles) in diameter.

"It's a real puzzle – we don't know what the spots are, and we can't wait to find out," said New Horizons principal investigator Alan Stern of the Southwest Research Institute, Boulder. "Also puzzling is the longstanding and dramatic difference in the colors and appearance of Pluto compared to its darker and grayer moon Charon."

LORRI's black-and-white images of Pluto and Charon were combined with lower-resolution color data from the Ralph instrument to produce these views. We see the planet and its largest moon in approximately true color, that is, the way they would appear if you were riding on the New Horizons spacecraft.

About half of Pluto is imaged, which means features shown near the bottom of the dwarf planet are at approximately at the equatorial line. 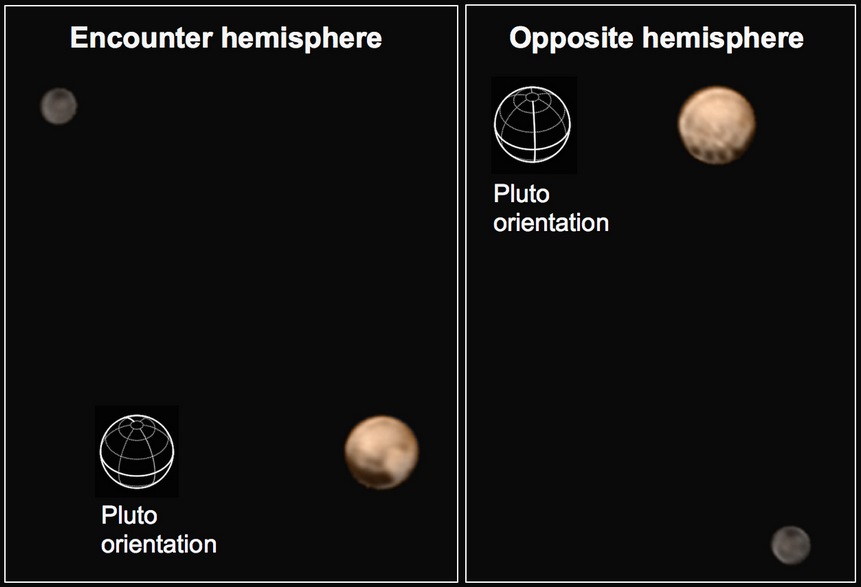 Pluto shows two remarkably different sides in these color images of the planet and its largest moon Charon taken by New Horizons on June 25 and June 27. The images were made from black-and-white images combined with lower-resolution color data. The left image shows the side of Pluto that will be seen at highest resolution when New Horizons makes its close approach on July 14. The hemisphere is dominated by a very dark region that extends along the equator. The right image is of the side that faces Charon; the most dramatic feature on this side of Pluto is a row of dark spots arranged along the equator. (The equator appears near the bottom of the images, as only about half of the planet is shown.) Image credit: NASA/Johns Hopkins University Applied Physics Laboratory/Southwest Research Institute

Where is New Horizons now

The New Horizons spacecraft experienced an anomaly during the UTC afternoon of July 4 that led to a loss of communication with Earth. Communication has since been reestablished and the spacecraft is healthy.

During that time the autonomous autopilot on board the spacecraft recognized a problem and – as it’s programmed to do in such a situation – switched from the main to the backup computer, JHUAPL writes.

The autopilot placed the spacecraft in “safe mode,” and commanded the backup computer to reinitiate communication with Earth. New Horizons then began to transmit telemetry to help engineers diagnose the problem.

A New Horizons Anomaly Review Board was convened at 19:00 UTC to gather information on the problem and initiate a recovery plan. The team is now working to return New Horizons to its original flight plan. Due to the 9-hour, round trip communication delay that results from operating a spacecraft, full recovery is expected to take from one to several days; New Horizons will be temporarily unable to collect science data during that time.

Status updates will be issued as new information is available.