After a year in orbit, the three Swarm satellites have provided a first glimpse inside Earth and started to shed new light on the dynamics of the upper atmosphere – all the way from the ionosphere about 100 km above, through to the outer reaches of our protective magnetic shield, ESA reports today.

A series of scientific papers published recently in Geophysical Research Letters and collected in this special issue, confirms the remarkable potential of this unique mission.

“These results show that all the meticulous effort that went into making Swarm the best-ever spaceborne magnetometry mission is certainly paying off,” Rune Floberghagen, ESA’s Swarm Mission Manager, said.

Swarm is tasked with measuring and untangling the different magnetic signals that stem from Earth’s core, mantle, crust, oceans, ionosphere and magnetosphere – an undertaking that will take at least four years to complete.

The Swarm mission will provide insight into many natural processes, from those occurring deep inside the planet through to weather in space caused by solar activity. In turn, this information will yield a better understanding of why the magnetic field is weakening.

ESA’s Swarm mission is set to unravel the mysteries of Earth’s magnetic field. As well as the advanced technology the satellites carry, the carefully selected orbits are essential to the success of this novel mission. At the start of life in orbit, the three satellites are relatively close to each other. Two orbit almost side-by-side at the same altitude – initially at about 460 km, but descending to around 300 km over the life of the mission. The lower the satellites are, the more sensitive they are for measuring small magnetic features in the crust. The third satellite remains in a higher orbit, initially at 510 km, and at a slightly different inclination. The satellites’ orbits drift, resulting in the upper satellite crossing the path of the lower two at an angle of 90° in the third year of operations. These drifting orbits mean that all the magnetic signals originating from Earth and those caused by the Sun are captured. Copyright: ESA/ATG medialab.

The three Swarm satellites are identical, but to optimise sampling in space and time their orbits are different and change over the course of the mission’s life – a key aspect of the mission.

They also make it much easier to monitor the changes that occur in the main field produced in the Earth’s core, which protects us from harmful charged cosmic particles. 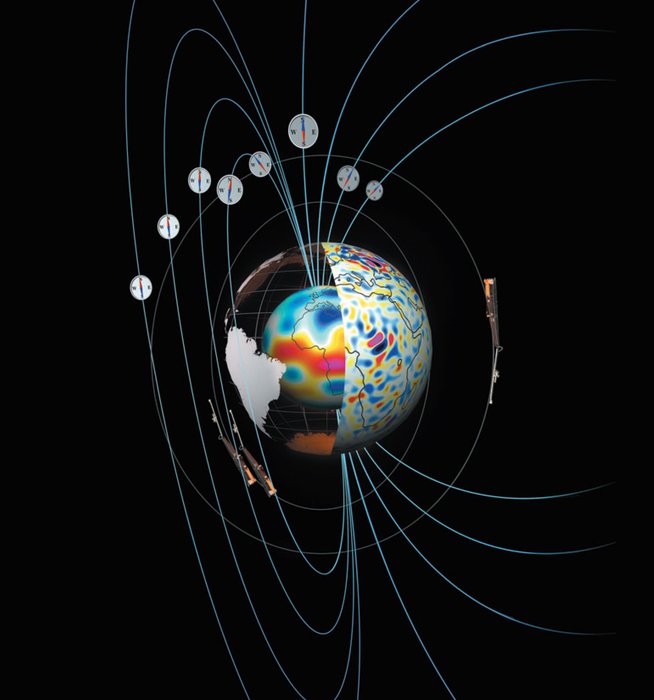 The image highlights the new crust (right) and core (centre) magnetic field models from Swarm. These preliminary results are based only on the first year of data. Image copyright: ESA/DTU Space/ATG medialab.

One of the three lead proposers of the Swarm mission, Gauthier Hulot from IPG Paris, added, “Our magnetic field is largely generated by Earth’s outer core. The constellation provides detail on the way the field is changing and thereby weakening our protective shield. This is what will ultimately make it possible to predict the way this field will evolve over the next decades.”

Very early on in the mission, when the three satellites were orbiting much closer together, first like pearls-on-a-string and later side-by-side, with one satellite progressively reaching a slightly higher orbit and separating from the lower pair, much advantage could be taken of the GPS receivers, thermal-ion imagers and Langmuir probes, which complement the magnetometers on each satellite.

Consequently, most of the early results focus on signals produced by the very dynamic electric currents near Earth.

This sheds new light onto the behaviour of the many currents flowing within the ionosphere and along the connections to the magnetosphere.

It is also leading to a better understanding of the dynamics of small-scale structures of ionospheric plasma, the very type of phenomena related to space weather that limit GPS positioning and radio transmissions.

All this, however, is only the first in what is likely to be a long list of results. 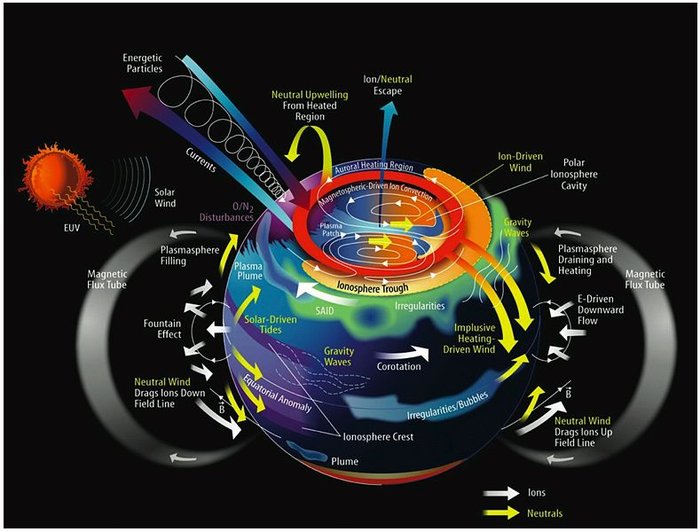 “For the time being, the priority is to make sure that the science community can take advantage of the first results of the mission,” remarks Nils Olsen, who leads the Swarm Satellite Constellation Application and Research Facility, a consortium of European, US and Canadian institutes in charge of producing advanced models of the various sources of the geomagnetic field from Swarm data.

All of these results will be presented at the 26th General Assembly of the International Union of Geodesy and Geophysics on June 22 – July 2 in Prague, Czech Republic.