A new California earthquake forecast by the USGS and partners revises scientific estimates for the chances of having large earthquakes over the next several decades.

The Third Uniform California Earthquake Rupture Forecast, or UCERF3, improves upon previous models by incorporating the latest data on the state’s complex system of active geological faults, as well as new methods for translating these data into earthquake likelihoods.

The study confirms many previous findings, sheds new light on how the future earthquakes will likely be distributed across the state and estimates how big those earthquakes might be.

Compared to the previous assessment issued in 2008, UCERF2, the estimated rate of earthquakes around magnitude 6.7, the size of the destructive 1994 Northridge earthquake, has gone down by about 30 percent. The expected frequency of such events statewide has dropped from an average of one per 4.8 years to about one per 6.3 years.

However, in the new study, the estimate for the likelihood that California will experience a magnitude 8 or larger earthquake in the next 30 years has increased from about 4.7% for UCERF2 to about 7.0% for UCERF3. 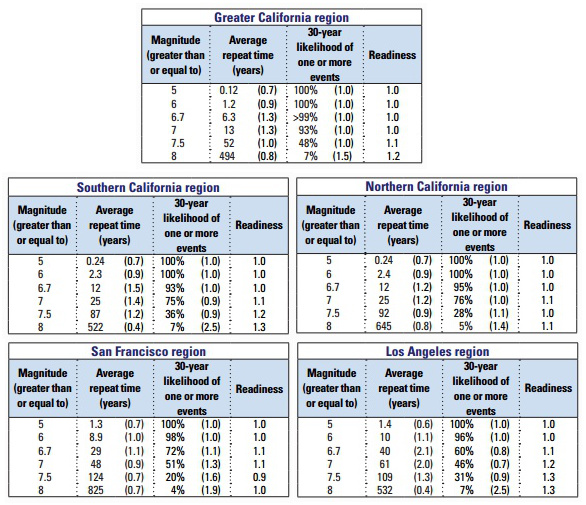 Average time between earthquakes in the various regions together with the likelihood of having one or more such earthquakes in the next 30 years (starting from 2014). Values listed in parentheses indicate the factor by which the rates and likelihoods have increased, or decreased, since the previous model (UCERF2). “Readiness” indicates the factor by which likelihoods are currently elevated, or lower, because of the length of time since the most recent large earthquakes (see text). These values include aftershocks. It is important to note that actual repeat times will exhibit a high degree of variability, and will almost never exactly equal the average listed here.

“The new likelihoods are due to the inclusion of possible multi-fault ruptures, where earthquakes are no longer confined to separate, individual faults, but can occasionally rupture multiple faults simultaneously,” said lead author and USGS scientist Ned Field. “This is a significant advancement in terms of representing a broader range of earthquakes throughout California’s complex fault system.”

Two kinds of scientific models are used to inform decisions of how to safeguard against earthquake losses: an Earthquake Rupture Forecast, which indicates where and when the Earth might slip along the state’s many faults, and a Ground Motion Prediction model, which estimates the ground shaking given one of the fault ruptures. The UCERF3 model is of the first kind, and is the latest earthquake-rupture forecast for California. It was developed and reviewed by dozens of leading scientific experts from the fields of seismology, geology, geodesy, paleoseismology, earthquake physics and earthquake engineering.

“We are fortunate that seismic activity in California has been relatively low over the past century. But we know that tectonic forces are continually tightening the springs of the San Andreas fault system, making big quakes inevitable,” said Tom Jordan, Director of the Southern California Earthquake Center and a co-author of the study. “The UCERF3 model provides our leaders and the public with improved information about what to expect, so that we can better prepare.” 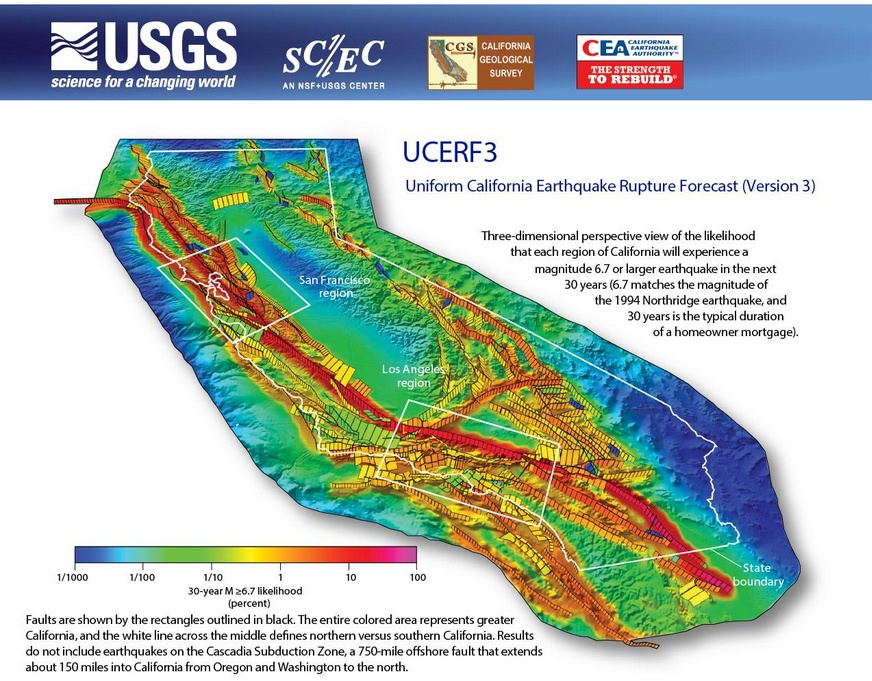