Cerro Blanco Volcanic Complex, located in the south of the Altiplano-Puna plateau, erupted around 4 200 years ago in one of the largest eruptions of the last 5 000 years in the Central Volcanic Zone of the Andes. In addition, the estimated volume of ejected ash places this eruption amongst the largest eruptions of the Holocene Era (the last 11 700 years), according to a new study published yesterday in the journal 'Estudios Geológicos.' 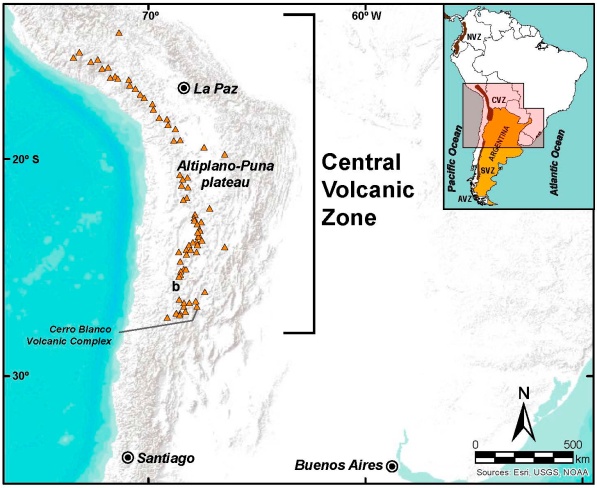 The authors of the study determined that the Cerro Blanco Volcanic Complex, located in the Argentine province of Catamarca, was the source of the large and thick volcanic ash-fall deposits that are still present today in a large area of north-western Argentina. The existence of these deposits was already known but not their origin.

Researchers studied 62 outcrops in the area and collected more than 230 ash samples during several field campaigns. In order to determine the origin of these ash deposits, the samples were analyzed and characterized by different petrological and geochemical techniques. 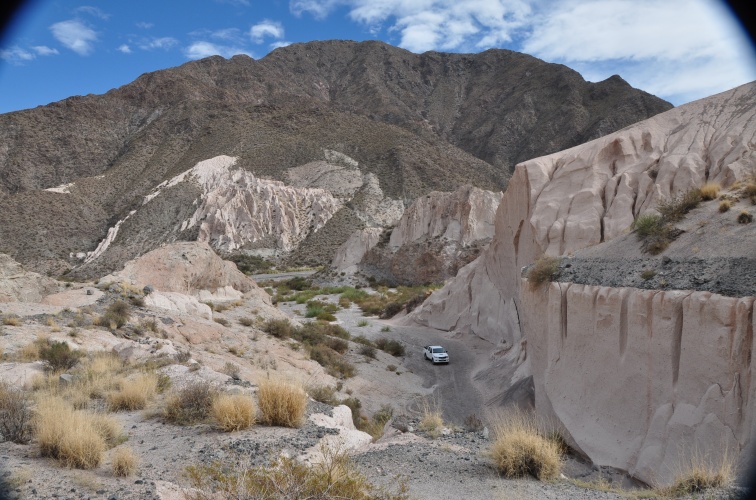 The thickness of the ignimbrite deposits originated by the pyroclastic flows of the Cerro Blanco eruption can be seen in this image taken in Las Papas, Catamarca, Argentina. Image: José Luis Fernández Turiel 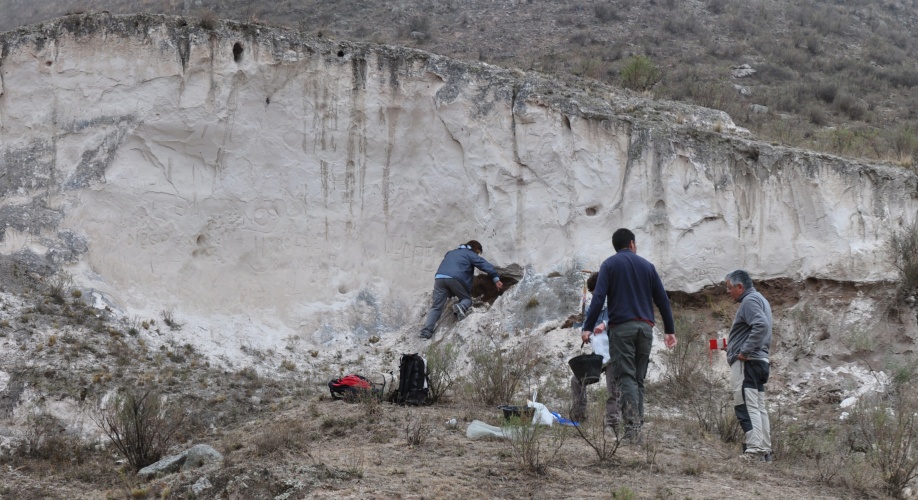 "Now we can confirm that the eruption of Cerro Blanco volcano was the event that produced those large Holocene ash deposits that blanketed and cover a large area of the Puna and neighboring areas of north-western Argentina," says José Luis Fernández Turiel, leading author of the study.

The vegetal remains preserved in the sediment layers embedded below the ash deposits were dated using carbon 14.

Researchers were able to establish that the eruption took place 4 200 years ago and reconstructed the transport and the fall of the ash that created the deposits.

In addition, pyroclastic flows filled up the surrounding valleys with thick ignimbrite deposits, some of them located about 35 km (21 miles) away from the volcano. The emptying of the magmatic chamber caused by the eruption led to the collapse of the volcanic building and the formation of a complex volcanic caldera.

"The geodynamic context of the area determines large explosive eruptions. These are a type of eruptions characterized by rhyolitic magma, with high silica and gas content," says Francisco José Pérez Torrado, a researcher at the Institute of Environmental Studies and Natural Resources of the University of Las Palmas de Gran Canaria. 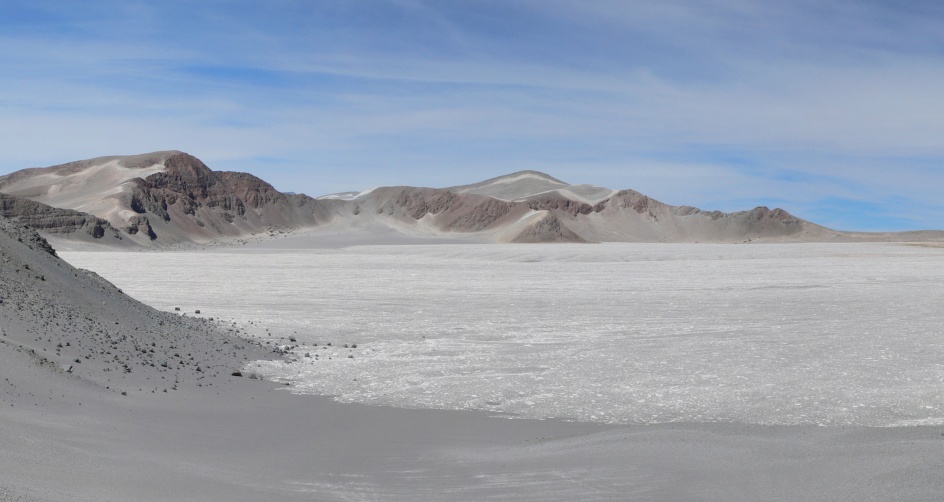 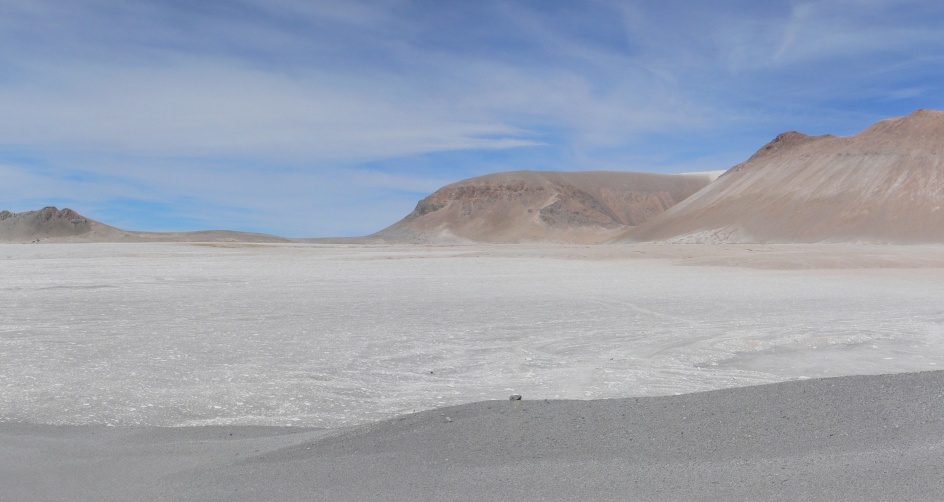 According to Perez Torrado, 'the eruption was not annular, following the edge of the caldera; in this case, it was focused on a point to the edge. It was an explosive eruption that pushed an ash and gas cloud at an altitude of almost 32 km (19.8 miles) according to our simulations.'

According to the study, the volume of deposited ash in this eruption was bigger than 170 km3 (40 mi3) which lead to the researchers to estimate that the eruption of Cerro Blanco had a Volcanic Explosivity Index (VEI) of 7.

This places it among the largest volcanic global events of the last 10 000 years, similar to the eruption that occurred on the Island of Santorini which meant the end of the Minoan civilization.

Moreover, the volume of magma ejected by Cerro Blanco volcano eruption doubled to the magma ejected by the eruption of the Tambora volcano in 1815, which is thought to be the cause of global cooling (1815 is known as 'the year without summer'). 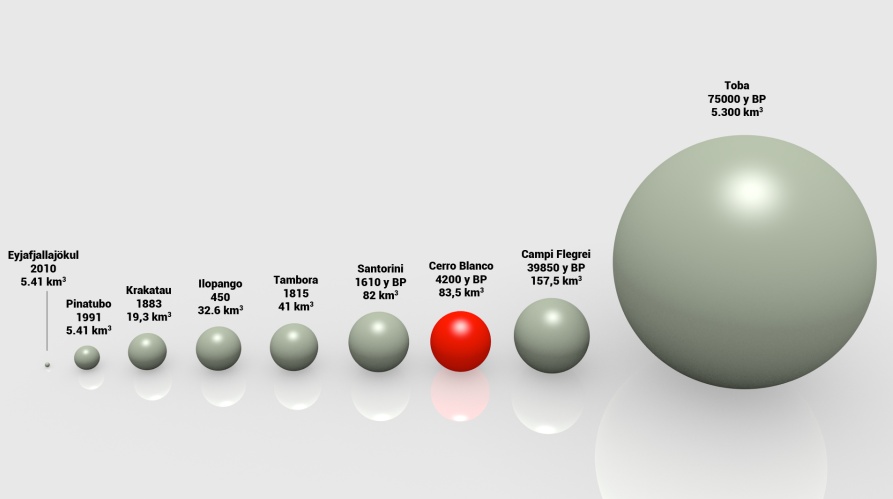 The present study takes its origin from a previous project conducted to determine whether the high arsenic levels in the water of the Chaco-Pampeana Plain was related to ash-fall deposits of the Central and Southern Andes Volcanic Zones. It was during this work when the team of researchers began to characterize the ashes.

"We verified that the ash from the analyzed deposits in the north came mainly from a single eruption, unlike in the south, which clearly came from different volcanoes," recalls Alejandro Rodríguez González, from the Institute of Environmental Studies and Natural Resources of the University of Las Palmas de Gran Canaria.

"Our investigation changes the model of active volcanism of the Central Andean Volcanic Zone. Until now, it was thought that volcanism worked exactly the same, like in the south: many volcanoes with many eruptions over time. What we have seen in our research is that there are few eruptions, but highly explosive and erupting large volumes of magma," said Fernández-Turiel.

These findings offer researchers an excellent temporal milestone to study many geological, archaeological and paleoclimatic features, among others, which occurred around the middle Holocene in a broad geographical area of South America.

"The determination of the scope and occurrence of this large eruption provides new information to interpret different aspects of hunter-gatherer societies which inhabited north-western Argentina during the Holocene, as the different occupation of the spaces, the changes in the mobility of the groups due to modification and alteration of routes that allowed the connection between different ecological environments, the changes in the ecosystems and the health of the prehispanic populations, among others topics," according to Norma Ratto, archaeologist at the Institute of Cultures of the University of Buenos Aires and CONICET (UBA-CONICET).

The eruption of the Cerro Blanco Volcanic Complex, in the southern Puna, NW Argentina dated at 4410-4150 at cal BP, was investigated to produce new information on stratigraphy, geomorphology, physical volcanology, radiocarbon dating, petrography, and geochemistry. Identification of pre-, syn-, and post-boiler products allowed us to estimate the distribution of the Plinian fallout during the paroxysmal syn-caldera phase of the eruption. The new results provide evidence for a major rhyolitic explosive eruption that spread volcanic deposits over an area of ​​~ 500,000 km2, accumulating> 100 km3 of tephra (bulk volume). This last value exceeds the lower threshold of Volcanic Explosive Index (VEI) of 7. Ash-fall deposits mantled the region at distances> 400 km from source and thick pyroclastic-flow deposits filled neighboring valleys up to 35 km away. This eruption is the largest documented during the five millennia in the Central Volcanic Zone of the Andes, and is probably one of the largest Holocene explosive eruptions in the world. We have also identified two additional rhyolitic eruptions in the region from two other eruptive sources: one during the Early-Holocene and another in the Late-Holocene. The identification and characterization of these significant volcanic events provide new constraints into regional Holocene geological and archaeological records.