Problems in brief Myanmar’s struggling democracy and oppression on Rohingya minority have made the world media busy in covering the country, eventually hindering the news of numerous sufferings across the country.

In most of the human development Myanmar ranks poorly because of persistent crisis in most of the basic requirements for civilized life. A UN-led survey released in this year reveals that corruption is still a top concern which discourages international investment in infrastructure and service sector development. 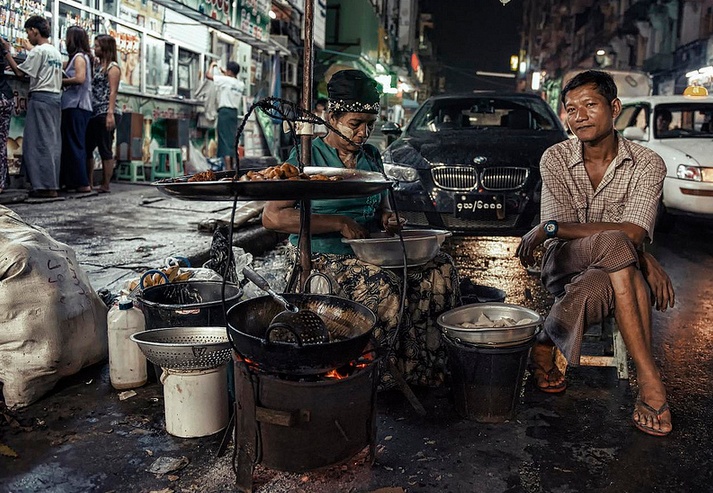 Scarce rainfall in Myanmar central Dry Zone which includes all the major cities leads to severe water shortages that sweep across Myanmar, leaving river levels low and freshwater wells empty. Most of the Government pumps are not working properly and the available water from pump-well is contaminated and often causes water borne diseases.

Thousands of Kachins in the Triangle Areas of Kachin State in Northern Myanmar experience acute shortage of water. In Dala, it is seen that hundreds of men, women and children queue to dip their plastic buckets into a lotus-filled reservoir just outside Myanmar’s biggest city, Yangon.

Many families rely on charity groups to get potable water. Aye Thu Zar, age of 19 years, said AP News, “There are seven in my family, I can collect three buckets of water… that’s enough for drinking and cooking. But the walking to home hurts my shoulders. My legs, too. I can barely sleep at night the pain is so bad.” 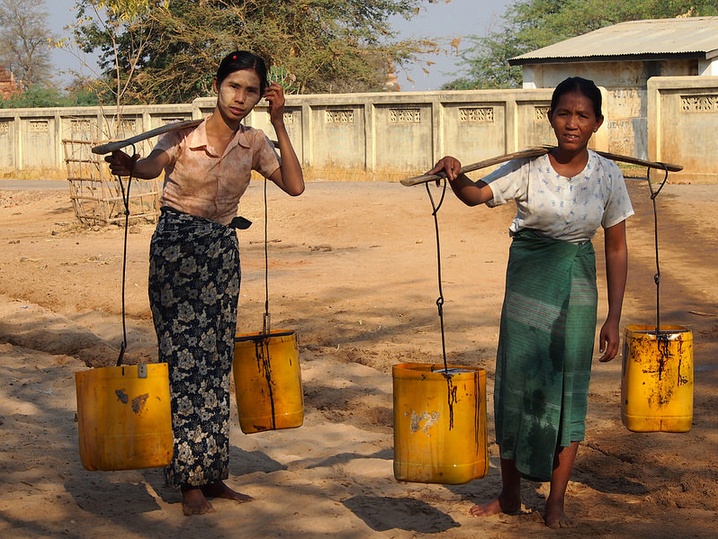 Arsenic contamination in drinking water has been found in all over Myanmar, according to Save the Children’s report. The arsenic level of the water in these areas is well above both WHO and Myanmar National standard. More than 20 percent people are estimated to be exposed in arsenic pollution. Country level data regarding this dangerous contamination are also extremely limited as no comprehensive study has been conducted yet. Thus, predominantly impoverished population of Myanmar are exposed to a serious health risk.

Poor health and sanitation Myanmar has one of the highest child mortality among ASEAN countries. Independent Commission for Aid Impact (ICAI) identified significant weaknesses in all the WHO standards of functional health system. Current budget for health care is near about 4 percent of country’s total expenditure. Current ratio of skilled health worker is 1.1 per 1000 people. Infant mortality (IMS) rate is 54 out of thousand is primarily caused by diarrhea, acute respiratory infection, malaria, prematurity and malnutrition. Besides, nine percent of infants in Myanmar are born underweight and 35 percent of children under five years of age are stunted.

Study shows in most of the states, quality public health care is unavailable. Moreover, most health services are concentrated in urban areas while 70 per cent of the population live in rural areas. The condition is more severe in Rakhain state, from where international aid groups were forced out of the area by the government in February and March, members of the minority Muslim Rohingya community are at dire health crisis there.

Food insecurity is rampant across the country – 85% of households in the state of Kayah face frequent food shortages, and the country’s agricultural production as a whole is routinely undermined by erratic rainfall.

Dry zone of Myanmar covers 58 townships and approximately quarter of the population lives in the area. More than half of the townships is reported to have high level of food insecurity that continues even after rainy season due to insufficient rain at the right time for growing crops. 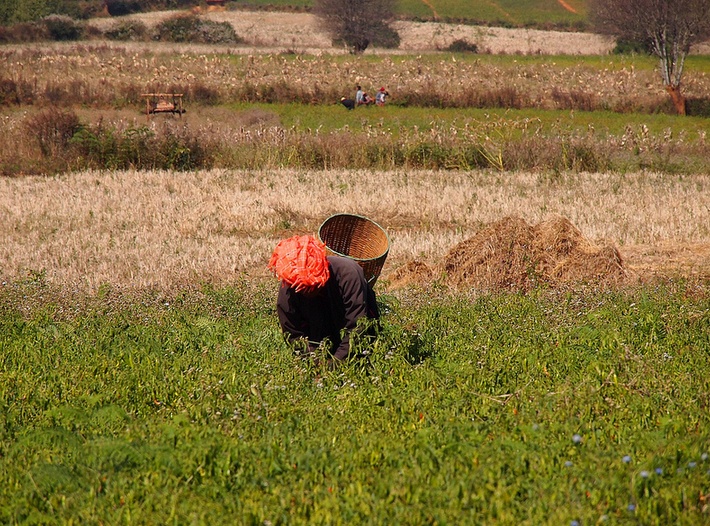 The central regions of Mandalay, Magway and Lower Sagaing covering 13 percent of the country, have some of the lowest rainfall levels recently. About 60 percent of households of the area are farmers and 40 percent landless. Any crop failure in this area creates great havoc to the life of the already marginalized society.

Sectarian clashes between Buddhist and ethnic minority Rohingya people uprooted thousands of ethnic Rohingya people who are still denied to be listed as internally displaced persons (IDPs). As a result they are not allowed to receive any humanitarian aid and the world does not hear their sufferings.

Electricity is a luxury for most parts of Myanmar. Only 30 percent of the country’s population has access to electricity, and even they have to deal with frequent outages.

Yangon, the largest city, suffers from electricity shortages and the demand far outstrips current supply. This city consumes 45% of Myanmar’s electricity, the figure that is very likely to increase over time. Power cut is a daily occurrence in Yangon resulting 6 to 12 and Mandalay, the second largest city, receiving only four to five hours of electricity in a day during summer.

Despite some reforms the situation there has no noteworthy improvement been observed. Even in downtown Yangon becomes unexpectedly murky once the sun sets. 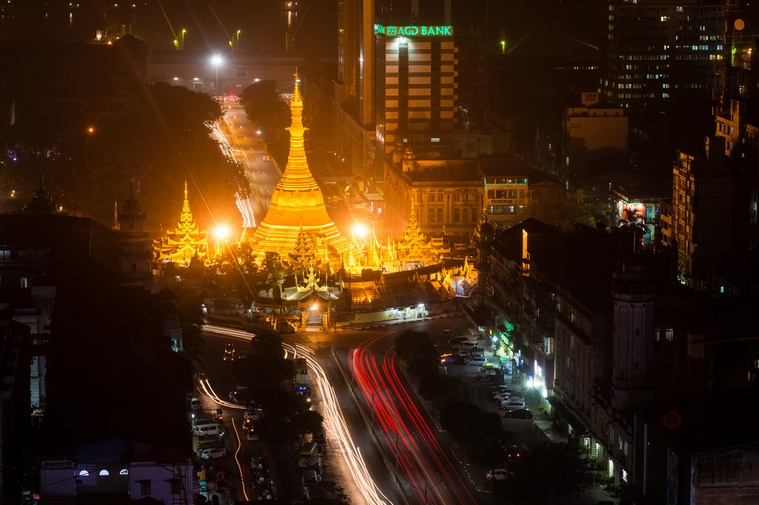 Hospitals and clinics which are chronically underfunded struggle to provide health service. Many rural villages experience 24 hours black out during summer when the demand is in the peak. Children go to sleep once the Sun goes down instead of doing homework.

People depended on small business are struggling to maximize their income. Industrial sectors are the hardest hit by the chronic power crisis in Myanmar.

Since the lifting of sanctions thousands of business executives visit but only few stay because of poor infrastructure, lack of secured power supply and wide spread corruption. That is why local people call them “NATO meaning- No Action, Talk Only”.

Myanmar is the largest synthetic drug producer in Southeast Asia and world second largest producer of opium right after Afghanistan. Reports in Aljazeera, New York Times and many others suggest that the drug trading turned into a very complex to solve this country. In a varied degree every authority- government, rebel groups, business man and politicians are involved in this destructive business.

Under the current regime a little has been done to prosecute the criminals, instead, in many cases the rich drug dealers are respected by the government. In the border areas of Shan and Kachin states, where most of the opium is produced, about 1.5 percent adult is addicted. It is widely believed in Kachin that price of heroin is kept low artificially because the authorities are trying to wipe out their culture. In Mandalay, Myanmar’s second largest city, north of Yangon, there is a steady drug supply where many people are migrated from different parts of the country. Thus, this city is gradually becoming a hub of spreading drug addiction in other states.

According to the latest report from the UN Office on Drugs and Crime (UNODC), drug cultivation, production and use is now rising at the steepest rate in years. In 2013, poppy cultivation in Myanmar rose by 13% than previous year.

In summary, recent reforms are unable to make meaningful changes on the ground and yet many concerns remain, for example, disparity against minorities, poor state of agriculture, health crisis, drug trading etc. 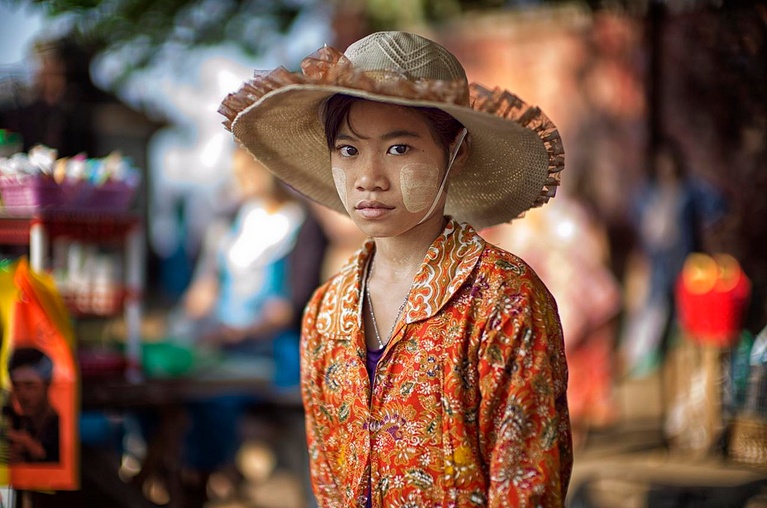 This is just a glimpse of the myriad problems people have been facing across Myanmar for last several decades. All of these problems created measurable life for many impoverished people. One unsolved problem sprouts other problems. Leaving behind any unsolved issue would make the future grim. It is clear at this point that there is no easy and immediate solution is waiting for the people of Myanmar.