New research into an Icelandic eruption has shed light on how the Earth's crust forms, according to a paper published today in Nature.

When the Bárðarbunga volcano, which is buried beneath Iceland's Vatnajökull ice cap, reawakened in August 2014, scientists had a rare opportunity to monitor how the magma flowed through cracks in the rock away from the volcano. The molten rock forms vertical sheet-like features known as dykes, which force the surrounding rock apart.

Study co-author Professor Andy Hooper from the Centre for Observation and Modelling of Earthquakes, volcanoes and Tectonics (COMET) at the University of Leeds explained: "New crust forms where two tectonic plates are moving away from each other. Mostly this happens beneath the oceans, where it is difficult to observe. 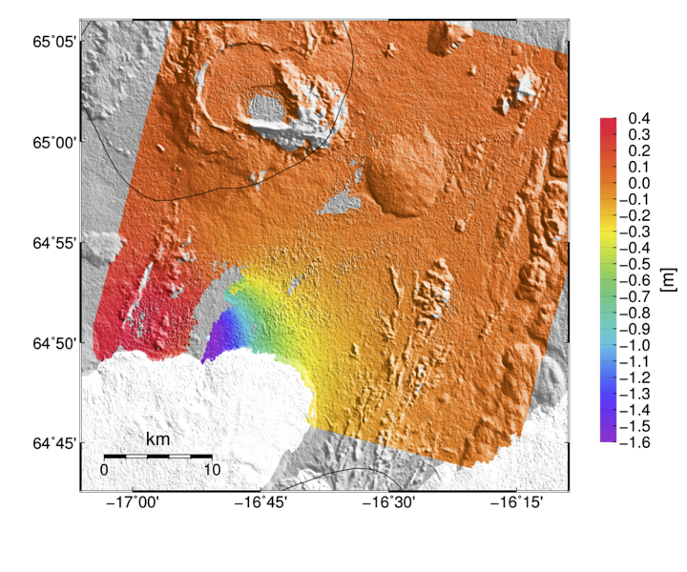 Map from radar interferometry (InSAR) showing the deformation that occurred over the dyke north of the ice cap, between August 13 and August 29, 2014. The measured deformation is a combination of both horizontal and vertical movements, and reaches close to 2 metres in total. The red area indicates movement west and up, while the purple and yellow areas indicate movement east and up. Credit: Data processing was carried out by COMET, University of Leeds and the Institute of Earth Science, University of Iceland. Processing carried out using CSK Products, © ASI (Italian Space Agency) – 2014, delivered under an ASI license to use. COSMO-SkyMed images have been provided in the framework of the Geohazard Supersite Initiative.

"However, in Iceland this happens beneath dry land. The events leading to the eruption in August 2014 are the first time that such a rifting episode has occurred there and been observed with modern tools, like GPS and satellite radar."

Although it has a long history of eruptions, Bárðarbunga has been increasingly restless since 2005. There was a particularly dynamic period in August and September this year, when more than 22,000 earthquakes were recorded in or around the volcano in just four weeks, due to stress being released as magma forced its way through the rock.

Using GPS and satellite measurements, the team were able to track the path of the magma for over 45km before it reached a point where it began to erupt, and continues to do so to this day. The rate of dyke propagation was variable and slowed as the magma reached natural barriers, which were overcome by the build-up of pressure, creating a new segment.

The dyke grows in segments, breaking through from one to the next by the build up of pressure. This explains how focused upwelling of magma under central volcanoes is effectively redistributed over large distances to create new upper crust at divergent plate boundaries, the authors conclude.

As well as the dyke, the team found 'ice cauldrons' – shallow depressions in the ice with circular crevasses, where the base of the glacier had been melted by magma. In addition, radar measurements showed that the ice inside Bárðarbunga's crater had sunk by 16m, as the volcano floor collapsed.

COMET PhD student Karsten Spaans from the University of Leeds, a co-author of the study, added: "Using radar measurements from space, we can form an image of caldera movement occurring in one day. Usually we expect to see just noise in the image, but we were amazed to see up to 55cm of subsidence." 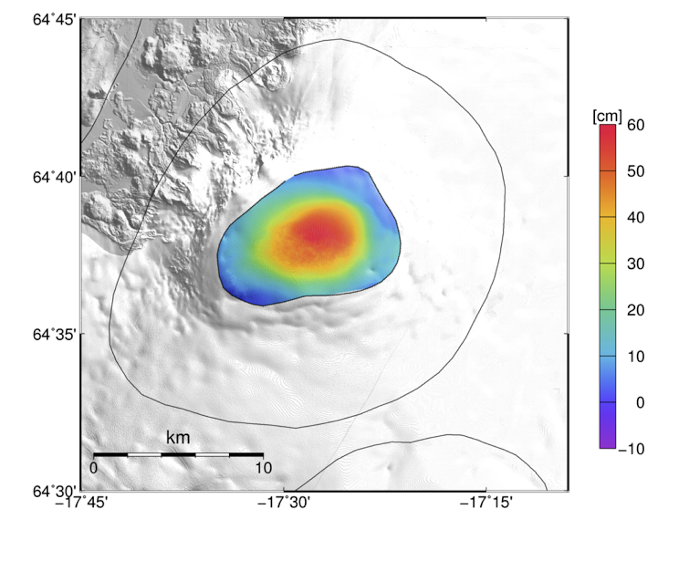 Map from radar interferometry (InSAR) showing the subsidence that occurred inside the Bárðarbunga caldera, between August 27 and August 28, 2014. Positive numbers indicate movement away from the satellite, which in this case means mostly downward. Credit: Data processing was carried out by COMET, University of Leeds and the Institute of Earth Science, University of Iceland. Processing carried out using CSK Products, © ASI (Italian Space Agency) – 2014, delivered under an ASI license to use. COSMO-SkyMed images have been provided in the framework of the Geohazard Supersite Initiative.

Like other liquids, magma flows along the path of least resistance, which explains why the dyke at Bárðarbunga changed direction as it progressed. Magma flow was influenced mostly by the lie of the land to start with, but as it moved away from the steeper slopes, the influence of plate movements became more important.

Summarising the findings, Professor Hooper said: "Our observations of this event showed that the magma injected into the crust took an incredibly roundabout path and proceeded in fits and starts.

"Initially we were surprised at this complexity, but it turns out we can explain all the twists and turns with a relatively simple model, which considers just the pressure of rock and ice above, and the pull exerted by the plates moving apart."