A recently discovered Near-Earth Asteroid designated "2014 UR116" does not represent an impact threat to our planet, as some media reports claim, NASA's Near-Earth Object Program Office said in a press release yesterday.

"While this approximately 400-meter sized asteroid has a three year orbital period around the Sun and returns to the Earth's neighborhood periodically, it does not represent a threat because it's orbital path does not pass sufficiently close to the Earth's orbit," their report said.

Furthermore, they say, the Director of the Minor Planet Center in Cambridge Massachusetts, Tim Spahr, has also re-computed this object's orbit after noticing that it was the same as an object observed six years ago. Using both sets of observations, the future motion of this asteroid was carried further forward in time using the automatic computations made by the Sentry system at JPL. These computations rule out this object as an impact threat to Earth (or any other planet) for at least the next 150 years. 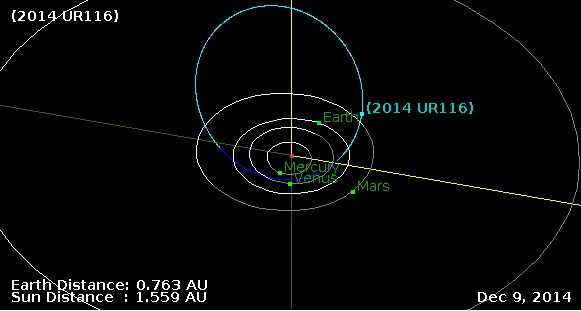 They added that any statements about risk for impact of discovered asteroids and comets should be verified by scientists and the media by accessing NASA's Near Earth Object (NEO) Program web site at http://neo.jpl.nasa.gov/risk/ or the European equivalent, the NEO Dynamic Site at http://newton.dm.unipi.it/neodys/index.php?pc=4.1.

A leading scientist on the team which discovered the asteroid, Vladimir Lipunov, said that the scientists now know its orbit and its period which is 3 years, but they cannot say precisely when the asteroid will approach the Earth.

“We should track it constantly. Because if we have a single mistake, there will be a catastrophe. The consequences can be very serious,” he said in the documentary “Asteroids attack” [below] posted on Roscosmos website. (RT)

“Asteroids attack” – video courtesy Roscosmos. Note: turn on subtitles and translate to any language you want.

RT's news report continues… "Viktoria Damm from the Siberian Geodesic Academy Planetarium told TASS news agency that when the asteroid flies near Mars, its trajectory may change. That’s why the time of approach is unknown but she believes it will not happen in the coming two years."

In case of a collision with the Earth the energy of the explosion could be a thousand times greater than the Chelyabinsk meteorite. When a meteorite burst above the city of Chelyabinsk in February 2013, the impact was estimated to be equivalent to 440-500 kilotons of TNT. But the Chelyabinsk meteorite was relatively small, about 17 meters in diameter and it disintegrated with a blast at an altitude of over 20 kilometers. (RT)

2014 UR116 was found on October 27, 2014, by the MASTER-II observatory in Kislovodsk, Russia, and while it does not represent an immediate threat to our planet it should be noted that near-Earth asteroids and comets do represent a reasonable threat and should not be taken lightly. They are flying around us, they do hit planets and other space bodies and there is nothing we can do about it, except to search and plan how to deal with them, at least for now.

At a press conference held on April 21, 2014, at the Seattle Museum of Flight, three prominent astronauts supporting the B612 Foundation presented a visualization of new data showing the surprising frequency at which the Earth is hit by asteroids.

Between 2000 and 2013, the Nuclear Test Ban Treaty Organization, which operates a network of sensors that monitors Earth around the clock listening for the infrasound signature of nuclear detonations detected 26 explosions on Earth ranging in energy from 1 – 600 kilotons – all caused not by nuclear explosions, but rather by asteroid impacts. To put that in perspective, the atomic bomb that destroyed Hiroshima in 1945, exploded with an energy impact of 15 kilotons.

They also showed data that our planet is continuously colliding with fragments of asteroids, the largest in recent times exploding over Tunguska, Siberia in 1908 with an energy impact of 5 – 15 megatons. More recently, we witnessed the 600-kiloton impact in Chelyabinsk, Russia in 2013, and asteroid impacts greater than 20 kilotons occurred in South Sulawesi, Indonesia in 2009, in the Southern Ocean in 2004, and in the Mediterranean Sea in 2002.

Important to note as well is the fact that none of these asteroids were detected or tracked in advance by any existing space-based or terrestrial observatory.

The B612 Foundation released a video visualization of these findings, showing the impact size range and location of all 26 explosions.

A map released on November 14, 2014, by NASA's NEO Observation Program reveals that small asteroids frequently enter and disintegrate in the Earth's atmosphere with random distribution around the globe. That map visualizes data gathered by U.S. government sensors from 1994 to 2013 and it indicates that Earth's atmosphere was impacted by small asteroids, resulting in a bolide (or fireball), on 556 separate occasions in a 20-year period. Almost all asteroids of this size disintegrate in the atmosphere and are usually harmless.

The largest impact recorded during this 20-year interval was the "out of nowhere" Chelyabinsk event on February 15, 2013.

This diagram maps the data gathered from 1994-2013 on small asteroids impacting Earth's atmosphere to create very bright meteors, technically called "bolides" and commonly referred to as "fireballs".  Sizes of red dots (daytime impacts) and blue dots (nighttime impacts) are proportional to the optical radiated energy of impacts measured in billions of Joules (GJ) of energy, and show the location of impacts from objects about 1 meter (3 feet) to almost 20 meters (60 feet) in size. Image credit: Planetary Science