​An upslope breakout in the area of Apa’a Street near the cemetery had entered a private property yesterday morning and at approximately 21:55 UTC (11:55 HST) the residential structure or house was ignited by the advancing flow.

There is no threat to any other properties at this time, Civil Defense said.

The evacuation advisory for those residents down slope of the flow will continue and residents will be kept informed of the flow status and advancement.

The Pahoa Village Road between Apa’a Street and the Post Office Road will remain closed and limited to area residents only. In addition, Civil Defense and public safety personnel will be operating in the area round the clock to maintain close observations of flow activity. 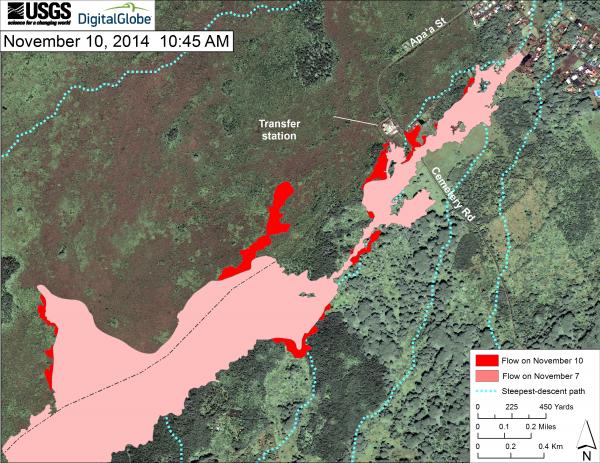 This map uses a satellite image acquired in March 2014 (provided by Digital Globe) as a base at 1:13,000 scale to show the area around the front of the June 27th lava flow. The area of the flow on November 7, 2014, at 3:30 PM is shown in pink, while expansion of the flow as mapped on November 10 at 10:45 AM is shown in red. The latitude and longitude of the front of the narrow finger of lava advancing toward Pāhoa was 19.49590, -154.95256 (Decimal Degrees; WGS84). The dotted blue lines show steepest-descent paths in the area, calculated from a 1983 digital elevation model (DEM). Image credit: USGS / HVO

In the 2.5 km (1.5 mi) upslope of Apaʻa St. / Cemetery Road, minor expansion of the flow field has occurred over the weekend, HVO reported in their latest update.

The most significant activity on the entire flow field was a narrow finger of lava that has advanced downslope from the wide portion of the flow just above the narrow gulley through which lava advanced toward Pāhoa more than two weeks ago. That finger was about 700 meters (765 yards) above the transfer station as of late Monday morning.

Summit tilt was steady for most of Monday morning, but a period of inflation began at about 14:00 HST, with a commensurate rise in lava level within the summit eruptive vent. 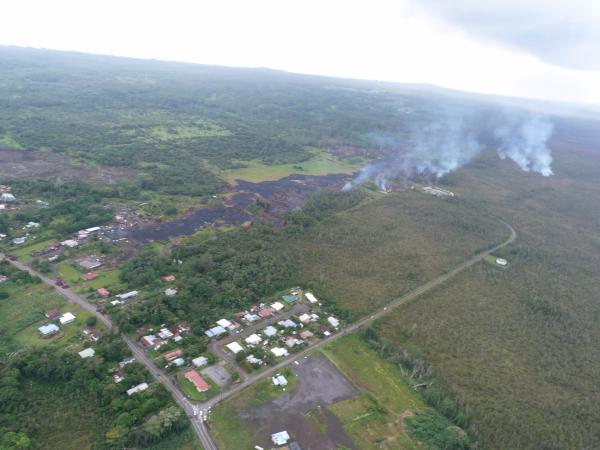 Helicopter view of the June 27th flow tip showing areas of active lava on the morning of November 10. Smoke from burning vegetation rises from the north margin of the flow. Active areas include regions just downslope and upslope of the transfer station, and a new lobe of lava, marked by a smoke plume at the upper right of the photo, is moving to the northeast approximately 750 meters (820 yards) above Apaʻa Street / Cemetery Road. Image credit: USGS / HVO