Hawaiian Kīlauea continues to erupt at its summit and within the East Rift Zone with elevated gas emissions. Currently, the June 27th lava flow is advancing northeast between Apa`a St/Cemetery Rd and Pāhoa Village Road. 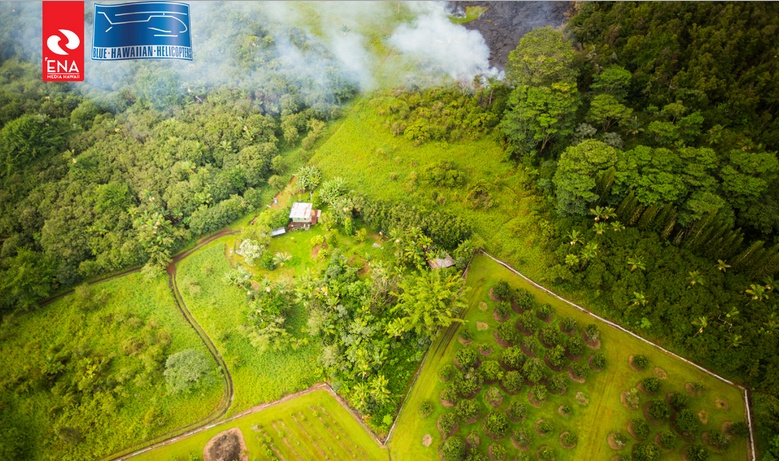 "Smoke conditions were light to moderate with moderate trade winds from the northeast pushing the smoke in a south southwest direction. Smoke conditions may increase in some areas and residents down wind that may be sensitive or have respiratory problems are advised to take necessary precautions and to remain indoors.

The Pahoa Village Road between Apa’a Street and the Post Office Road will remain closed and limited to area residents only. In addition, Civil Defense and public safety personnel will be operating in the area round the clock to maintain close observations of flow activity. Additional updates will be broadcasted as conditions change." 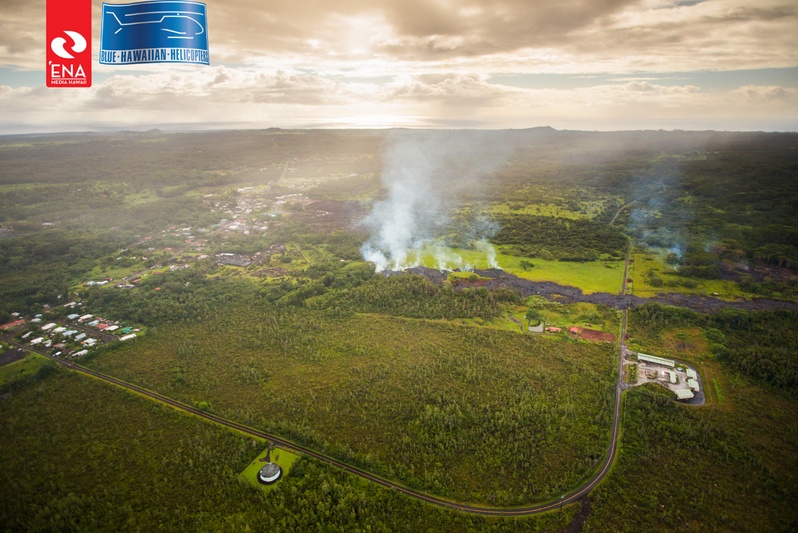 ​The Hawaii State Department of Education (DOE) is closing some schools ahead of the rapidly advancing lava flow. The pace of the flow has accelerated the implementation of DOE’s contingency plans, which will affect about 1 700 students and 300 employees beginning this week.

The Hawaii County Department of Water Supply will be shutting valves on each side of the lava flow once it reaches Pahoa Village Road. This will result in a drop in pressure for some customers north of the lava including Āpa‘a Street as well as along Highway 130 from Keonepoko Standpipe/spigot Station up to and including the upper portion of Kahakai Boulevard. Water Supply says the change will occur imminently. The water system pressure will be decreased by approximately 50 pounds per square inch (psi).

Starting Monday, October 27, the bus stops fronting the Pāhoa 7-11, and at Pāhoa School will not be serviced by Hele-On. New stops have been established along Highway 130 and Highway 132 due to the Pāhoa Village Road closure because of the pending lava flows. 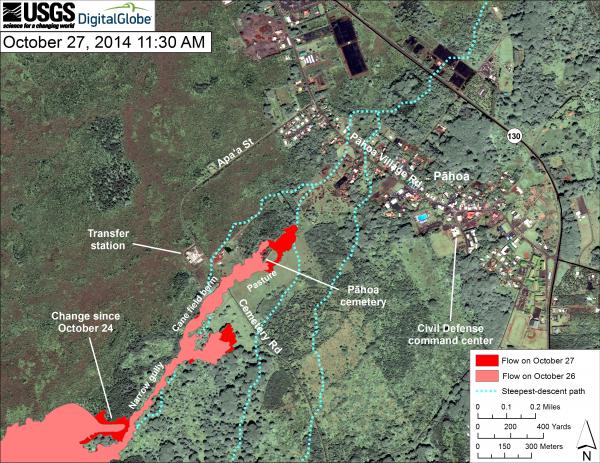 This map uses a satellite image acquired in March 2014 (provided by Digital Globe) as a base to show the area around the front of the June 27th lava flow. The area of the flow on October 26, 2014, at 12:30 PM is shown in pink, while widening and advancement of the flow as mapped on October 27 at 11:30 AM is shown in red. The dotted blue lines show steepest-descent paths in the area, calculated from a 1983 digital elevation model (DEM).

The flow advanced about 180 meters (200 yards) during the preceding 23 hours, and reached thick vegetation beyond the northeast edge of the lush pasture that the flow had been traversing. At the time of mapping, the flow was 540 meters (590 yards) directly upslope from Pāhoa Village Road. The latitude and longitude of the front of the narrow finger of lava advancing toward Pāhoa was 19.49307, -154.95469 (Decimal Degrees; WGS84). Though not shown on this map, the flow advanced an additional 30 meters (33 yards) by 4:30 PM.

Steepest-descent path analysis is based on the assumption that the DEM perfectly represents the earth's surface. DEMs, however, are not perfect, so the dotted blue lines can be used to infer only approximate flow paths. For calculation details, see http://pubs.usgs.gov/of/2007/1264/. (see large map) Image credit: USGS / HVO

HVO update issued 18:25 UTC on October 27 said that as on the previous evening, there was a small, rainfall-induced tilt signal at Puʻu ʻŌʻō yesterday evening, otherwise, no significant tilt was recorded.

"Seismic tremor remained steady. Glow was visible overnight above several outgassing openings in the crater floor, but there were no significant changes in activity within the crater.

The most recent sulfur-dioxide emission-rate measurement for the East Rift Zone was 340 tonnes per day (from all sources) on October 23, 2014.

GPS receivers in the summit area have recorded slight contraction across the caldera since early July, but no significant change in elevation during that time. The most recent sulfur-dioxide emission rate measurements for the summit were 2,700–3,600 tonnes/day for the week ending October 21, 2014. A small amount of particulate material was carried aloft by the plume."

Scientists of the USGS Hawaiian Volcano Observatory conducted ground observations of the June 27th lava flow on Tuesday, October 28, 2014. The flow continued to move through private property today. The advance rate of the narrow leading edge has been variable over the past day, and as high as 16 meters (17 yards) per hour. The flow width was less than about 50 meters (55 yards) at the leading edge and as wide as 150 meters (165 yards) immediately upslope as breakouts have occurred along margins of the flow. Portions of the flow continued to inflate by as much as 2 meters as new fresh new lava was delivered to the advancing flow front.

The lava lobe upslope of Apa`a Street advanced about 30 meters (82 yards) since yesterday.

Daily updates about Kīlauea's ongoing eruptions, recent images and videos of summit and East Rift Zone volcanic activity, and data about recent earthquakes are posted on the HVO Web site at http://hvo.wr.usgs.gov.)

HVO scientists will continue to monitor the flow from the ground overnight and Wednesday; an overflight is scheduled for Wednesday morning, and new maps of the entire June 27th flow will be posted later in the day. A daily update will be posted in the morning, and status reports will be issued as new information becomes available. Updates are posted at http://hvo.wr.usgs.gov/activity/kilaueastatus.php.