South American Copahue volcano has again entered a phase of increased activity. At least two moderately strong explosions were recorded at 10:52 and 16:49 UTC on October 11, 2014. Ash plumes reached maximum heights of 3 600 m. Intermittent incandescence from the crater was visible during the night of October 10 – 11.

The surface activity of the last few days seems to suggest that the volcanic system is in a phase of greater imbalance, which is manifested by the occurrence of a series of smaller ash emissions, correlated with recorded seismic events.

The technical alert was changed to Orange and the eruptive process could start within days or weeks, according to SERNAGEOMIN notice issued on October 11.

On Sunday, October 12, SERNAGEOMIN reported that seismic events associated with the fluid dynamics inside the volcano continue and warned that the frequent scenario of the volcano is the occurrence of phreatomagmatic or phreatic eruptions (generated by interaction of magma and water).

The proximal danger area susceptible to be affected by lava and / or lahars falls within a radius of 15 km. The region likely to be affected by ash fall with thicknesses greater than 1 cm is primarily located east of volcano.

A 3 km restriction zone around the volcano was recommended. 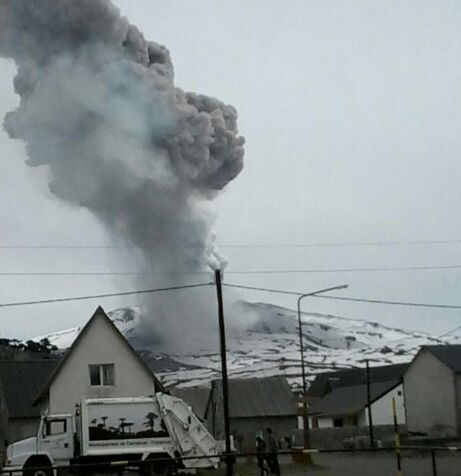 The Buenos Aires VAAC reported that during October 6 – 7 diffuse steam-and-gas emissions from Copahue detected in satellite images contained a small amount of ash. The webcam showed that the emission source was near the summit.

The frequent, sometimes continuous steam and ash emissions that had been observed during the previous days seem to have gradually become stronger.

Acidic hot springs occur below the eastern outlet of the crater lake, contributing to the acidity of the Río Agrio, and another geothermal zone is located within Caviahue caldera about 7 km NE of the summit. Infrequent mild-to-moderate explosive eruptions have been recorded at Copahue since the 18th century.