The discovery of a split-second burst of radio waves by scientists using the Arecibo radio telescope in Puerto Rico provides important new evidence of mysterious pulses that appear to come from deep in outer space.

The finding by an international team of astronomers, published July 10 in The Astrophysical Journal, marks the first time that a so-called "fast radio burst" has been detected using an instrument other than the Parkes radio telescope in Australia. Scientists using the Parkes Observatory have recorded a handful of such events, but the lack of any similar findings by other facilities had led to speculation that the Australian instrument might have been picking up signals originating from sources on or near Earth.

"Our result is important because it eliminates any doubt that these radio bursts are truly of cosmic origin," said Victoria Kaspi, an astrophysics professor at McGill University in Montreal and Principal Investigator for the pulsar-survey project that detected this fast radio burst. "The radio waves show every sign of having come from far outside our galaxy – a really exciting prospect." 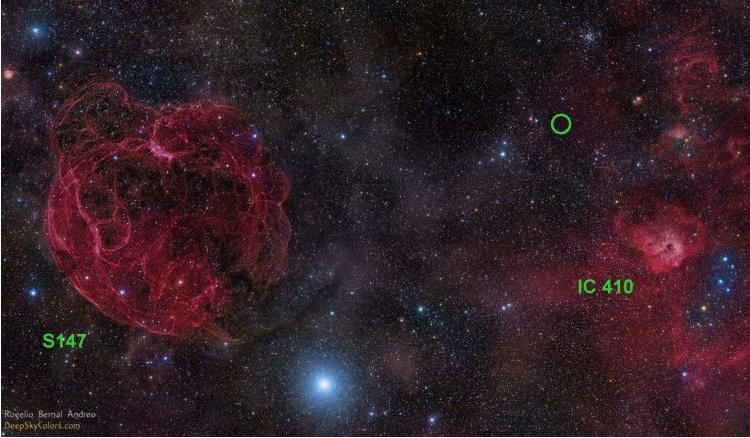 ​Optical sky image of the area in the constellation Auriga where the fast radio burst FRB 121102 has been detected. The position of the burst, between the old supernova remnant S147 (left) and the star formation region IC 410 (right) is marked with a green circle. Image credit: Rogelio Bernal Andreo (DeepSkyColors.com).

Exactly what may be causing such radio bursts represents a major new enigma for astrophysicists. Possibilities include a range of exotic astrophysical objects, such as evaporating black holes, mergers of neutron stars, or flares from magnetars — a type of neutron star with extremely powerful magnetic fields.

"The race is now on to figure out what causes these bursts.  If they really originate from outside the Milky Way, that would be extremely exciting," says Jason Hessels, co-author and astronomer at ASTRON and the University of Amsterdam.

The unusual pulse was detected on Nov. 2, 2012, at the Arecibo Observatory, a National Science Foundation-sponsored facility that boasts the world's largest and most sensitive radio telescope, with a radio-mirror dish spanning 305 metres and covering about 20 acres.

While fast radio bursts last just a few thousandths of a second and have rarely been detected, the international team of scientists reporting the Arecibo finding confirm previous estimates that these strange cosmic bursts occur roughly 10,000 times a day over the whole sky. This astonishingly large number is inferred by calculating how much sky was observed, and for how long, in order to make the few detections that have so far been reported.

"The brightness and duration of this event, and the inferred rate at which these bursts occur, are all consistent with the properties of the bursts previously detected by the Parkes telescope in Australia," said Laura Spitler, lead author of the new paper.

The bursts appear to be coming from beyond the Milky Way galaxy based on measurement of an effect known as plasma dispersion. Pulses that travel through the cosmos are distinguished from man-made interference by the effect of interstellar electrons, which cause radio waves to travel more slowly at lower radio frequencies. The burst detected by the Arecibo telescope has three times the maximum dispersion measure that would be expected from a source within the galaxy, the scientists report.

The discovery was made as part of the Pulsar Arecibo L-Band Feed Array (PALFA) survey, which aims to find a large sample of pulsars and to discover rare objects useful for probing fundamental aspects of neutron star physics and testing theories of gravitational physics.

"It's fantastic that the PALFA survey is discovering not just pulsars, but also other powerful bursts of radio radiation," says Joeri van Leeuwen, co-author and astronomer at ASTRON and the University of Amsterdam.

Efforts are now under way to use the Low Frequency Array LOFAR and the upgraded Westerbork/Apertif telescope to observe broad swaths of the sky and detect more fast radio bursts. Hessels and Van Leeuwen, leaders of these respective burst-detection projects, expect many more discoveries and a better understanding of this mysterious cosmic phenomenon. 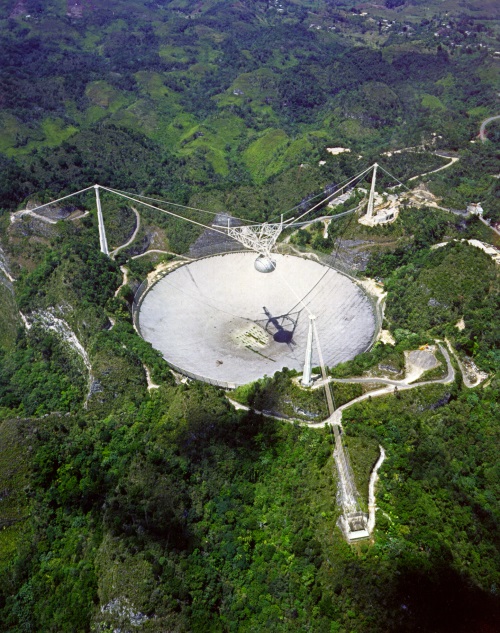 Featured image: Optical sky image of the area in the constellation Auriga where the fast radio burst FRB 121102 has been detected. The position of the burst, between the old supernova remnant S147 (left) and the star formation region IC 410 (right) is marked with a green circle. Image credit: Rogelio Bernal Andreo (DeepSkyColors.com).