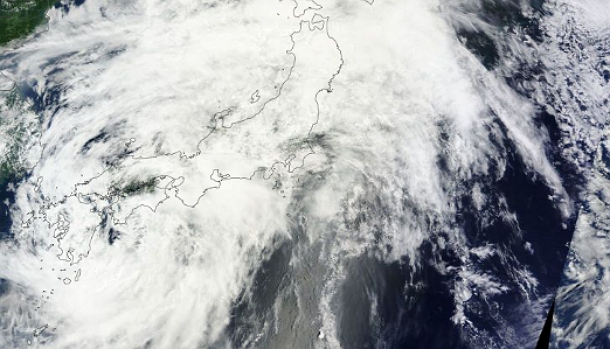 Neoguri has quickly weakened as it made landfall over Japan, but it will still bring heavy rain and possible mudslides. Land interaction and cooler waters weakened Neoguri in to tropical storm system. Neoguri is predicted to become extra-tropical low system during the next 12 hours.

Neoguri is the strongest typhoon so far in the 2014 Western Pacific season. Neoguri has claimed 3 lives and left 45 injured over the past several days. At least 27 homes have been destroyed in Okinawa and Kyushu most due to flooding.

Typhoon Neoguri has brought torrential rainfall over the Okinawa and the Southern Japanese islands on July 8/9, 2014. Nago Okinawa saw 438 mm of rainfall in the past 24hrs. Yomitan Village on Okinawa’s main island recorded an unprecedented 96.5 millimeters of rainfall per hour on July 9, 2014. Okinawa’s main island has recorded 300 millimeters, which is double the average for July.

Record breaking floods continue to impact the island. Neoguri brought 188 mm (7.4 inches) in six hours to Tarumi, a ward of Kobe City, and 103.5 mm (4 inches) rain in seven hours to Yakushima, Kagoshima Prefecture. Hiwasa had 58.5 mm (2.3 inches) of rain fall in one hour.

Neoguri will continue to track north east over the next 24 hours bringing heavy rainfall across Japan. Some areas could see up to 200 mm (8 inch) of rain. 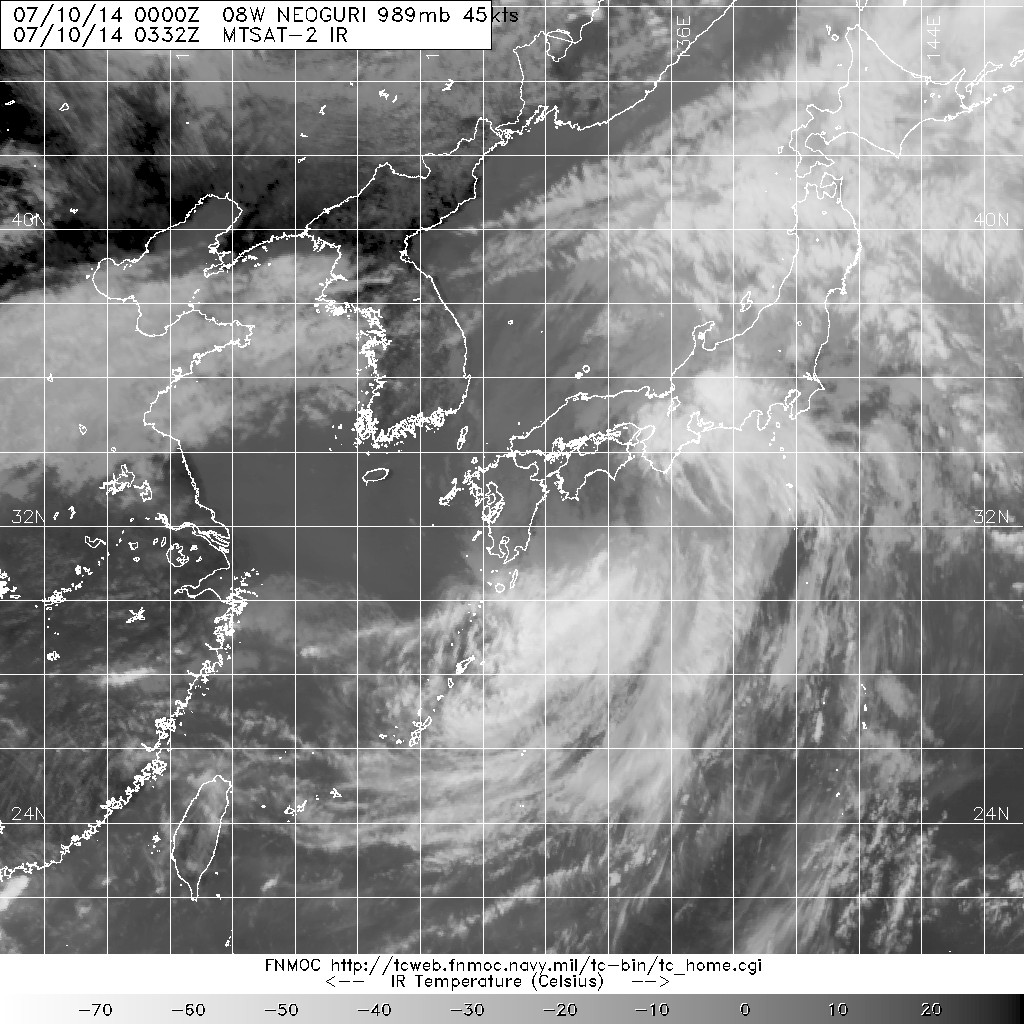 Land interaction, increasing vertical wind shear, and cooling sea surface temperatures all contribute to Neoguri's rapid decay as it moves over northern Honshu in to July 11, 2014. However,  gale force conditions are still likely along the pacific coastlines of Japan. The system is expected to take extra-tropical transition during the next 12 hours, and to become a cold-core low shortly after. 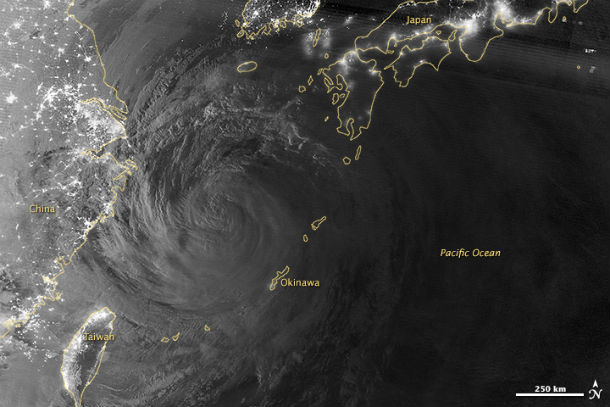 The Visible Infrared Imaging Radiometer Suite (VIIRS) on the Suomi NPP satellite captured this nighttime image of the storm at 17:07 UUTC on July 8, 2014 At the time, Neoguri was a category 2 typhoon moving through the East China Sea. (Credit: VIIRS/Suomi NPP/LANCE/EOSDIS Rapid Response.Caption by Michael Carlowicz.) 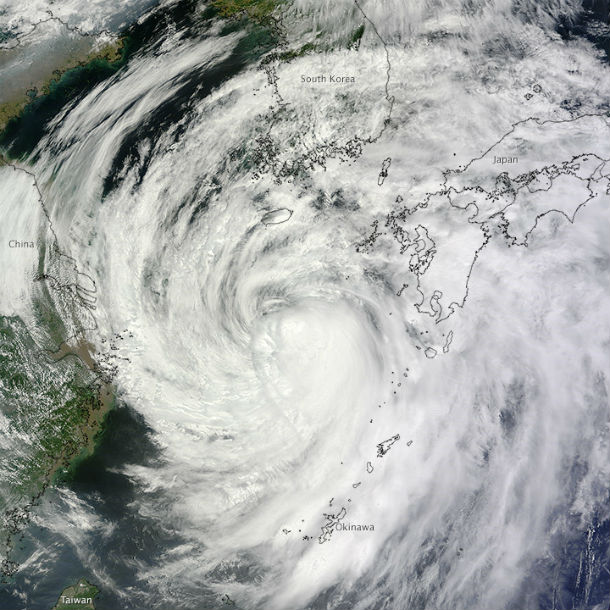 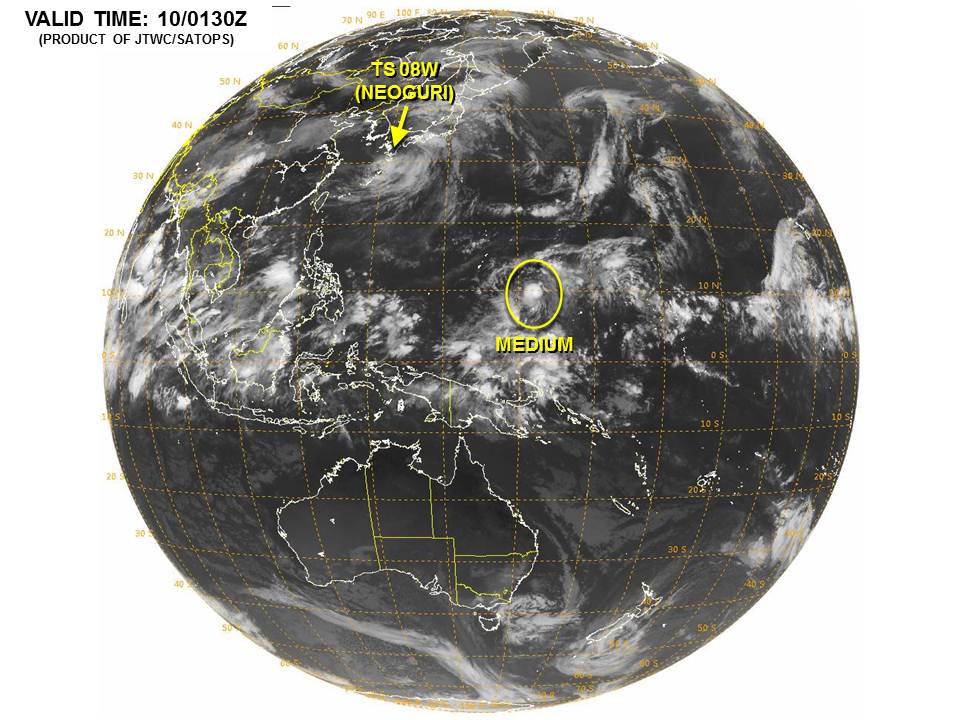