This powerful earthquake lasted about 30 seconds.

USGS issued yellow alert for shaking-related fatalities and economic losses. Some casualties and damage are possible and the impact should be relatively localized. Past yellow alerts have required a local or regional level response.

Overall, the population in this region resides in structures that are a mix of vulnerable and earthquake resistant construction. The predominant vulnerable building types are mud wall and adobe block with concrete bond beam construction. Recent earthquakes in this area have caused secondary hazards such as tsunamis and landslides that might have contributed to losses.

Mexico City is vulnerable to earthquakes because much of it sits atop the muddy sediments of drained lake beds that quiver as quake waves hit.

In Tlaxcala:
– The church of Candelaria suffered non-significant cracks on the walls.
– A landslide happened besides the parking lot of the children hospital (HIT).
– Multiple reports of cracks in walls on the city of Acuitlapilco.
– One house suffered cracks on walls, this happened in the city of Panotla.

Hidalgo:
– The earthquake caused blackouts in some areas of Pachuca.
– Some buildings were evacuated in at least 3 cities of Hidalgo, but no damage has been reported.

Veracruz:
– One building was damaged on it’s electrical grid and on the doors.

Estado de Mexico:
– Blackouts were reported in areas of Ecatepec, Chimalhuacan, Colonia del Valle,  Nezahualcoyotl and Ixtapaluca.
– A blackout was reported in Azcapotzalco as well as a water leak.
– There are reports of cracks in the church “San Mateo Oxtotitlán” in Toluca.
– Also in Toluca a light post collapsed on a house.
– In Nezahualcoyotl houses presented cracks (one of them has a significant crack) as well as the hospital “Gustavo Baz”.
– A gas leak was reported in Metepec.

Puebla:
– In San Martín Texmelucan one house suffered structural damage, and an undetermined number of houses and the cultural complex of Texmelucan suffered cracks on their walls.
– One church in Atlixco has cracked walls.
– 2 walls of 8 meters collapsed in the city of Puebla.

Distrito Federal:
– At least 15 walls collapsed.
– Five buildings had to be evacuated due to significant damage done by the quake.
– Minor damage was reported around Mexico City, including collapsed walls, broken windows and cracked walls/roads.
– 48 homes were damaged.
– Reports of 4 gas leaks and 3 water leaks.
– There’s no power in the delegation of Gustavo Madero and Venustiano Carranza.
– 600 damaged homes due to a hailstorm were even more damaged by today’s quake.
– Reports of collapsed walls and blackouts in Coyoacan.
– Blackouts in Xochimilco, Tlahuac and Cuauhtemoc.
– A wall collapsed in Benito Juarez.
– Fissures reported in buildings of Tlatelolco including a crack in the Bank of Mexico.

Michoacan:
– 1 person was injured when a wall collapsed in the city of Lazaro Cardenas.
– The parish of Sagrado Corazon de Jesus in Los Reyes has structural damage.
– Landslide reported in the hill “La Grava”.
– In Morelia users reported minor damage in the Star Medica hospital, 3 damaged houses, a collapsed wall, a fire caused by the quake and a landslide in the road XXI.
– The church of San Agustin in Morelia was affected by this quake.
– 30 homes in Morelia sustained minor damage.
– Only light damage was reported in Uruapan.

Morelos:
– A landslide was reported in kilometer 249 Cuernavaca-Acapuclo.
– An hospital in Cuernavaca presented fissures on walls.
– In Huitzilac the earthquake damaged a municipal building.
– A local mall presented minor damage in Cuautla.
– In Jiutepec an arc in the entrance of an ex-convent was damaged.
– Two churches in Tlaquiltenango suffered minor damage.

Guerrero:
– At least 700 buildings have sustained damage around the state (including churches, municipal buildings, etc.)
– 12 homes collapsed in  Los Pitos, Arroyo Frio and Los Hornos.
– 9 homes collapsed in Juluchuca, 28 sustained significant damage.
– 521 homes in Tecpan de Galeana were damaged.
– 32 homes were affected (4 of them severely) in Refugio Cristobal Colon.
– 10 houses were damaged in La Barrita.
– 13 landslides have been reported.
– 5 government buildings, 3 hospitals, 2 clinics and one school suffered damage.
– 2 roads have sustained significant damage.
– In Iguala a wall collapsed and a mall presented fissures.
– Blackouts were reported around the state.
– The quake caused a bridge to misaligne from the road.
– In Chilpancingo there were several reports of damaged homes, the church of Santa Maria de la Asuncion was also damaged, a municipal building suffered minor damage and a wall fell on a car without causing injuries.
– An hospital in Acapulco sustained minor damage. 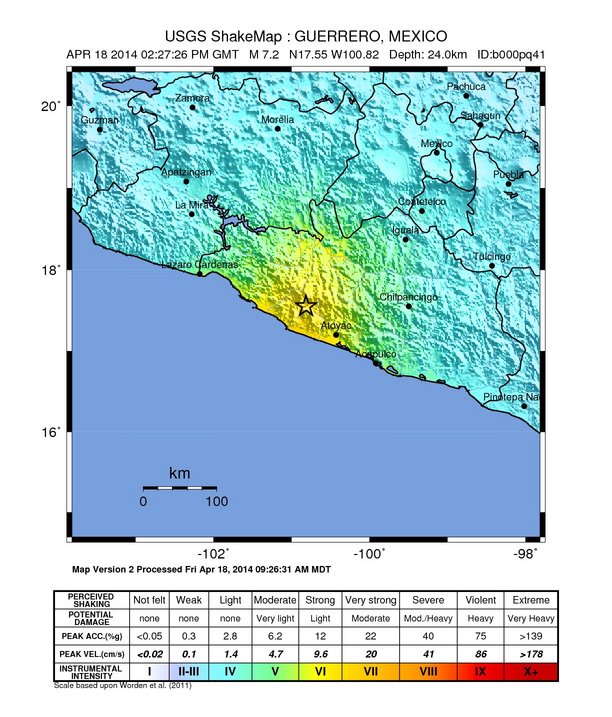 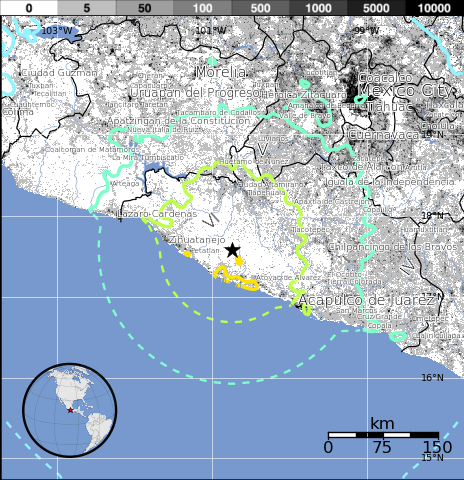 The April 18, 2014 M 7.2 earthquake near the western coast of Mexico occurred in the state of Guerrero, 265 km southwest of Mexico City. The earthquake occurred as the result of thrust motion at shallow depths. The initial location, depth, and mechanism of the April 18 earthquake are broadly consistent with slip on or near the plate boundary interface between the subducting Cocos oceanic sea plate and the North America plate.

The broad scale tectonics of the west coast of Mexico are controlled by the northeastward subduction of the Cocos plate beneath the North America plate at a rate of approximately 65 mm/yr. Earthquakes are a common occurrence along the Middle American subduction zone; the April 2014 earthquake occurred just northwest of the rupture area of the 1957 M 7.8 Guerrero Earthquake.  Since 1975, 23 events of M > 6.0 have occurred within 200 km of the April 2014 earthquake, including events of M 8.0 and M 7.6 (September 1985), M 7.2 (October 1981), and M 7.5 (March 1979), all to the northwest. The 1981 and 1979 events caused 9 and 5 shaking-related fatalities, respectively. The 1985 M 8.0 earthquake, 195 km to the northwest of the April 2014 event, led to more than 9,500 fatalities, mostly in Mexico City, and generated small, local tsunamis. That event was influential in initiating efforts to establish earthquake early warning systems in Mexico City.

The April 2014 earthquake occurred within the “Guerrero Seismic Gap” – an approximately 200 km long segment of the Cocos-North America plate boundary identified to have experienced no significant earthquakes since 1911 (M 7.6). The plate interface in this region is known to be locked, with an earthquake of M 8.1-8.4 thought possible should the entire gap rupture in a single event.