A swarm of very deep earthquakes was recorded in last 24 hours in the area of Punalu`u on the south-west flank of Kilauea volcano, Hawaii. 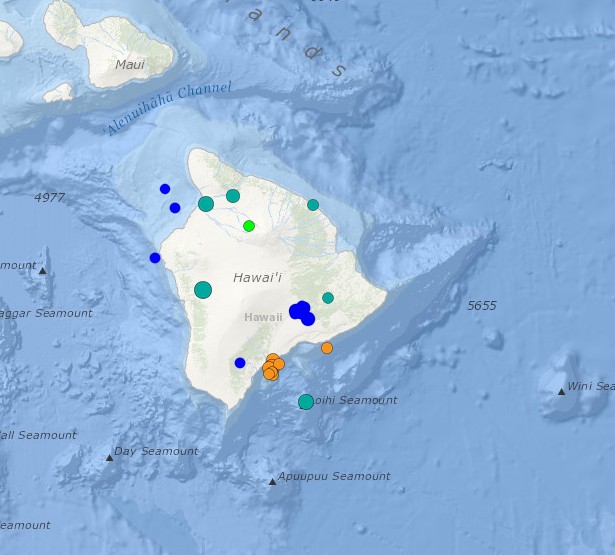 During February 19 – 25 HVO reported that the circulating lava lake occasionally rose and fell in the deep pit within Kilauea's Halema'uma'u Crater. The plume from the vent continued to deposit variable amounts of ash, spatter, and Pele's hair onto nearby areas. At Pu'u 'O'o Crater, glow emanated from spatter cones on the N and S portions of the crater floor, and a lava pond was active in the NE spatter cone.

Image below, captured February 20, shows the flow front of the Kahaualeʻa 2 flow, looking west. The flow front has focused into a new lobe that is slowly migrating through thick forest, triggering scattered forest fires. The smoke from these fires seems to be "seeding" the cloud above it. The active flow front was 7.4 km (4.6 miles) northeast of the vent on Puʻu ʻŌʻō. Mauna Loa can be seen in the distance. 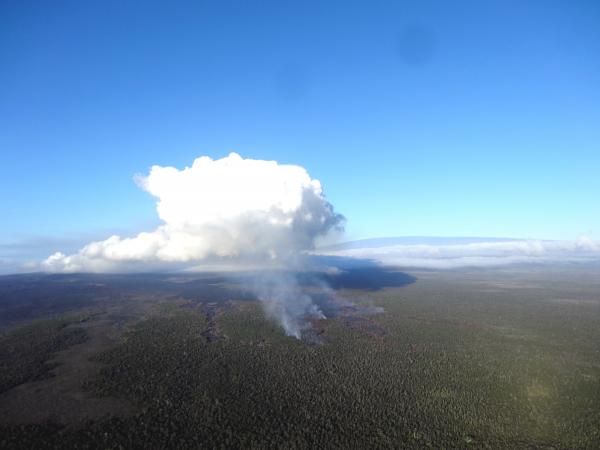 Recent Observations at the middle east rift zone vents: The tiltmeter at Pu`u `O`o cone recorded continuing weak deflationary tilt with several hours of rain-induced increase between 3-7 pm yesterday. The most recent sulfur-dioxide emission-rate measurement was 300 tonnes per day on January 29, 2014, from all east rift zone sources; emission rates typically ranged between 150 and 450 t/d since July 2012. GPS receivers on the north rim and south flank of Pu`u `O`o cone recorded fluctuations mimicking the tilt changes while also recording almost 3 cm of extension since mid-December 2013. The Pu`u `O`o eruption continued with no significant changes. Spatter cones on the floor of Pu`u `O`o crater displayed persistent glow with a possibly crusted-over lava pond within the collapsed northeast spatter cone (see images and video). The south spatter cone continued to erupt lava across the crater floor until about 10 am yesterday morning.

Recent Observations of the Kahauale`a 2 flow: The northeast spatter cone complex continued to feed the Kahauale`a 2 lava flow and PNcam views early this morning clearly showed multiple active breakouts and fires within the adjoining forested areas near its distal tip. The new breakout, reported yesterday high on the tube, was no longer active last night. Early this year, the Kahauale`a 2 lava flow reached 7.8 km (4.8 mi) northeast of Pu`u `O`o by mid-January before stalling. Recent surface flows have been active as small scattered breakouts behind the flow front. HVO geologists on an overflight Thursday mapped the flow front which showed little expansion over the past two weeks, with most active breakouts back from the flow front and margins. On February 20, the active breakouts extended 7.4 km (4.6 mi) northeast of the vent on Pu`u `O`o mostly covering previously-erupted lava flows.

In general, this slow-moving lava flow has made erratic progress over the past few months. Disruption of the flow front has occurred during strong DI deflation events when the lava supply abruptly decreased causing the flow front to stagnate. DI inflation and resumption of lava supply usually follow a few days later. Breakouts reappear well behind the stalled flow front and take some time to reach the front again. In this way, the flow front has not advanced more than 500 m (1,600 ft) since the first time it stalled in early November, 2013.

Background: The eruption in Kilauea's middle east rift zone started with a fissure eruption on January 3, 1983, and continued with few interruptions at Pu`u `O`o Cone, or temporarily from vents within a few kilometers to the east or west. A fissure eruption on the upper east flank of Pu`u `O`o Cone on Sept. 21, 2011, drained the lava lakes and fed a lava flow (Peace Day flow) that advanced southeast through the abandoned Royal Gardens subdivision to the ocean within Hawai`i Volcanoes National Park in early December 2011. The flows stalled and re-entered the ocean starting on November 24, 2012 until activity started to decline and the ocean entry ceased in August 20, 2013; the flow was dead by early November, 2013. The Kahauale`a flow, which started from the spatter cone/lava lake at the northeast edge of the Pu`u `O`o crater floor in mid-January, 2013, was dead by late April, but a new flow (informally called Kahauale`a 2) became active in the same general area in early May. In general, activity waxes with inflation and wanes with deflation. (HVO) 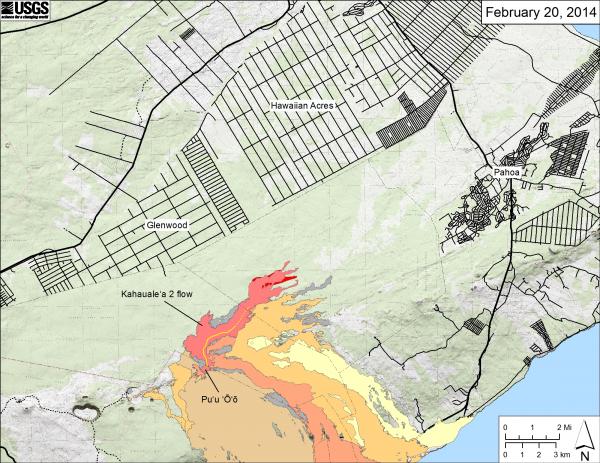 Kahaualeʻa 2 flow in relation to the eastern part of the Big Island as of February 20, 2014. Image credit: HVO. Click lick on the image for larger version. 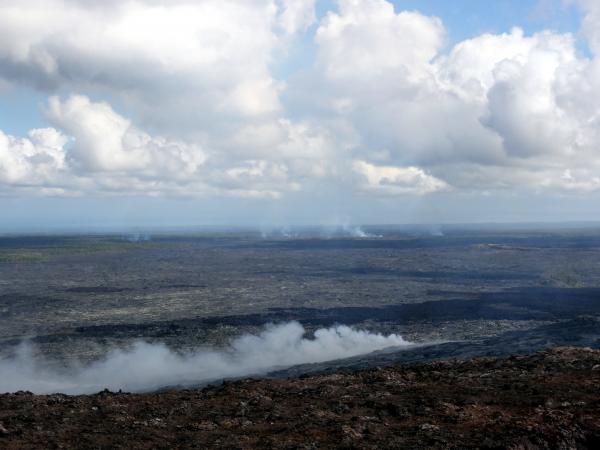 Looking northeast from Puʻu ʻŌʻō, the smoke coming from forest fires at the front of the Kahaualeʻa 2 flow can be seen in the distance. In the foreground, thick fume is coming from the Kahaualeʻa 2 lava tube, which is supplying lava to the flow front. Captured: February 20, 2014. Image credit: HVO 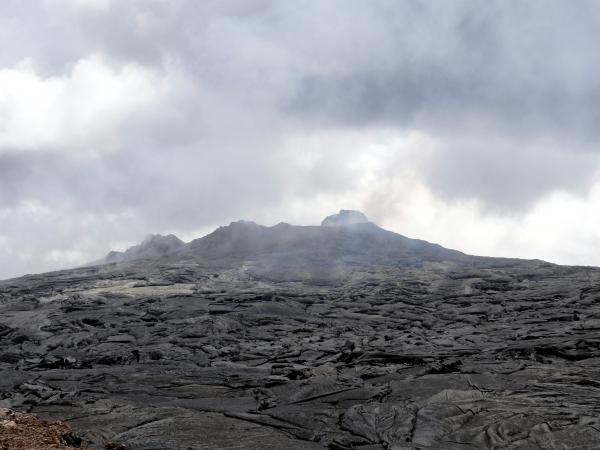 View of the northeast spatter cone in Puʻu ʻŌʻō crater. This small cone is also the vent area for the Kahaualeʻa 2 flow. The cone has recently hosted a small lava pond, but today this seemed to be crusted over. Captured: February 20, 2014. Image credit: HVO

The following image was acquired by the Earth Observing 1 satellite's Advanced Land Imager sensor on February 2, and shows Kīlauea's summit and east rift zone. Although this is a false-color image, the color map has been chosen to mimic what the human eye would expect to see. Active lava is shown by the bright red pixels, present at the summit – in the lava lake at Halemaʻumaʻu Crater – as well as on the east rift zone on the far end of the Kahaualeʻa 2 flow. These active flows are slowly advancing into the forest, and extend to about 6.7 km (4.2 miles) northeast of the vent on Puʻu ʻŌʻō cone. 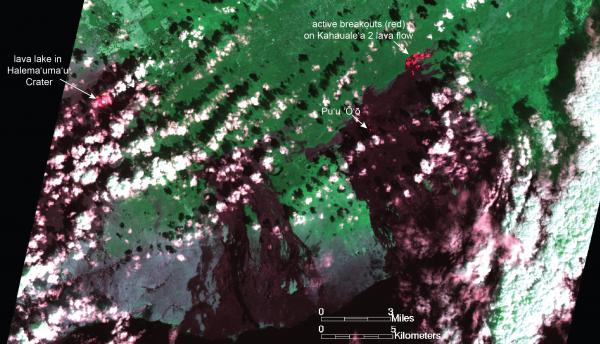 Kilauea, one of five coalescing volcanoes that comprise the island of Hawaii, is one of the world's most active volcanoes. Eruptions at Kilauea originate primarily from the summit caldera or along one of the lengthy E and SW rift zones that extend from the caldera to the sea. About 90% of the surface of Kilauea is formed of lava flows less than about 1,100 years old; 70% of the volcano's surface is younger than 600 years. A long-term eruption from the East rift zone that began in 1983 has produced lava flows covering more than 100 sq km, destroying nearly 200 houses and adding new coastline to the island (GVP).