Mild, persistent strombolian activity is continuing at Etna's New Southeast Crater (NSEC) from the same two eruptive vents within the crater that have been active over the past few days.

Lava emission continues from an effusive vent located within the collapse scar formed on February 11, 2014, and following a diminution in the effusion rate on February 14, lava emission has again slightly increased, feeding a flow several hundred meters long into the direction of the Valle del Bove.

At 11:08 UTC on February 15, a single explosion occurred from the area of the Bocca Nuova-Voragine, which emitted a dense plume of white vapor mixed with diluted ash; this was accompanied by a summit seismic signal of modest amplitude. No further explosvie events were subsequently observed in the same area. The upper part of the image at left shows a frame recorded by the visual monitoring camera on the Montagnola (EMOV), of the vapor plume rising a few hundred meters above the summit of the volcano. 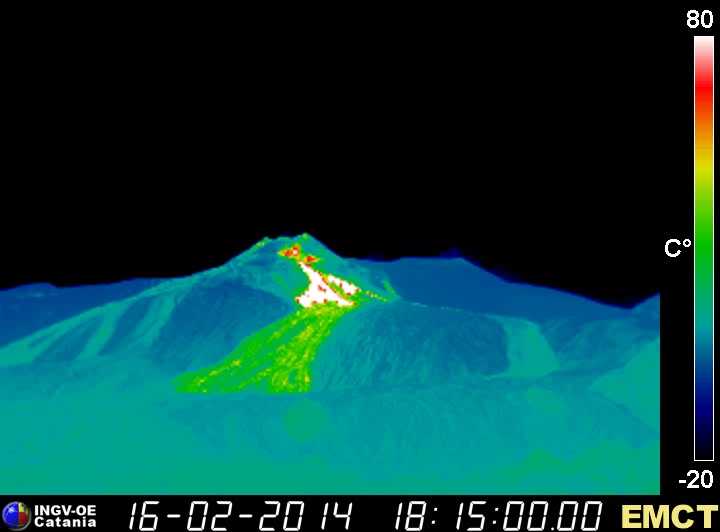 On the afternoon of February 15, a small lava flow started to ooze from a new effusive vent, located at the northern base of the NSEC cone, which expanded about 100 m toward the western headwall of the Valle del Bove; in the evening, this flow appeared to be sarcely fed. This little flow is seen in the lower portion of the image at left, recorded by the thermal monitoring camera at Monte Cagliato (EMCT), next to the larger flow issuing from the vent on the lower eastern flank of the NSEC cone.