A group of scientists led by Geoffrey Collins of Wheaton College has produced the first global geologic map of Ganymede, Jupiter's seventh moon. The map combines the best images obtained during flybys conducted by NASA's Voyager 1 and 2 spacecraft (1979) and Galileo orbiter (1995 to 2003) and is now published by the U. S. Geological Survey as a global map.

The map technically illustrates the varied geologic character of Ganymede's surface and is the first global, geologic map of this icy, outer-planet moon. The geologic map of Ganymede is available for download at: http://www.jpl.nasa.gov/spaceimages/details.php?id=pia17902. 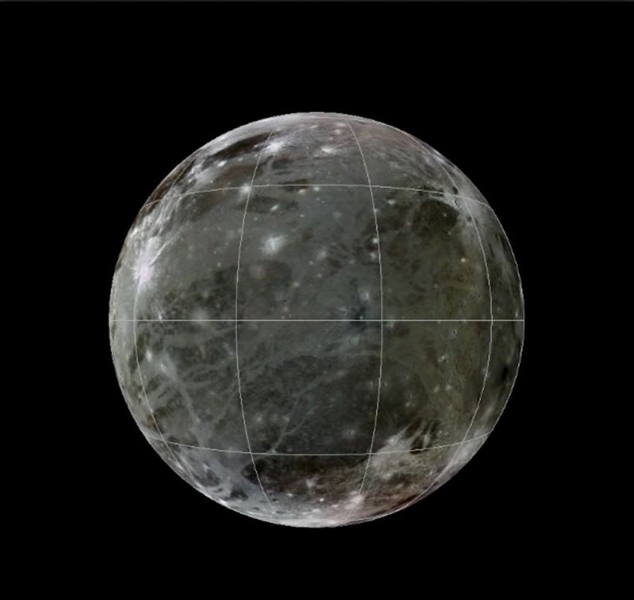 The views incorporate the best available imagery from NASA's Voyager 1 and 2 spacecraft and NASA's Galileo spacecraft.

"This map illustrates the incredible variety of geological features on Ganymede and helps to make order from the apparent chaos of its complex surface," said Robert Pappalardo of NASA's Jet Propulsion Laboratory in Pasadena, Calif. "This map is helping planetary scientists to decipher the evolution of this icy world and will aid in upcoming spacecraft observations."

The European Space Agency's Jupiter Icy Moons Explorer mission is slated to be orbiting Ganymede around 2032. NASA is contributing a U.S.-led instrument and hardware for two European-led instruments for the mission.

Since its discovery in January 1610, Ganymede has been the focus of repeated observation, first by Earth-based telescopes, and later by the flyby missions and spacecraft orbiting Jupiter. These studies depict a complex, icy world whose surface is characterized by the striking contrast between its two major terrain types: the dark, very old, highly cratered regions, and the lighter, somewhat younger (but still very old) regions marked with an extensive array of grooves and ridges.

According to the scientists who have constructed this map, three major geologic periods have been identified for Ganymede that involve the dominance of impact cratering, then tectonic upheaval, followed by a decline in geologic activity. The map, which illustrates surface features, such as furrows, grooves and impact craters, allows scientists to decipher distinct geologic time periods for an object in the outer solar system for the first time.

"The highly detailed, colorful map confirmed a number of outstanding scientific hypotheses regarding Ganymede's geologic history, and also disproved others," said Baerbel Lucchitta, scientist emeritus at the U.S. Geological Survey in Flagstaff, Ariz., who has been involved with geologic mapping of Ganymede since 1980. "For example, the more detailed Galileo images showed that cryovolcanism, or the creation of volcanoes that erupt water and ice, is very rare on Ganymede." 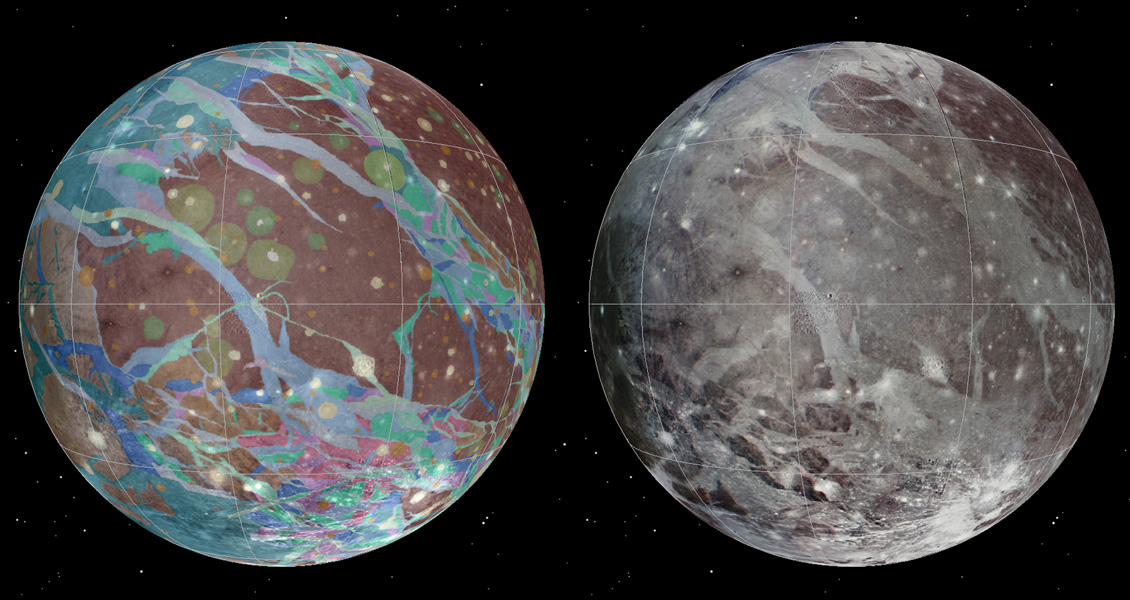 To present the best information in a single view of Jupiter's moon Ganymede, a global image mosaic was assembled, incorporating the best available imagery from NASA's Voyager 1 and 2 spacecraft and NASA's Galileo spacecraft. This image shows Ganymede centered at 200 west longitude. This mosaic (right) served as the base map for the geologic map of Ganymede (left). Image credit: USGS Astrogeology Science Center/Wheaton/NASA/JPL-Caltech

"The surface of Ganymede is more than half as large as all the land area on Earth, so there is a wide diversity of locations to choose from," Collins said. "Ganymede also shows features that are ancient alongside much more recently formed features, adding historical diversity in addition to geographic diversity."

Amateur astronomers can observe Ganymede (with binoculars) in the evening sky this month, as Jupiter is in opposition and easily visible.