On this day, exactly 10 years ago, the largest ever recorded solar flare in history erupted from Sun's western limb. This mega flare started its historic eruption at 19:29 UTC from Active Region 10486 and peaked around 19:50 UTC.

Ionizing radiation from the flare hit Earth's atmosphere soon after the explosion and caused a severe radio blackout. The explosion also hurled a Coronal Mass Ejection (CME) into space but it was only partially directed toward Earth and expected to deliver only a glancing blow to Earth's magnetic field.

The flare saturated the X-ray detectors on the NOAA's GOES satellites for 11 minutes and the jury was out for a while on the definitive classification of the flare.

Speculations on the strength ranged from simply well above X20, to X40 or even X50!

On November 5th, SEC (which is now SWPC) said that their best estimate was X28.

Although the exact number is still debated it was made official that it was the strongest solar flare ever recorded in history and general consensus at the time was to classify it as X28+.

This flare was later upgraded to anywhere above X40, thus the well deserved name it still carries is the "X-Whatever" solar flare.

CME from this mega flare swept past Earth on November 6th at approximately 19:30 UTC and it sparked only minor to moderate geomagnetic storming. Observed KP index at that time was 5.67.

Because smaller flares in the past have caused power outages and widespread auroras there is no doubt that this CME would cause the same or stronger effect if it was squarely directed toward Earth. Being what it is, the effects on Earth were relatively minimal.

Saturation of the GOES detectors also happened once earlier in SOHO's history, on April 4, 2001. That flare was reclassified as an X20 and it still stands as the second most powerful solar flare on record, sharing its position with X20 from August 16, 1989. 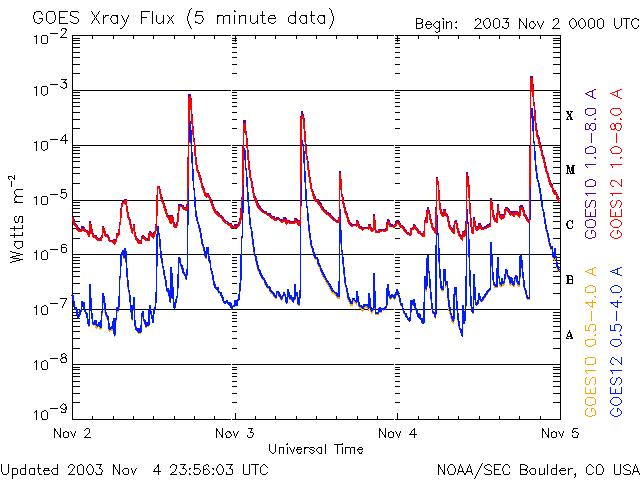 The largest solar flare in recorded history erupted in Solar Cycle 23, which was evidently much stronger than Solar Cycle 24, the one we are currently in.

Current solar cycle has so far produced 23 X-class solar flares, with the strongest being X6.9 on August 9, 2011. The X2.3 solar flare from October 29, 2013 is the fifth strongest solar flare of this cycle so far. It was also located on the western limb.