With a series of paroxysms, Mount Etna has reclaimed its status as one of the most active volcanoes on Earth

After a 4 month respite, Sicily’s massive Etna Volcano is again showing signs of life. Beginning on September 3, 2013, the Osservatorio Etneo (Etna Observatory) observed explosions and puffs of ash at the summit craters and New Southeast Crater. Over the next few weeks explosions became more frequent. Boris Behncke, a volcanologist at the Osservatorio Etneo captured photographs of ash plumes on September 23 and 25.

On September 24, 2013, Landsat 8 collected this natural-color view of the Etna. A plume—likely comprised primarily of volcanic gases—streamed from the summit towards the southwest. The New Southeast Crater is quiet, but the ochre and rust colors in the lava flow to the east of the crater hint at violent activity earlier in the year. 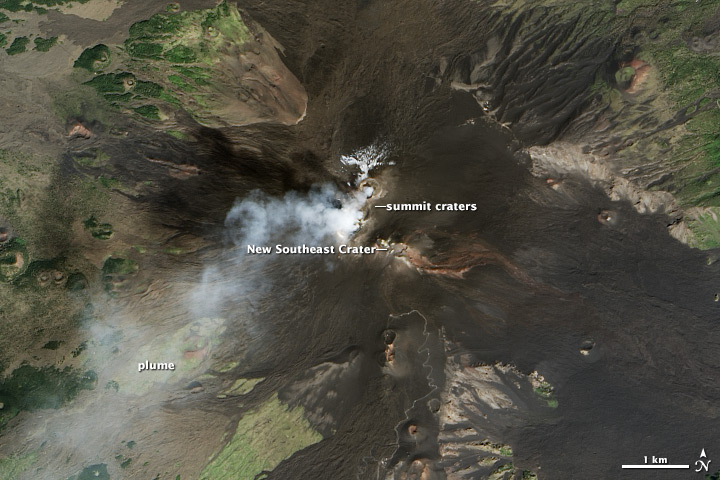 Mount Etna, towering above Catania, Sicily's second largest city, has one of the world's longest documented records of historical volcanism, dating back to 1500 BC. Historical lava flows of basaltic composition cover much of the surface of this massive volcano, whose edifice is the highest and most voluminous in Italy.

The Mongibello stratovolcano, truncated by several small calderas, was constructed during the late Pleistocene and Holocene over an older shield volcano. The most prominent morphological feature of Etna is the Valle del Bove, a 5 x 10 km horseshoe-shaped caldera open to the east. Two styles of eruptive activity typically occur at Etna.

Persistent explosive eruptions, sometimes with minor lava emissions, take place from one or more of the three prominent summit craters, the Central Crater, NE Crater, and SE Crater (the latter formed in 1978). Flank vents, typically with higher effusion rates, are less frequently active and originate from fissures that open progressively downward from near the summit (usually accompanied by strombolian eruptions at the upper end).

Cinder cones are commonly constructed over the vents of lower-flank lava flows. Lava flows extend to the foot of the volcano on all sides and have reached the sea over a broad area on the SE flank (GVP).