After several weeks of being hidden behind the Sun, comet C/2012 S1 (ISON) finally emerged from solar conjunction mid August, and early, tentative measures of its brightness by CIOC hint that it is beginning to slowly brighten up.

CIOC writes: From the ground, we last saw Comet ISON in June of this year, and at the time there was much concern that it had brightened only marginally since January. So when we lost sight of it behind the Sun, speculation began to circulate that maybe ISON really was a dud. Indeed some rather alarmist reports even claimed that the comet had already fizzled! So as the weeks pressed on through July and into August, we waited impatiently for the comet to reappear from behind the Sun, holding our breath and wondering when the first observers would capture it. 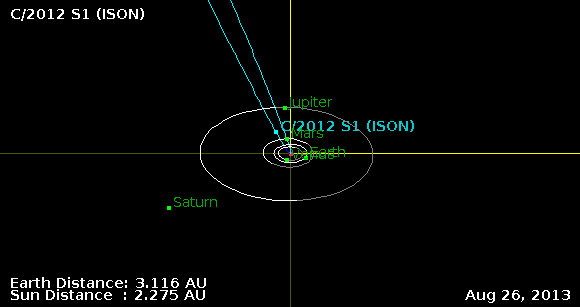 At about 17:24 UTC on October 1, 2013, Comet ISON will fly by Mars within 0.07 AU, which is about six times closer than it will ever come to Earth. (1 AU = One Astronomical Unit, or the mean distance between the Sun and the Earth)

The Mars flyby comes at a key time in Comet ISON’s journey. It will have just crossed the "frost line," a place just outside the orbit of Mars where solar heating is enough to start vaporizing frozen water.

"The volatiles in a comet are 80% to 90% water ice," notes astronomer Carey Lisse of the Johns Hopkins University Applied Physics Lab. "Right now in August almost all the water is still frozen, and the outgassing we see in ISON is driven by carbon dioxide and other lesser constituents. Probably only isolated patches of the comet's nucleus are active." 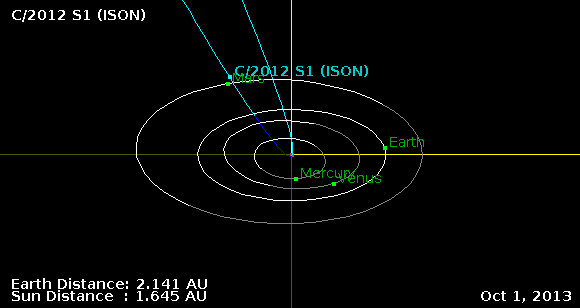 But when ISON crosses the frost line, "the whole comet could erupt in geysers of gas," says Lisse. "Mars orbiters will have a ringside seat."

The amount of outgassing at Mars will give researchers clues to the size of ISON’s nucleus, which is hidden from view deep within the comet’s dusty atmosphere.

"If ISON's nucleus is much bigger than 0.5 km, it will probably survive its Thanksgiving Day brush with the sun," says Lisse.  "It could turn into one of the most spectacular comets in many years."

Meeting the Sun and close approach to Earth

On November 28, 2013 ISON will experience a close encounter with the Sun at a distance of 0.012AU – only around 3 solar radii, which is extremely close to the Sun, and small enough of a distance to qualify it as a sungrazing comet. Contrary to what some people said while this comet was in solar conjunction, ISON has not fallen apart and it is still brightening, though not as quickly as it was expected when it was discovered. 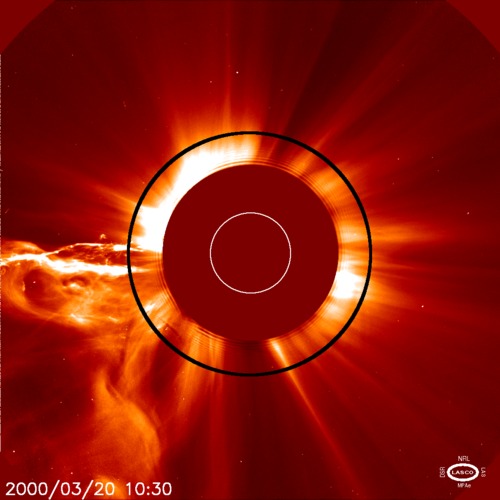 A SOHO/LASCO C2 image. The black circle represents a distance of 3 Solar Radii from the Sun (the white circle). Credit: NASA/SOHO, CIOC 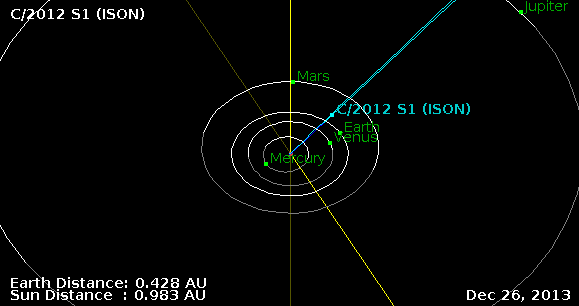 If it indeed survives close approach to Sun, on December 26th at about 22:43 UTC ISON will have its closest approach to our planet. Estimated distance at that time/date is 0.42 AU. Since comets are highly unpredictable it is still not known exactly what kind of show we'll have but we are all ready.

An unprecedented number of NASA spacecraft – 16 – will be observing the comet.  Astronauts on board the International Space Station will be watching, too.

Lisse is also working with NASA to organize a worldwide observing campaign for Comet ISON.  "Our goal is to have every telescope on Earth pointed at the comet when it emerges from the Sun," says Lisse.  "The Mars flyby will give us a sneak preview, providing data we need to predict what we might see."