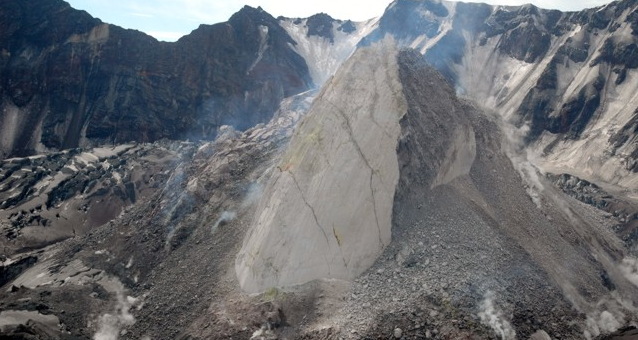 Event depths at Mount Saint Helens average around 13 km and form a radial pattern in relation to the volcano, nearly opposite the northeast-trending spoke of seismicity which had affected the volcano through most of this summer.

Earthquake depths at Rainier are much shallower (averaging 3 to 4 km depth) and likely reflect minor adjustments within the volcano’s hydrothermal system.

Small earthquakes also continue to emanate from the hydrothermal system beneath Lassen Peak volcano (CA) (station MEM), as “slow-slip” continues along the subduction zone west of the volcano.  Seismicity seems to be easing beneath the “South Moat” of Long Valley caldera (CA). 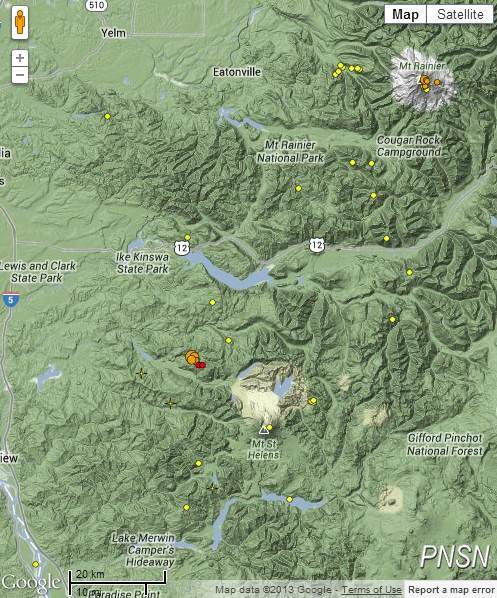 Mount Rainier, at 4392 m the highest peak in the Cascade Range, forms a dramatic backdrop to the Puget Sound region. Large Holocene mudflows from collapse of this massive, heavily glaciated andesitic volcano have reached as far as the Puget Sound lowlands. The present summit was constructed within a large crater breached to the northeast formed by collapse of the volcano during a major explosive eruption about 5600 years that produced the widespread Osceola Mudflow. Rainier has produced eruptions throughout the Holocene, including about a dozen during the past 2600 years; the largest of these occurred about 2200 years ago.

The present-day summit cone is capped by two overlapping craters. Extensive hydrothermal alteration of the upper portion of the volcano has contributed to its structural weakness; an active thermal system has caused periodic melting on flank glaciers and produced an elaborate system of steam caves in the summit icecap. Reported 19th-century eruptions have not left identifiable deposits, but a phreatic eruption may have taken place as recently as 1894 (GVP)

Based on historical evidence, Mount Rainer last erupted on November 21, 1894. The eruption ended on December 24, 1894 and had VEI index of 1.

Prior to 1980, Mount St. Helens formed a conical, youthful volcano sometimes known as the Fuji-san of America. During the 1980 eruption the upper 400 m of the summit was removed by slope failure, leaving a 2 x 3.5 km horseshoe-shaped crater now partially filled by a lava dome. Mount St. Helens was formed during nine eruptive periods beginning about 40-50,000 years ago and has been the most active volcano in the Cascade Range during the Holocene. Prior to 2200 years ago, tephra, lava domes, and pyroclastic flows were erupted, forming the older St. Helens edifice, but few lava flows extended beyond the base of the volcano. The modern edifice was constructed during the last 2200 years, when the volcano produced basaltic as well as andesitic and dacitic products from summit and flank vents. Historical eruptions in the 19th century originated from the Goat Rocks area on the north flank, and were witnessed by early settlers (GVP).

Last GVP weekly report database addition was made in the week of February 9 – February 15, 2011:

CVO reported that on February 14 a M 4.3 earthquake near Mount St. Helens, felt widely throughout SW Washington and NW Oregon, was followed over the next few hours by several aftershocks up to M 2.8. The three largest aftershocks were also felt. All of the earthquakes were located about 8 km N of the crater, near the Johnston Ridge Observatory, at depths of about 4-6 km. CVO also noted that a previous earthquake swarm had occurred in the same area on January 29. The Volcano Alert Level remained at Normal and the Aviation Color Code remained at Green.

Featured image: Moderate explosive eruptions beginning in October 2004 at Mount St. Helens were followed by extrusion of a lava dome. This June 21, 2005 view from the NW shows the new dome with the 1980 crater wall in the background. The light-colored, smooth-surfaced part of the dome, known informally as the whaleback, was formed by slow extrusion of viscous lava. The rougher surface at the right was created when portions of the dome collapsed, forming an apron of talus. The crevassed, ash-covered surface of an uplifted glacier is visible at the middle left.