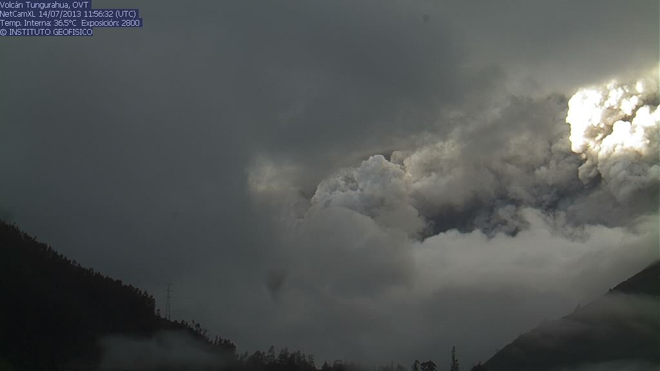 Many regions of Ecuador were affected by heavy ash fall caused by a major eruption at Tungurahua volcano, on July 14, 2013.

According to Lourdes Mayorga from the National Risk Management Secretariat of Ecuador around 200 people were evacuated from villages close to Tungurahua volcano, as a result of the strong eruption that began at 11:47 UTC on July 14, 2013.

According to reports received from the National Secretariat for Risk Management (SNGR), volcano watch volunteers, staff and community of IGEPN (especially social networking), ash fall associated with the eruption at Tungurahua volcano, Ecuador was recorded in the provinces of Tungurahua, Chimborazo, Bolivar, Los Rios, Manabi and Guayas.

The explosion on July 14, 2013 at 11:47 UTC and tremor, caused by the emission, that lasted until 13:40 UTC July 14, generated a high emission column that caused ash and rubble (fragments of slag) fall measuring 5 cm in Chacauco and 4 cm in Bilbao. Meanwhile Huambaló sector was affected by black and pink falling rubble. Sectors that were affected by heavy, thick and black ashfall are Bilbao, Chacauco, Cahuají, Choglontus, El Manzano, Puela, Penipe Shrine Sabañag, Hualcanga, Quero and Mocha. According to the report of the Tungurahua SNGR, Cotaló was affected by mild to moderate drop of thick ash and small gravel.

The GOES-13 satellite was the first to detect to volcanic cloud, since it was scanning the area at 11:58 UTC (about 7 minutes after the beginning of the eruption). The oblique viewing angle from the GOES-15 satellite helped to highlight the darker gray appearance of the ash-laden volcanic cloud, and reveal the long shadow being cast to the west of the tall feature (estimated to be as high as 45,000 feet above ground level). The volcanic cloud appeared largest on the GOES-12 images due to the more direct viewing angle, as well as the later scan time.(Credit: NOAA/GOES)

The Canton Ambato was affected with a thin layer of coarse, black ash. In this canton the central and southern part of the city were affected, Quisapincha, Raisin, San Fernando and Pilahuín. Other sectors affected with medium to fine, black ash are Pelileo, Cevallos, Riobamba, Penipe, Guano, Colt, Guanujo, Guaranda, Echeandía and various sectors of the provinces of Los Rios, Manabi and Guayas, including Quevedo , Porto Viejo, Buena Fe, Valencia, Quinsaloma, Mocache and The Junction.

At the time of this report by IGEPN (July 15, 2013, 01:00 UTC) and according to a field inspection by staff of IGEPN it was found that the pyroclastic flows, generated in the morning of July 14, descended through ravines of Achupasahal and Juive Grande, leaving their deposits a few meters from the road Bathrooms Penipe.

From 16:00 UTC on July 14 there has been a significant decrease in the seismic activity of the volcano, however Tungurahua continues to generate events associated with pressurization processes within the volcanic edifice, like the two volcano-tectonic events recorded.

Although the activity at Tungurahua has decreased significantly, it can not be excluded that in a short period similar new episodes like this last one may occur; just like it happened during eruptions in February 2008 and May 2010, when new eruptive pulses succeeded after the initial event. (IGEPN)