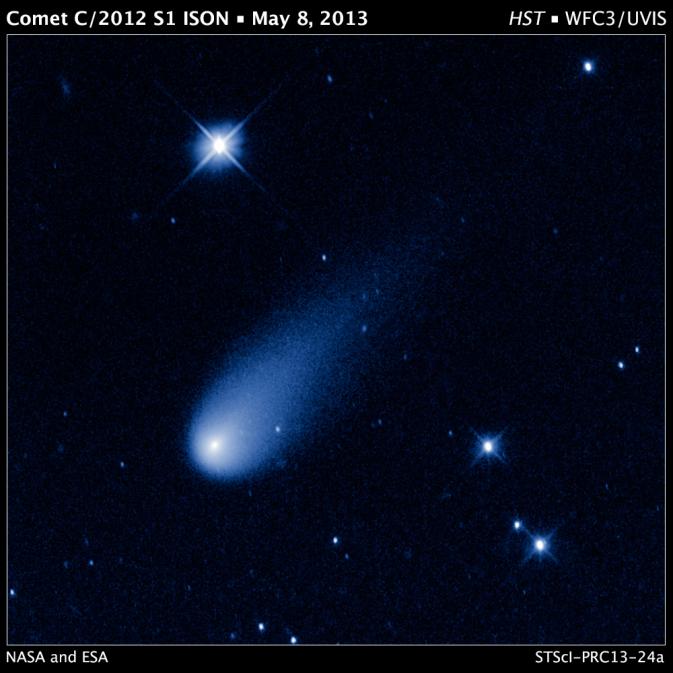 Comet C/2012 S1 ISON is currently flying towards the Sun at a mind boggling speed of about 77 000 km/h (48 000 mph). Recently NASA released a time-lapse movie of the eagerly awaited comet. The movie is composed of images obtained by Hubble Space Telescope on May 8, 2013 at the time ISON was about 650 million km (403 million miles) from our planet, between the orbits of Mars and Jupiter.

In this short video a sequence of Hubble observations over a period of 43 minutes have been compressed into only 5 seconds, in which the comet is seen covering 34 000 miles through space.

The solar wind pressure forms the dirty ice ball`s tail, a combination of gas and dust coming off the icy nucleus surrounded by a bright coma.

With the comet approaching the Sun, its rate of sublimation is increasing, its tail is growing longer, and it is getting brighter.

Hopefully Comet ISON will reach naked-eye visibility in November 2013 as predicted and put on a great show for sky watchers all over the world.

Based on comet's orbit, astronomers believe the comet is coming from Oort cloud, making its first visit to inner solar system. ISON was discovered on September 21, 2012, by Russian astronomers Vitali Nevski and Artyom Novichonok using a telescope of the International Scientific Optical Network (ISON) located near Kislovodsk, Russia.