Hubble Space Telescope has captured one of the sharpest, most detailed observations of a comet breaking apart, which occurred 108 million km (67 million miles) from Earth. Hubble took the images over a three-day span in January 2016 and revealed 25 building-size blocks drifting away from Comet 332P/Ikeya-Murakami at a few km per hour.

Comet 332P was discovered in November 2010, after it surged in brightness and was spotted by two Japanese amateur astronomers, Kaoru Ikeya and Shigeki Murakami. When Hubble spotted the breakup, it was 241 million km (150 million miles) from the Sun, slightly beyond the orbit of Mars.

The three-day observations reveal that the comet shards brighten and dim as icy patches on their surfaces rotate into and out of sunlight. Their shapes change, too, as they break apart.

The fragments comprise about 4 percent of the parent comet and range in size from roughly 20 to 60 m (65 feet to 200 feet). They are moving away from each other at a few km per hour. The resulting debris is now scattered along a 3 800-km-long (3 000 miles) trail.

"We know that comets sometimes disintegrate, but we don't know much about why or how they come apart," explained lead researcher David Jewitt of the University of California at Los Angeles. "The trouble is that it happens quickly and without warning, and so we don't have much chance to get useful data. With Hubble's fantastic resolution, not only do we see really tiny, faint bits of the comet, but we can watch them change from day to day. And that has allowed us to make the best measurements ever obtained on such an object."

This animation, made from a sequence of Hubble Space Telescope images, shows the slow migration of building-size fragments of Comet 332P/Ikeya-Murakami over a three-day period in January 2016. The pieces broke off of the main nucleus in late 2015. Credits: NASA, ESA, D. Jewitt (UCLA)

Images show that the parent comet also changes brightness cyclically, completing a rotation every two to four hours. A visitor to the comet would see the Sun rise and set in as little as an hour. The comet is also much smaller than astronomers thought, measuring only 500 m (1 600 feet) across.

Based on the Hubble data, the research team suggests that sunlight heated up the comet, causing jets of gas and dust to erupt from its surface. Because the nucleus is so small, these jets act like rocket engines, spinning up the comet's rotation. The faster spin rate loosened chunks of material, which are drifting off into space.

The research team calculated that the comet probably shed material over several months, between October and December 2015. Jewitt suggests that even some of the ejected pieces have themselves fallen to bits in a kind of cascading fragmentation. "Our analysis shows that the smaller fragments are not as abundant as one might expect based on the number of bigger chunks," he said. "This is suggestive that they're being depleted even in the few months since they were launched from the primary body. We think these little guys have a short lifetime."

Hubble's sharp vision also spied a chunk of material close to the comet, which may be the first salvo of another outburst. The remnant from still another flare-up, which may have occurred in 2012, is also visible. The fragment may be as large as Comet 332P, suggesting the comet split in two.

The remnant object wasn't spotted until December 31, 2015, by the Pan-STARRS (Panoramic Survey Telescope and Rapid Response System) telescope in Hawaii, in work supported by the Near-Earth Object Observations program in NASA's Planetary Defense Coordination Office. That discovery prompted Jewitt and colleagues to request Hubble time to look at the comet in detail. Around the same time, astronomers around the world began to notice a cloudy patch of material near the comet, which Hubble later resolved into the 25 pieces. 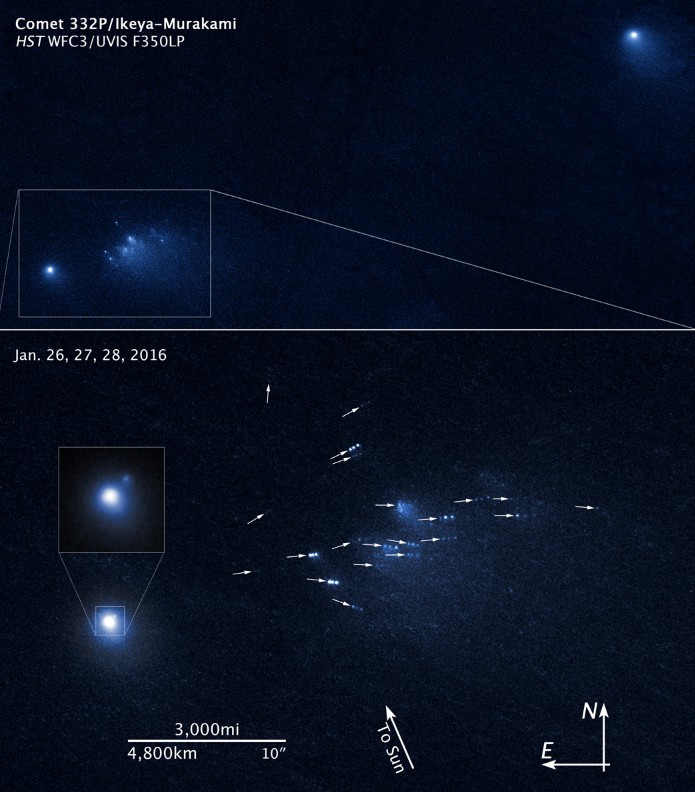 "In the past, astronomers thought that comets die when they are warmed by sunlight, causing their ices to simply vaporize away," Jewitt said. "Either nothing would be left over or there would be a dead hulk of material where an active comet used to be. But it's starting to look like fragmentation may be more important. In Comet 332P we may be seeing a comet fragmenting itself into oblivion."

"Hubble's best previous glimpse at a fragmenting comet came during Advanced Camera for Surveys (ACS) observations of 73P/Schwassmann-Wachmann 3 (73P) in April 2006," said collaborator Harold Weaver of the Johns Hopkins University Applied Physics Laboratory in Laurel, Maryland. "In those observations, Hubble witnessed a comet with more than 60 named pieces. The Hubble images showed unprecedented detail of 73P's breakup, but the comet wasn't observed long enough to document the evolution of the fragments over time, unlike the case of 332P."

The researchers estimate that Comet 332P contains enough mass to endure another 25 outbursts. "If the comet has an episode every six years, the equivalent of one orbit around the Sun, then it will be gone in 150 years," Jewitt said. "It's the blink of an eye, astronomically speaking. The trip to the inner solar system has doomed it."

Featured image: This NASA Hubble Space Telescope image reveals the ancient Comet 332P/Ikeya-Murakami disintegrating as it approaches the sun. The comet debris consists of a cluster of building-size chunks (center) that form a 3,000-mile-long trail. The fragments are drifting away from the comet. The main nucleus of Comet 332P is the bright object at lower left. This observation was made on Jan. 27, 2016, with Hubble's Wide Field Camera. Credits: NASA, ESA, D. Jewitt (UCLA)