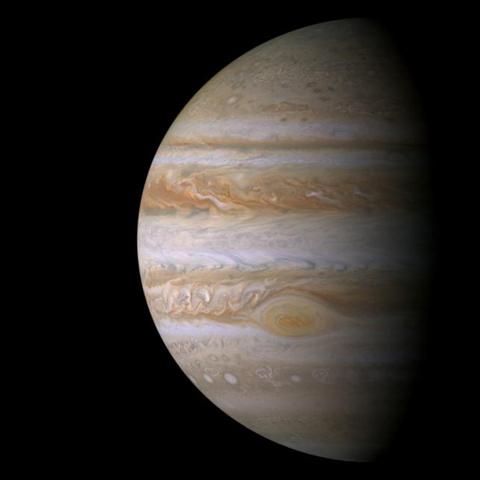 Planet Jupiter began the month of June 2013 being positioned very low in the west sky just after sunset. However soon it will disappear into the solar glare, as Jupiter is approaching the Sun for a solar conjunction on June 19, 2013. At that time Jupiter will pass behind the Sun, an event that happens about every thirteen months. 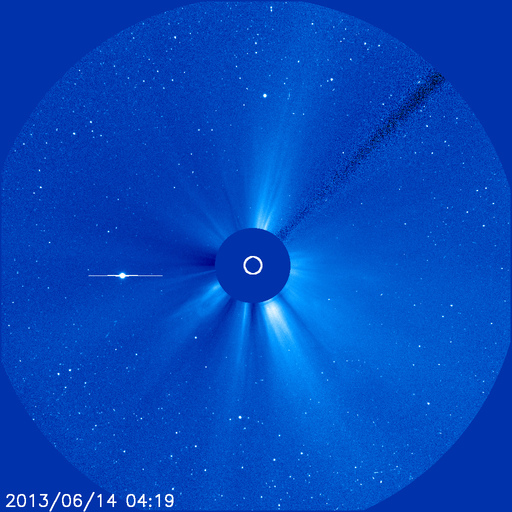 Image showing Jupiter (brightest spot to the left of the Sun) in relation to the Sun (center of the image) on June 14, 2013 as seen by SOHO (Credit: SOHO\NASA)

Because Jupiter`s orbit is somewhat ecliptic, it often passes either slightly above or below the Sun, when observed from our planet. Interestingly, on June 19, 2013, Jupiter will pass directly behind the solar disk and get totally obscured by the Sun, which occurs only twice within the planet`s 12-year orbit around the Sun.

Sadly this event will not be visible to us on Earth because of the strong solar glare, but it will be visible to coronagraphs like SOHO. Jupiter will become visible in the morning sky again by the end of June.

A conjunction occurs when two astronomical objects have either the same right ascension or the same ecliptical longitude, normally when observed from the Earth. In the case of two objects that always appear close to the ecliptic – such as two planets, or the Moon and a planet, or the Sun and a planet – this implies an apparent close approach between the objects as seen on the sky. In contrast, the term appulse is defined as the minimum apparent separation on the sky of two astronomical bodies.

Conjunctions therefore involve two Solar System bodies, or one Solar System body and one more distant object such as a star. A conjunction is an apparent phenomenon caused by perspective only: there is no close physical approach in space between the two objects involved. Conjunctions between two bright objects close to the ecliptic, such as two bright planets, can be easily seen with the naked eye and can attract some public interest.

Featured image: Cassini Jupiter Portrait – This true color mosaic of Jupiter was constructed from images taken by the narrow angle camera onboard NASA's Cassini spacecraft on December 29, 2000, during its closest approach to the giant planet at a distance of approximately 10 million kilometers (Credit: NASA/JPL/Space Science Institute)