A drought has left areas of the Marshall Islands facing “dire” water shortages with aid agencies scrambling to ship relief to affected communities.  The International Organization for Migration (IOM) warned that unusually low rainfall in one of the world’s remotest ocean communities is leading to a precarious humanitarian situation for thousands of people. With almost no rainfall since late last year on some of the northern islands, the government was forced to declare State of Emergency in its northern islands, as villages began rationing water to preserve supplies. Crops, plants and trees have suffer substantial damage, so about 3200 people are facing food shortages as well.

According to IOM’s drought assessments, some families living on a gallon (3.8 litres) of water per day – barely half of the international standard for emergency water requirements, and often the precursor to serious health conditions. New cases of diarrhoea, conjunctivitis, influenza and other illnesses were reported. Government operated ships started transporting relief materials provided by the U.S. Agency for International Development (USAID), including full water containers and hygiene kits stocked in IOM-managed warehouses, to 567 households in the worst-affected communities. The worst affected is Mejit Island with 3,700 people without drinking water. 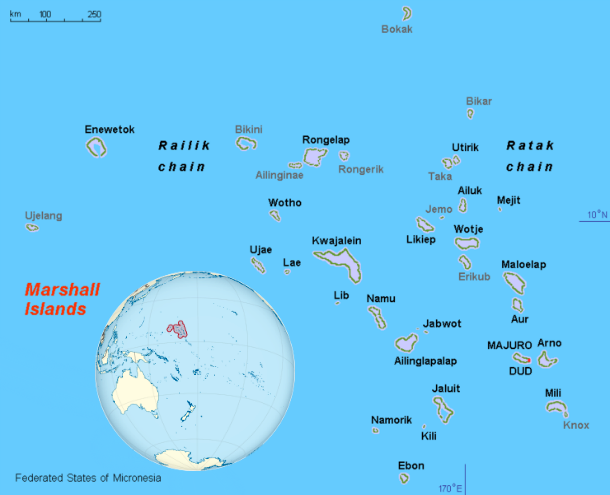 The United States and Australian governments this week announced $100,000 in emergency aid grants, with the US also donating four reverse osmosis water-making units which are expected to arrive in the next few days. Beside rainwater and water wells, inhabitants of this remote and fragile environment also use liquid from coconuts.

A majority of the islands’ land mass is at sea level. The country consists of 29 atolls and 5 isolated islands. Island nations are seen as a touchstone of environmental crisis, as sea levels rise in the region, leading to predictions that many such communities will be forced into exile in coming years.