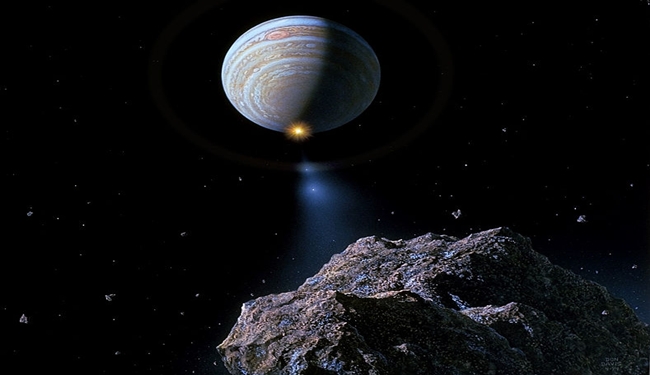 During July 1994, comet Shoemaker-Levy 9 collided with Jupiter after breaking apart. Comet's fragments of up to 2 km in diameter struck the gas giant over days leaving prominent scars for months. Being first direct observation of such an unusual extraterrestrial collision, it received wide media coverage and was closely observed by astronomers. 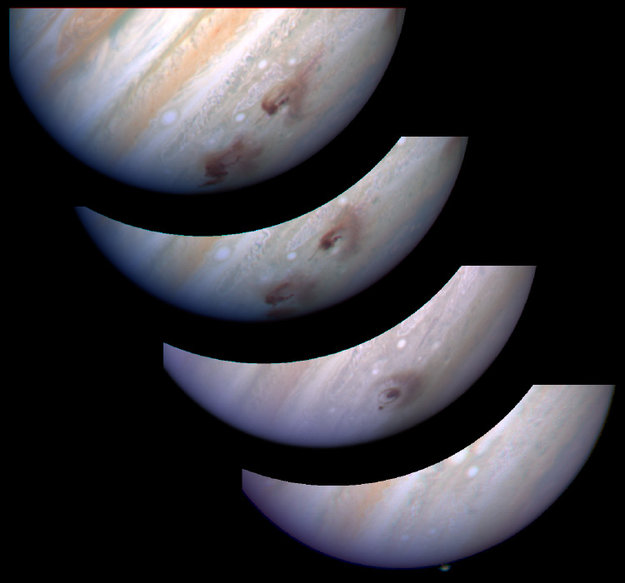 This mosaic of WFPC-2 images shows the evolution of the G impact site on Jupiter (the 21 comet fragments of Shoemaker-Levy 9 were each assigned a corresponding letter to identify the impact site; G represents the 7th fragment to strike the planet. It was also the largest impact.). Credits: R. Evans, J. Trauger, H. Hammel and the HST Comet Science Team

After being launched in 1995, observations by ESA’s Infrared Space Observatory had shown presence of water in Jupiter's upper atmosphere — planet's stratosphere 15 years ago. Among several hypotheses, possibility of water rising from internal source was rejected given it cannot escape Jupiter's troposphere. Another possible source of water would be a steady rain of small interplanetary dust particles onto Jupiter. But, in this case, the water should be uniformly distributed across the whole planet and should have filtered down to lower altitudes.

There was a consensus among astronomers that water came from outside, through impact of an external body — pointing Shoemaker-Levy 9 to be responsible. Yet there wasn't evidence to support this speculation. 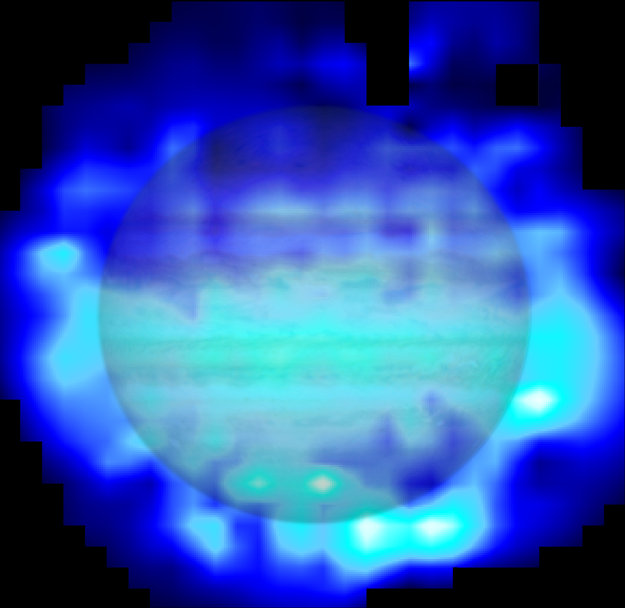 Distribution of water in the stratosphere of Jupiter as measured with ESA's Herschel space observatory with the PACS instrument at 66.4 microns. The data have been superimposed over an image of Jupiter taken at visible wavelengths with the NASA/ESA Hubble Space Telescope. Credits: Water map: ESA/Herschel/T. Cavalié et al.; Jupiter image: NASA/ESA/Reta Beebe (New Mexico State University)

The challenge was to map the vertical and horizontal distribution of water’s chemical signature, which Herschel's sensitive infrared telescope was able to tackle. Based on observations by HIFI and PACS instruments on board Herschel observatory during 2009-10, mission scientists explored water in Jupiter's atmosphere. Thibault Cavalié of the Laboratoire d’Astrophysique de Bordeaux, lead author of the paper published in Astronomy and Astrophysics said,

“Only Herschel was able to provide the sensitive spectral imaging needed to find the missing link between Jupiter’s water and the 1994 impact of comet Shoemaker-Levy 9. According to our models, as much as 95% of the water in the stratosphere is due to the comet impact."

Herschel’s observations found that there was 2–3 times more water in the southern hemisphere of Jupiter than in the northern hemisphere, with most of it concentrated around the sites of the 1994 comet impact. Additionally, it is only found at high altitudes. Dr Cavalié further said,

“All four giant planets in the outer Solar System have water in their atmospheres, but there may be four different scenarios for how they got it. For Jupiter, it is clear that Shoemaker-Levy 9 is by far the dominant source, even if other external sources may contribute also.”

To explore and map the distribution of Jupiter’s atmospheric ingredients in detail, ESA’s JUpiter ICy moons Explorer (JUICE) mission is set to launch in 2022, with expected arrival at Jupiter in 2030.

The European Space Agency's Herschel Space Observatory (formerly called Far Infrared and Sub-millimetre Telescope or FIRST) has the largest single mirror ever built for a space telescope. At 3.5-metres in diameter the mirror will collect long-wavelength radiation from some of the coldest and most distant objects in the Universe. In addition, Herschel is the only space observatory to cover a spectral range from the far infrared to sub-millimetre.

The view from a fragment of the Shoemaker / Levy 9 comet which fell into Jupiter piece by piece over several days in Late July 1994, around the 25th anniversary of Apollo 11. Acrylic on board for NASA Ames.