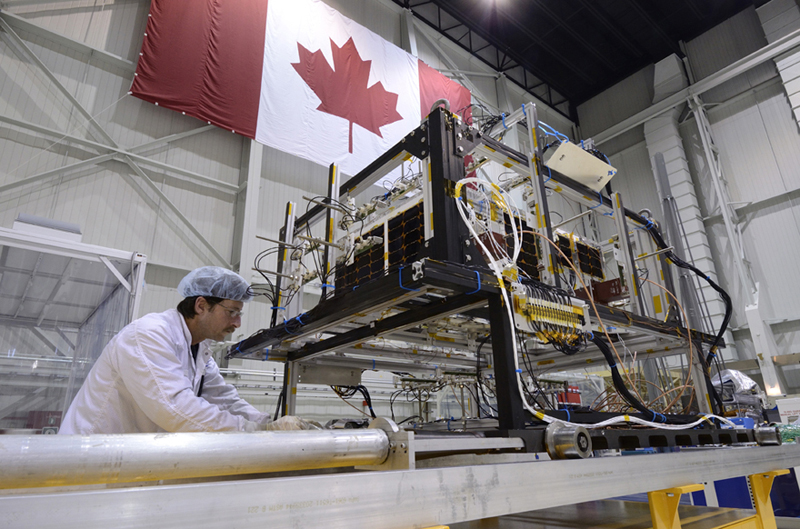 Canada launched world’s first space telescope specifically designed to spot potentially hazardous asteroid and satellites. NEOSSat space satellite – Near Earth Object Surveillance Satellite – was launched on Monday, February 25, 2013 atop an Indian rocket. It now circles the globe every 100 minutes, scanning space near the Sun to pinpoint asteroids that may someday pass close to Earth. NEOSSat is also sweeping the skies in search of satellites and space debris as part of Canada’s commitment to keeping orbital space safe for everyone. 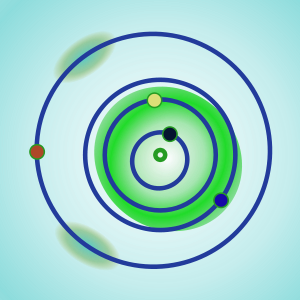 The Aten asteroid group (shown in green). The Sun is in the center, with the planets Mercury (black), Venus (yellow), Earth (blue) and Mars (red). Author: Andrew Buck

Region of space NEOSSat aims to explore lies between 45 and 55 degrees away from the Sun, well inside Earth’s orbit. Orbiting nearly 800 km above the Earth’s surface it will monitor two groups of asteroids – Aten and Atira.

The proximity of those two asteroid groups to the Sun makes them hard to spot from Earth. Members of both groups started out as asteroids in the main asteroid belt, between Mars and Jupiter, but gravitational interactions or collisions slowed these asteroids down to begin their spiral in toward the Sun.

The Atira group asteroids have orbits that fall entirely inside Earth’s orbit. The Atens’ orbits occasionally cross that of Earth. Given the distances involved, NEOSSat will be able to detect Atens or Atiras about 300 m across or larger. The Atens appear to be the more worrisome of the two groups NEOSSat will observe.

Due to its lofty location, it is not limited by the day-night cycle, and can operate 24/7. The hundreds of images that NEOSSat will generate per day will be downloaded and analyzed by the University of Calgary’s NEOSSat science operations centre. Through NEOSSat, Canada will contribute to the international effort to catalogue the near-Earth population of asteroids producing information that will be crucial to targeting new destinations for future space exploration missions. 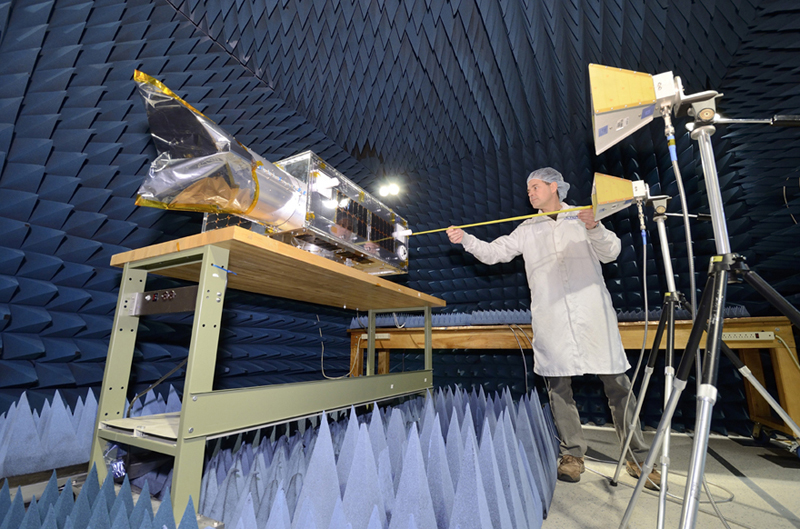 An employee is setting up radio frequency feed horns pointing at NEOSSat in a small anechoic chamber at the David Florida Laboratory located in Ottawa, Ontario. This will test how the satellite reacts to radio frequency signals. NEOSSat is a dual-mission microsatellite designed to detect potentially hazardous Earth-orbit-crossing asteroids and track objects that reside in deep space. It is also the first implementation of Canada’s generic multi-mission microsatellite bus. (Credit: Janice Lang, DRDC)

NEOSSat was originally scheduled for launch in 2010, but delays set it back until 2013. Alongside 6 more satellites, NEOSSat was launched on February 25, 2013, from the Satish Dhawan Space Centre in Sriharikota, India, at 12:31 UTC aboard an Indian PSLV-C20 rocket.