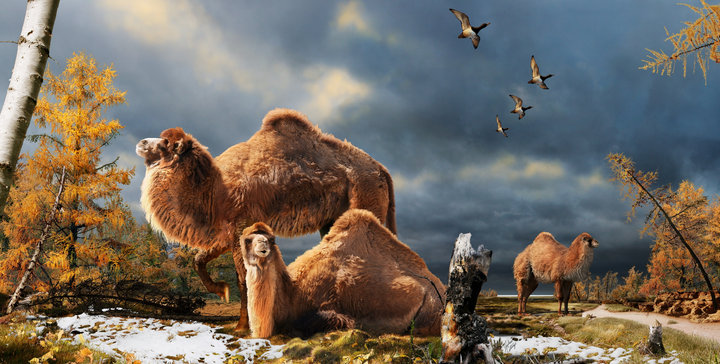 Canadian research team, helped by scientists at The University of Manchester, discovered the first evidence of an extinct giant camel in the High Arctic. The 3,5 million year old fossil was identified using new collagen fingerprinting from bone fragments unearthed on Canada’s High Arctic Ellesmere Island. It’s the furthest North a camel has ever been found.

The fossils were collected during summers of 2006, 2008 and 2010 by Dr. Natalia Rybczynski, a vertebrate paleontologist with the Canadian Museum of Nature. 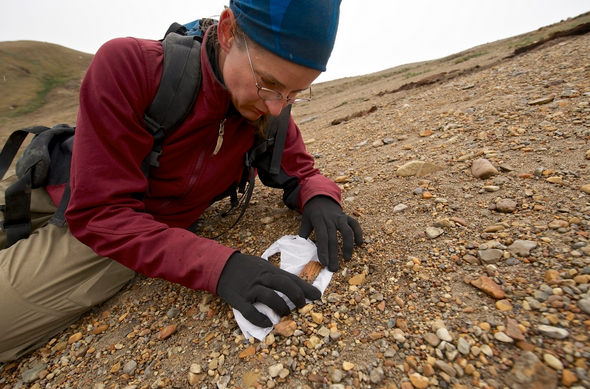 Dr. Natalia Rybczynski  collects a fossil bone at the Fyles Leaf Bed site on Ellesmere Island in 2008. The fossil in situ looks very similar to wood. She uses toilet paper to wrap the fossil for transport to the base camp. CREDIT: Martin Lipman, Canadian Museum of Nature.

The camel bone fragments were collected from a steep slope at the Fyles Leaf Bed site, a sandy deposit near Strathcona Fiord on Ellesmere Island. Other fossil finds at the site suggest the High Arctic camel was living in a boreal-type of forest environment, during a global warm phase on the planet. 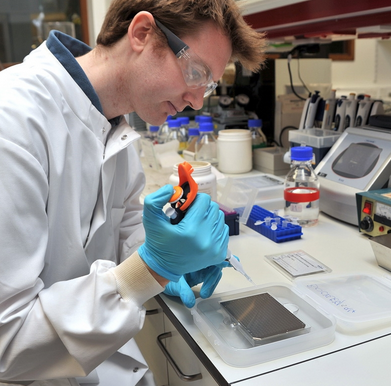 Dr Buckley carrying out the process of collagen fingerprinting to determine which species the bone fragments belong to.
Credit: The University of Manchester

At first, it was unclear which species the bones they found came from so they asked the help of Dr. Mike Buckley from Manchester Institute of Biotechnology. He used the pioneering technique called “collagen fingerprinting” to identify the animal. Dr. Buckley compared the profile he found with the 37 mondern mammal species as well as that of a fossil camel found in Yukon.

He found that the collagen profile for the High Arctic camel was almost an identical match to the modern day Dromedary as well as the Ice-Age Yukon giant camel. The collagen information, combined with the anatomical data, demonstrated that the bone fragments belonged to a giant camel as the bone is roughly 30% larger than the same bone in a living camel species.

Dr. Rybczynski said: “These bones represent the first evidence of camels living in the High Arctic region. It extends the previous range of camels in North America northward by about 1,200 km, and suggests that the lineage that gave rise to modern camels may have been originally adapted to living in an Arctic forest environment.”

“This is the first time that collagen has been extracted and used to identify a species from such ancient bone fragments. The fact the protein was able to survive for three and a half million years is due to the frozen nature of the Arctic. This has been an exciting project to work on and unlocks the huge potential collagen fingerprinting has to better identify extinct species from our preciously finite supply of fossil material.” – Dr. Buckley

The specimen found are spectacular, said Dr. Roy Wogelius from The University of Manchester’s School of Earth, Atmospheric & Environmental Sciences after he analysed the mineral content of the bones. His findings suggest that mineralization worked along with cold temperatures to help preserve the proteins in the bones. “This specimen is spectacular, and provides important clues about how such exceptional preservation may occur”, he said. 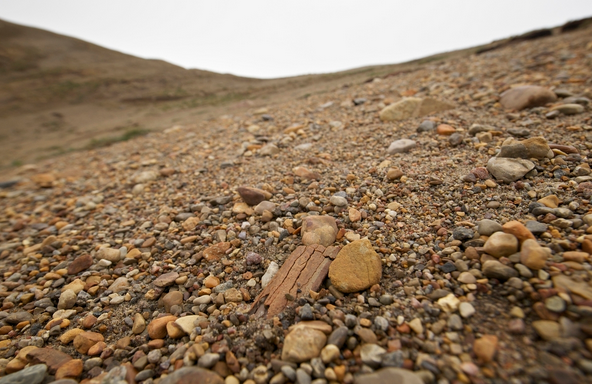 A fragment of the camel fossil lying as it was found at the Fyles Leaf Bed site. The fossil looks very similar to wood. The fossil evidence for the camel consists of about 30 bone fragments, which together form part of a limb bone. Found on Ellesmere Island, in Canada’s High Arctic, this is the northernmost discovery of camels in the Arctic, about 1,200 km further north than the previously described Yukon camel. CREDIT: Martin Lipman, Canadian Museum of Nature

Dr. Rybczynski said the discovery sheds new light on modern camels: “We now have a new fossil record to better understand camel evolution, since our research shows that the Paracamelus lineage inhabited northern North America for millions of years, and the simplest explanation for this pattern would be that Paracamelus originated there. So perhaps some specializations seen in modern camels, such as their wide flat feet, large eyes and humps for fat may be adaptations derived from living in a polar environment.”

The identification of the High Arctic camel is described in the March 5th, 2013 edition of the online journal Nature Communications.

The bones of the High Arctic camel are housed in the Canadian Museum of Nature’s research and collections facility in Gatineau, Quebec on behalf of the Government of Nunavut.

Other contributors to the report include Dr. C. Richard Harington, Researcher Emeritus at the Canadian Museum of Nature, Dr. Roy Wogelius at the University of Manchester and Dr. A.J. Hidy at Dalhousie University.

Featured image: Camel Illustration – High Arctic camel on Ellesmere Island during the Pliocene warm period, about three-and-a-half million years ago. The camels lived in a boreal-type forest. The habitat includes larch trees and the depiction is based on records of plant fossils found at nearby fossil deposits. CREDIT: Julius Csotonyi.